The Power of the Old Cathedral: Haiti Cathedral Competition

by Cindy Michel, appearing in Volume 24

Notre Dame l’Assomption served as the cathedral of Port-au-Prince for over a century, from its predecessor, a modest yet dignified brick building with a small central tower, to its twentieth-century replacement, an impressive twin towered structure which collapsed in the devastating 2010 earthquake centered near Port-au-Prince. A competition for the design of a new cathedral was held by the Roman Catholic Archdiocese of Port-au-Prince, with the support of Faith and Form Magazine and the Institut de Sauvegarde du Patrimoine National (ISPAN), the Haitian government agency charged with the safeguarding of structures and sites of historical significance, such as the cathedral.

Through a blind judging process, over 130 submissions were reviewed by the panel of judges, who chose three winning submissions and one honorable mention.

The first place submission proposes a limited urban intervention with an economical, but effective redesign of Place de la Cathedrale which has historically been used as an outdoor market. The proposal maintains the existing main facade and narthex of the cathedral, reinforced with side buttress towers. The towers reestablish a twin tower silhouette to the cathedral façade, but the contrast between the rich architectural and iconographic remnants of the front façade and the bleak new buttress towers is atypical of Haitian Catholic architecture and seems to speak to the contemporary historic preservation ethic of contrast. 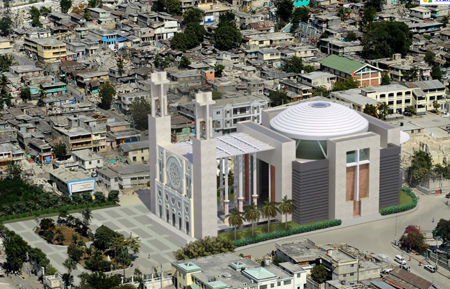 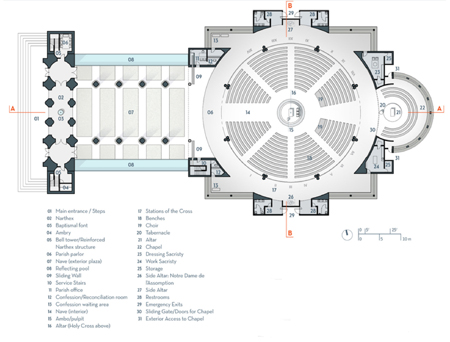 The centralized plan is particularly inward focused with no windows save for the stained glass at the apse and a “ring of translucent glass under the dome.” Its mausoleum-like form could be a rich typological and allegorical reference, but the design lacks the lightness and connectivity of the old cathedral which would help to make it less a literal tomb. The interior screen featuring the Stations of the Cross brings a welcomed level of iconography missing from the exterior, but it is likely the screen would have to be in some other material than wood given the issues of deforestation in Haiti. The proposal is promising in form and could more fully and unapologetically embrace the spirit of Haitian Catholic architecture as it develops.

The second place submission proposes an elaborate site design that preserves the ruins of the collapsed cathedral in situ as a park while relocating the cathedral to the western edge of the site in a scalloped shaped plan with “half round” seating in “a buried cathedral.” The proposed cathedral does not take a recognizable form of a church, but instead resembles the bow of a ship and incorporates no discernible interior or exterior iconography save for several crosses. 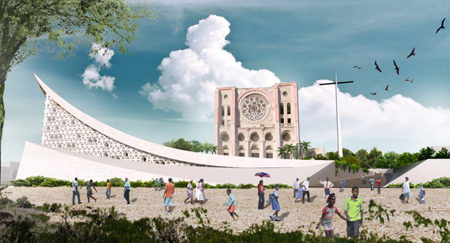 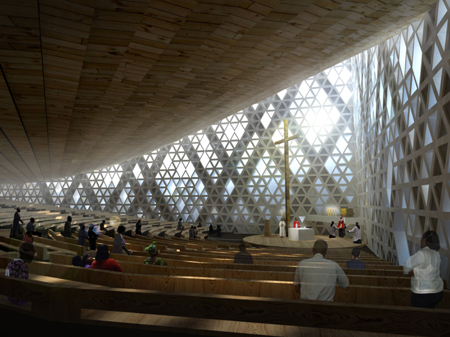 The proposal is quite alien, with little to signal that the structure is the National Catholic Cathedral of Haiti. A “buried cathedral” is a curious idea considering the emergency efforts to rescue people buried within collapsed buildings. To bury the cathedral seems inappropriate.

The third place winner leaves the nave ruins while proposing a monumental pyramid over the crossing of a new cathedral. 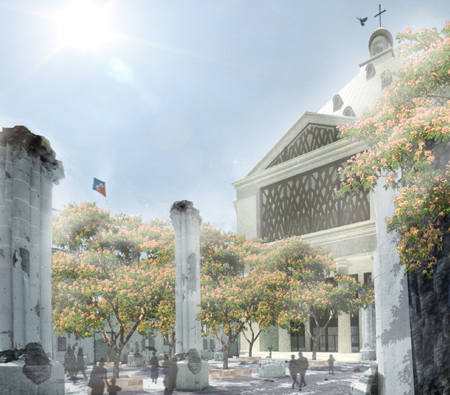 The submission receiving an honorable mention proposes new urban density around the cathedral square with covered colonnades. It proposes rebuilding the former cathedral as it was.

The spectrum of winners shares one definitive aspect: they maintain the façade of the collapsed cathedral, as it currently exists, in whole. In the winning proposals, the façade of the collapsed cathedral is reinforced with buttress towers, kept in situ as a ruin, reinforced at the head of a new atrium, or rebuilt with the same design. This commonality is an acknowledgement of the power the old cathedral held as a symbol of Port-au-Prince and Haiti, and particularly as a symbol of ‘the Catholic Church in Haiti.’

It remains to be seen to what degree such a definitive, clear, and iconic statement of the Catholic Church in Haiti can develop from the winning proposals. The competition itself though, has provided a rare sense of possibility that a Haitian reconstruction effort can be of civic and national merit; a prescient and fundamental hope as a number of the capital’s civic buildings, including the National Palace, have yet to be rebuilt.

The winning entries may be viewed online at: http://competition.ndapap.org/winners.php?projID=1028

Ms. Michel is Haitian-American and lives in New York City. She practices architecture at Ferguson & Shamamian Architects and remains active in projects in Haiti through the non-profit organization HIBISCUS. Ms. Michel was awarded a CNU Charter Award of Excellence in 2011 for her master’s thesis project ‘From Settlement to City: A Masterplan for Cap-Haitien, Haiti.’