Fearful of Our Architectural Patrimony

The draft document of Domus Dei was presented to the Catholic Bishops of the United States at their November 1999 meeting. It is intended to be a properly sanctioned replacement for Environment and Art in Catholic Worship, a 1978 tract that is generally acknowledged to be outdated in its promotion of bland Modernist structures and iconoclastic liturgical settings. The current draft of the more aptly titled Domus Dei is an improvement on its predecessor. However, the draft document falls short of its purpose. This is particularly clear in view of the growing body of architects who prefer to speak the Church’s timeless Latin in contemporary ecclesiastical buildings, rather than the trendy vernacular of Modernism.

Domus Dei recognizes that many architectural forms have been developed over the past two thousand years. It hints that this Catholic treasure of architectural paradigms might inform new Catholic buildings today. Nevertheless, the document sets up two roadblocks that would be confusing to architects, priests, and building committees. These are the discordant concepts of obligatory multi-culturalism and anti-intellectual fear of history.

It is ironic that a proposed Catholic document would diminish the all-embracing aspect of our faith by proposing cultural sectarianism as an ideal. Second, it is odd that a review of two thousand years of continuity and tradition emanating from Christ—and going back further through Jewish roots—should be ambivalent, even naïve, about the history of buildings that have had a dominant impact on the physical expression of Western culture. Rather than serving as a guide for helping the Church build appropriate structures for the celebration of liturgy, Domus Dei creates unnecessary fears about exclusion and expressions of cultural dominance.

As written, Domus Dei will not be fully comprehensible to its intended audience. This includes architects, but more important, parishioners on a building committee and their pastor. The pastor generally has a layman’s comprehension of architecture and the laity often have a limited understanding of both architecture and liturgy. Therefore, Domus Dei must provide guidance for the spiritual, practical, and cultural decision-making required to build a church and to create its artistic embellishment.

Unfortunately, the draft document of Domus Dei does not provide clear guidance. Instead, the information is clouded by concern about expressing cultural hegemony through traditional architectural forms. Its pages express fear that a recognizable aesthetic would threaten cultural diversity. We must remember, however, that diverse peoples coming together as one body has been a distinction of the Catholic Church from its foundation by Christ. This characteristic was emphasized at Pentecost. Cultural infusions from diverse cultures have always informed Catholic building and art; the current multiplicity should be seen as a life-giving factor, not a source of anxiety. 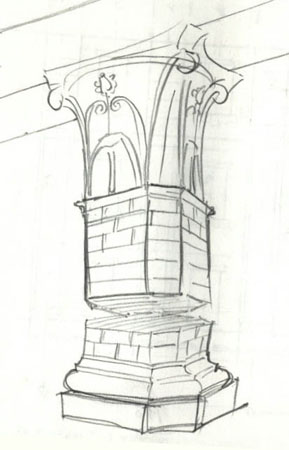 The continued diversification of the Catholic Church in the United States through immigration has provided, and still does provide, opportunities to synthesize buildings of architectural unity. Domus Dei vaguely suggests accommodating individualities rather than striving for architectural unity within a building. Without being articulate, Domus Dei idealizes a patchwork approach of mingling multiple forms while questioning the validity of Catholic historical paradigms such as those published in books like David Watkin’s A History of Western Architecture.

In light of my interest in the current secular and sacred debate about utilizing paradigms in contemporary architectural expression, I am particularly concerned about the section that surveys architectural history subtitled “Christian Cultures Developed in Various Buildings” in Domus Dei pages 14-20. This section contains many comments casting doubt on the importance of Catholic cultural patrimony. Such comments may not be intended to question the use of ideas from earlier buildings as a resource for new structures; however, one is left with a sense of admonition, not encouragement. This section also presents cultural diversity in exclusive, not inclusive, terms. Rather than providing positive direction, these underlying assumptions would cause confusion.

It is obviously not the task of Domus Dei to teach the vast history of Catholic construction in six pages. Every year there are scores of popular and scholarly books published on this subject. It is disappointing, however, to find that Domus Dei’s necessarily brief treatment of European architecture conveys a dismissive air. In addition, it is heavily laden with atonement for alleged European domination of indigenous cultures rather than acknowledgment of any benefit to the world through the spread of Catholicism. The text also seems to be oblivious to the invigorating influence indigenous art forms have had on colonial developments in various regions.

Domus Dei should use the valuable six pages about history to state unequivocally that from 300 A.D. until 1850 the construction of Catholic churches and institutions has comprised the backbone of seminal architectural developments in the Mediterranean Basin, Europe, and the Americas. Even accounting for concern about over-riding indigenous cultures, Catholic developments, whether Byzantine, Romanesque, Gothic, or Renaissance, were stimulated by interaction with indigenous non-Christians. Roman, Islamic, and Meso-American architecture have greatly informed Catholic developments, as opposed to being merely subjected to this force.

The Renaissance, which still greatly influences world culture, is dismissed in three lines. Churches are said to have paralleled secular building types. Surely the majority of architectural historians, who are predominantly agnostics, expound the opposite view. Catholic churches and institutional buildings were the prime media through which the three hundred year architectural period we call Renaissance and Baroque was initiated and refined. Domus Dei insinuates an opposite claim by implying that Renaissance churches were influenced by castles, opera houses, and theaters. Castles were medieval; they were built even before the Gothic. Opera was not invented until one hundred and fifty years after the Renaissance began. Theaters were a rare occurrence even during the late Renaissance. Such trite statements, based on anachronisms, cast doubt on a period that priests and laity know to have been important. It conveys a message that the lessons of the Renaissance are forbidden fruit. 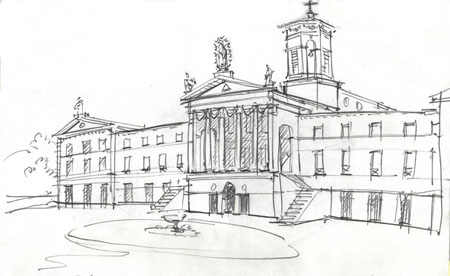 In the section of Domus Dei on history there is much space given to an apology for assumed abuses by Eurocentric Catholic conquerors at the expense of indigenous populations. This anxiety is clearly a concern of the writers. The important question is, should it be an overriding problem in the minds of the people that the document is being written to serve? In my experience, this is not a critical issue, certainly not for the Mexican-Americans I have worked with. Domus Dei is being written specifically for those who would build churches in the United States, not in Africa, Asia, or even Central or South America. This perceived remorse should not be laid upon the United States where Catholics struggled to be independent of a dominant Protestant culture. The challenge we face currently is how to express independence from a dominant secular and commercial culture.

There is plenty of debate over the consequences of the Propaganda Fide phenomenon historically, but Domus Dei is being written for the Church today. Its central issue should be how to build beautiful, life-giving churches, schools, rectories, and parish halls for the glory of God. These structures should encourage diverse peoples to come together as one Catholic body.

Thanks to the blessing of continued immigration to the United States, the people of diversity are now the colonizers and they are bringing new life to the American Church. In my experience as an architect, such immigrants do not feel oppressed by the prospect that a new church might emulate a Renaissance model from Rome or a Romanesque paradigm from France. On the contrary, they seem to relish such an idea. Increasingly, the “indigenous group” of Anglo-Americans are also excited by the prospect that a new Catholic church might proclaim a recognizable image of a Catholic structure instead of an insipid copy of a corporate building.

Domus Dei will be an influential document due to growing opportunities to erect new buildings to support evangelization of the Catholic Church in the United States. It will also bear the stamp of the Catholic Bishops of the United States. I hope that Domus Dei will be extensively revised or be begun anew so that it will provide clear and positive guidance to those who build.

The most important criterion in designing churches is the ability to achieve a sacred building. From the outside a church must vividly symbolize its consecration in contrast to adjacent secular buildings. On the interior, it must convey the beauty of a sanctuary that uplifts and challenges spiritual devotion. Although sacredness is inherently intangible, and methods of achieving it vary widely, the Catholic tradition has developed a vast set of cultural references over two millennia. These prompt us to recognize sacred themes when we perceive them. The skillful use of such resources, whether expressed through the abstract language of architecture or the highly specific medium of iconographic imagery in the arts, has the potential to elicit the sense of wholeness and unity worthy of Domus Dei.

Thomas Gordon Smith, AIA, is principal of the firm Thomas Gordon Smith Architects and is professor of architecture at the University of Notre Dame. His design work at a Benedictine monastery in Oklahoma, a seminary in Nebraska and other ecclesiastical and civic projects can be seen at www.tgsarchitect.com