Dedicated to the memory of Michele Piccirillo, O.F.M., a priest and friar who committed his life to archaeological research, this compilation includes studies ranging from wall paintings in the Abbey of Saint Mary in the Kidron Valley of Jerusalem (Crusader period), to the architectural reconstruction of the Church of Bishop John at Khirbet Barqa (Byzantine period), map mosaics depicting sailing in the Dead Sea (Byzantine period), and inscriptions in Elijah’s Cave on Mount Carmel (ninth century BC through the twentieth century AD). I will consider only the research on Elijah’s Cave, composed by Asher Ovadiah (Tel Aviv University) and Rosario Pierri, O.F.M. (Studium Biblicum Franciscanum). The article is broken into two parts: first, a description of the cave and its meaning, and second, an examination of 22 carved inscriptions of the 180 total inscriptions. 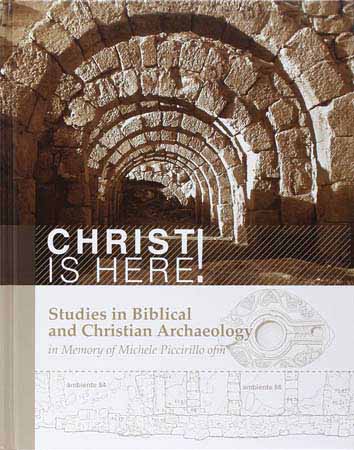 On the western outskirts of Haifa, Mount Carmel is the biblical location where, in the ninth century BC, the Prophet Elijah repaired the altar of the Lord that had been torn down next to the pagan altar to Ba’al, and where he performed a miracle exemplifying the power of the one true God.1 In the presence of King Ahab, the people of Israel, and the pagan prophets, Elijah placed a bull of sacrifice upon the altar and called upon the Lord, and thus fire fell and burned up the sacrifice. Mount Carmel became a destination for hermits and remained a sacred place for pagans in the centuries before and after Christ. There is evidence that a temple on the site was visited by the Greek philosopher Pythagoras in the sixth century BC.2

The first Christian chapel on Mount Carmel may have been built in AD 83, and a larger church was commissioned by Saint Helena in the fourth century.3 Christian and Jewish pilgrims visited the site continuously, pious hermits inhabited the caves, a monastery was built in the twelfth century, and a synagogue dedicated to Elijah was erected in the thirteenth century.4 After the massacre of Fra Prospero and his small company of Carmelites in 1635, Muslim monks used the cave as a mosque. Over the last few centuries, Elijah’s Cave has been a pilgrimage site for Jews, Christians, Muslims, and Druze. The Stella Maris Basilica, standing at the summit of Mount Carmel today, was designed by John Baptist Frascatti in 1836 for the Discalced Carmelites, who profess their original founder to be the Prophet Elijah.5

Situated on the northwest slope of Mount Carmel, Elijah’s Cave was the original asylum and oratory for Elijah and his early followers, and where he prepared for the encounter with the prophets of Ba’al.6 The cave is in the shape of a parallelogram, measuring forty-seven feet long, twenty-eight feet wide, and fifteen feet high. Cuts in the stone walls and floor indicate that the cave was enlarged and improved throughout antiquity. A second rectangular room, or secondary grotto, is attributed to the cell of the Prophet Elijah. Eight pages of the study are excerpts and analysis of historical literary sources mentioning Elijah’s Cave. The earliest written record of the cave, surprisingly, is from the twelfth century, when the Russian “Abbot Daniel” refers to the cave as part of his pilgrimage to the Holy Land in AD 1106.

Part Two of the work by Ovadiah and Pierri describes the twenty-two best-preserved inscriptions in Elijah’s Cave. The authors methodically analyze the names (graffiti), their dimensions and geographic origins, their translation, and their interpretation. The typical inscription (in Greek) reads something like “Remembered be Alaphaios (the younger), remembered be.”7 The epigraphic content of the cave is one of the richest troves of Greek inscriptions in Israel from the first through the sixth centuries AD. But unless one is an archeologist or is intrigued by variations on names and lettering in antiquity, the detailed analysis is lackluster. One fragment of artistic interest that remains is the foot of a colossal marble statue, the rest of which has been lost. It is believed to have been a figure of Zeus of the Carmel from the second century AD, which could have stood within the apse niche of the cave.

Ovadiah and Pierri illustrate their study with a plan and sections of the cave, photographs, and diagrams depicting the layout of the inscriptions on the west and east walls of the cave. The book’s compilation of articles (some in English, some in Italian) is very technical and oriented toward archaeologists, but it is nonetheless inspiring to see recent research on Elijah’s Cave and its history in the Holy Land and for the Carmelite Order. “Ut vivat, crescat et floret.”

Thomas D. Stroka is an architectural designer in Indiana.