The Revelation Becomes Stone in the Cathedral of Saint Bavo

by Laura Bolondi, appearing in Volume 25

A few years ago—more than a century after the laying of the first stone—the Sagrada Família Church in Barcelona was consecrated. It is probably the most famous example of sacred modern architecture in Europe, but it is not the only church to have been built at the end of the nineteenth century. Many other churches and some cathedrals were built in that century, a period that is incorrectly considered lacking in religious feeling as a result of the Enlightenment. One of these buildings is the Cathedral of Saint Bavo in Haarlem in the Netherlands. This paper reviews the most important construction phases and describes the symbolism of the building, which is inspired by the final chapters of the Book of Revelation. 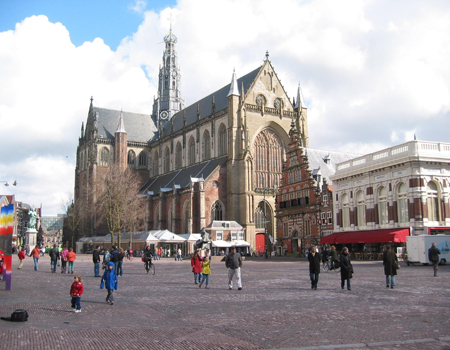 Architect Joseph T. Cuypers was just thirty-two years old when he took on the most important assignment of his life: to design the new Catholic cathedral of the Haarlem-Amsterdam diocese. He was the son of one of the most famous architects in the Netherlands; his father, Pierre, designed the imposing train station of Amsterdam.

Probably Joseph Cuypers was conscious that his professional life was going to be dominated by this project. For the following thirty years he would take care of this new and majestic building. It was destined to pass through the biggest events of the twentieth century.

He graduated in the first Faculty of Architecture of his country, the Bouwkunde Faculteit of the Delft Technische Universiteit. His design is reminiscent of the famous magistri of the Middle Age cathedrals but is also deeply influenced by the modern architectural movements of the nineteenth century.

Joseph Cuypers’s personal life became entwined with the cathedral and, from a wider point of view, with the history of Catholic Church. The decision to build such an important construction was a consequence of the restoration of the Catholic Diocese of Haarlem by Pope Pius IX in 1853. The apostolic succession had been interrupted during the bloody conflict against Calvinists. During the night of May 29, 1578, Calvinists occupied the fourteenth-century Cathedral of Saint Bavo in the old city center (which is still under their protection), and they obliged many Catholics to convert to Protestantism. The reborn Dutch Church needed to reassert its power and presence in the territory not only symbolically, but practically. 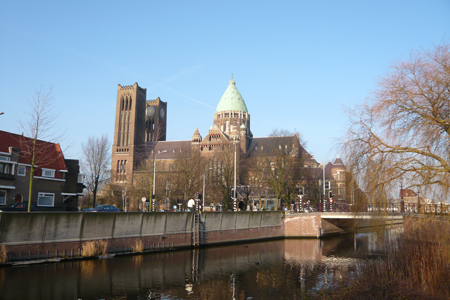 In 1893, under the leadership of Bishop Bottemanne, the decision to build the new cathedral was reached. In order to retain continuity with local history and popular devotion, the cathedral was also dedicated to Saint Bavo. From then on, in Haarlem there were two churches dedicated to this saint: de Oude Bavo (the Old Saint Bavo), the Calvinist church, and de Nieuwe Sint Bavo (the New Saint Bavo), the cathedral by Joseph Cuypers.

Together with Monsignor Bottemanne and his most trusted assistant and future successor Monsignor Callier, Cuypers did what is now more and more difficult for contemporary architects: he joined tradition and modernity—the unchanging message of the Church and new building techniques.

Fortunately, many project drawings by Cuypers are now collected in the Netherlands Institute of Architecture in Rotterdam, and the building history of Saint Bavo Cathedral can be easily retraced. The symbolic and technical choices of the architect are evident from the numerous drawings.

Approaching the New Saint Bavo, one seems to be in front of a big Gothic cathedral and to meet the numerous anonymous people who built this sacred jewel of European architecture. In the numerous pictures taken between 1893 and 1930, we can still observe the faded faces of the craftsmen who built the cathedral. What a strange feeling: to admire the building yard of the majestic cathedral that seems to come from the Middle Ages, portrayed with such a modern technique.

Cuypers did not overlook anything; meticulous care is displayed in every detail. 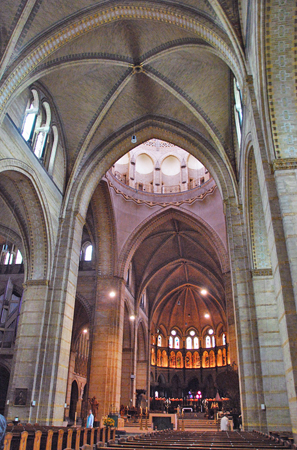 A view of the nave of de Nieuwe Sint Bavo. Photo: flickr.com/jimforest

Probably under the supervision of Monsignor Callier, Cuypers created the symbolic system of the cathedral: sixteen pillars specifically dedicated to the Apostles, the Evangelists, Saint Paul, and Saint Barnabas. The drawings by the architect assign every pillar a specific name. The eight pillars of the presbytery are symbols of the Cardinal and Theological Virtues (Caritas is repeated twice, meaning the love for both God and human kind). Each virtue is inscribed on its pillar both in Latin and by a symbol (e.g., Temperantia is represented by a camel, and Fortitudo by a lion, etc.).

Every structural element of the cathedral was built with yellow brick masonry, and decorated with yellow glazed tiles depicting roses in relief. These were designed by Cuypers as a symbol of the Holy Spirit descending on the faithful. They evoke a ceremony that is now rarely celebrated. During the Whit Sunday liturgy, roses and cotton balls on fire are dropped from the gallery in the main nave. For this reason, Pentecost is also called Pasqua Rosata, “Rose Easter.” During this ceremony, the hymn Veni Creator was sung, the first lines of which are written in the apse of the church, surrounding the bishop’s altar. The New Saint Bavo was designed with two altars: one facing East, the so-called “bishop’s altar,” and one facing the faithful, the “people’s altar.”

The presbytery area is rich with symbols. Every capital of the twelve columns in the choir gallery is sculpted with a different kind of tree or fruit, to represent trees in the Garden of Eden. The bases of the columns feature horrific animals, representing sins against God.

The big, conic dome, copper-coated and about sixty meters high, is visible from kilometers away. Seen from the nave, the dome reveals itself as a book transformed into architecture. Not just a simple book at that, but the last book of the New Testament: Revelation. Each symbol is sculpted in the material that the dome is made of. 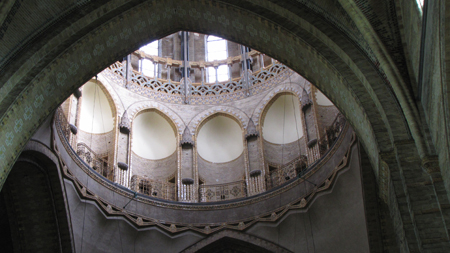 Unfortunately, visitors cannot see from the nave the extreme care Cuypers used in planning out the dome. It has not been designed to be seen just from below, by the faithful. Every architectural detail and decoration in glazed tiles is equally accurate in the external areas that are invisible from the nave, and therefore seen only by God, who looks on the cathedral from the sky. The dome—also from the structural point of view—is the Heavenly Jerusalem, as described in the Revelation. The “four living creatures” (Rev. 4:6–7) are the pillars that support the dome, each one dedicated to one of the Evangelists. Moreover, there are the “twenty-four other thrones on which twenty-four elders sat” (Rev. 4:4), represented by as many stylized faces at the base of the drum. They are surmounted by twelve arches: the “twelve gates where twelve angels were stationed” (Rev. 21:12). Angels statues have never been created, but their bases are evident.

Originally, in the pavement of the nave corresponding to the dome, the zodiac symbols were represented. This place is, in fact, a little piece of sky, because it is near the altar. The place where the Heavenly Jerusalem comes down from the sky is seen from above, so the zodiac was put in the floor. God the Father, from His throne, looks at the sky (represented by the zodiac) coming down on the earth, which is the place where His project of salvation has already begun in the sacrifice of His Son, renewed in the Eucharist celebrated on the altar.

Everything in Saint Bavo Cathedral has a specific symbolic meaning, which makes every element—following the example of other majestic cathedrals—a catechism for the faithful. 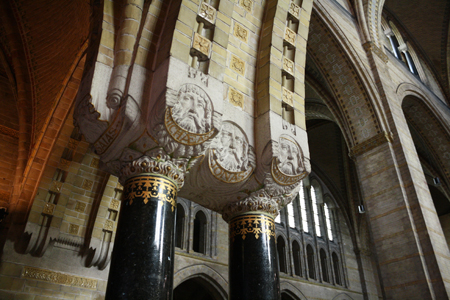 A questionable liturgical restoration—completed at the end of the twentieth century—resulted in the demolition of the zodiac symbols on the floor and the creation of a modern altar and a new ambo in the presbytery. In spite of this, the cathedral preserved all its symbolic and theological meanings. We hope all these changes to the presbytery area will be soon repaired, not in order to bring the building back to its first condition, but to recreate the message that using symbols brings the faithful close to God. 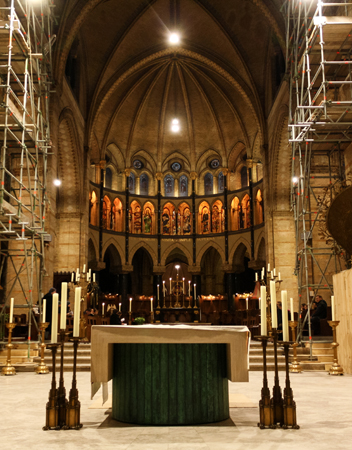 View of the sanctuary and modern altar that was added in the late twentieth century to Saint Bavo Cathedral. Photo: Jason John Paul Haskins

Even if he used a less innovative architectural and artistic language compared to that found in Gaudi’s famous Sagrada Família, Cuypers made the Saint Bavo Cathedral exactly how Monsignor Bottemanne wanted it for his diocese. He wrote his purpose in his own episcopal crest: Sicut Sponsa Ornata, “as a bride adorned for her husband” (Rev. 21: 2). Here every stone predicts His imminent return to meet His bride.

Laura Bolondi was born in Reggio Emilia, Italy, in 1980. She has a degree in Architecture (Politecnico di Milano, 2005), a PhD in Technology and Management of Cultural Heritage (IMT Lucca, 2009) and a Master in Architecture, Sacred Art and Liturgy (Università Europea di Roma, 2010). Formerly post-doc researcher at TU Delft (the Netherlands, 2010-2012), she is co-founder of EcclesiaStudio Design for Sacred Architecture. www.ecclesiastudio.eu»