by Christopher Burgwald, appearing in Volume 18

In Fyodor Dostoyevsky’s novel the Idiot, protagonist Prince Myshkin states, “I believe the world will be saved by beauty.” In the Beauty of Faith, Jem Sullivan makes a similar proposal, arguing that it is imperative that we employ the beauty of Christian art to spread the good news of Jesus Christ and his Church.

Sullivan begins by reminding the reader of the true nature of Christian art: historically, it was not created to be displayed in museums, but rather to serve a concrete catechetical purpose in a liturgical context. Christian art was created not merely to be admired, but even more to evangelize and catechize according to what Sullivan describes as “an intuitive and holistic pedagogy” in which the entire person is engaged. 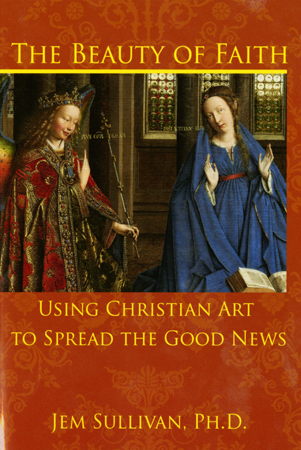 One would think that a culture like ours—so heavily dominated by the visual and the sensory—would embrace such an approach. As Sullivan notes in the first chapter, however, this is curiously not the case. While the larger culture is saturated and inundated by the sensory, Catholic modes of evangelization and catechesis are deficient in their employment of Christian art to spread the Gospel. Sullivan aptly describes this as a “sensory dissonance” in which there is an inverse relationship between how popular culture employs the sensory and the visual in contrast to how Catholic evangelization and catechesis employ Christian art.

Sullivan addresses this problem in two ways: first, by proposing an adaptation of lectio divina to facilitate more profound and prayerful encounters with Christian art, and second by noting the theological, anthropological, cultural and historical bases for employing Christian art as a visual Gospel to evangelize and catechize in our day and age.

To examine her points in reverse order, Sullivan treats the evangelical nature of beauty in chapters three, four and five. She notes that the theological basis for Christian art is grounded in the central truths of our faith: the Trinity and the Incarnation. Sullivan demonstrates how the reality of the Incarnation—the invisible God made visible—both allows for and in fact demands a visual and sensory portrayal of the truths of the faith. Particularly fascinating is her discussion of Christian art as what John Paul II called a “pre-sacrament” that prepares and enables the faithful to participate more fully in the Church’s liturgies.

Sullivan also explains how Christian art corresponds to the nature of the human person. Drawing upon a diverse company such as St. Augustine, Ecumenical Patriarch Bartholomew I, poet Dana Goia, Pope Benedict and others, Sullivan convincingly demonstrates the degree to which Christian art and the contemplation thereof deeply penetrates the human heart and corresponds to its needs and desires.

In the light of history, Sullivan makes the point that, as Catholics, we have a vast heritage to draw upon, and that in the past Christian art has demonstrated a profound ability to evangelize and catechize. With regard to culture, Sullivan develops her prior point on the degree to which our culture is visual and sensory, arguing that an effective evangelization and catechesis demands that we employ Christian art as a visual Gospel.

The most compelling aspect of Sullivan’s work, however, is her proposal to adapt lectio divina for the purposes of Christian art. In the second chapter of the book she first explains what lectio divina is: a prayerful engagement with Sacred Scripture, characterized by the four stages of reading, meditation, prayer and contemplation. Sullivan’s explanation and summary of lectio divina is itself fascinating, but what is even more compelling is her proposal for adapting that method to more deeply engage Christian art. Sullivan proposes that we appropriate the method of lectio divina to more fruitfully engage Christian art in order to achieve the end for which it was created: to lead us to greater union with God.

In her adaptation, we begin by examining a piece of Christian art at the basic level: what it depicts, what the style employed reveals, and so on; in effect, we “read” the piece (lectio). Then, together with a reading of the relevant Scripture passage, we move from the “what” of the piece to the “why,” pondering the deeper theological significance of the work (meditatio). This pondering then raises our minds to God and worship of Him, particularly in the theme of the piece (oratio), before bringing us to a resting in the mysteries which the piece portrays (contemplatio).

While the first step of this method —the reading of a piece of Christian art—will require significant work since most Catholics are illiterate about basic religious symbolism, this method does have considerable potential for achieving the important end which Sullivan sets out to address in her book: to rediscover Christian art as a visual Gospel in our time. May her book find a broad reading.

Chris Burgwald PhD is the Director of Evangelization and Catechesis for the Catholic Diocese of Sioux Falls in South Dakota. He earned his doctorate in Dogmatic Theology at the Pontifical University of St. Thomas Aquinas in Rome. Email: chris.burgwald@gmail.com