Microphones and the Homogenization of Liturgy

by William Mahrt, appearing in Volume 24

Space is not homogeneous. Thus Mircea Eliade begins his classic discussion of sacred space. Sacred space is structured and differentiated and thus represents order and purpose; in this, it is distinguished from profane space, which is unstructured and represents chaos.1 There are practical ramifications of such an insight. The spaces of a church are differentiated—each serves a particular purpose. The liturgy uses these spaces for its own purposes; indeed, the variety of spaces in a church results from their use in the liturgy. Acoustics are an important part of sacred spaces; and of course for sacred music, for the singing of the liturgy. But the acoustics of our churches have been significantly impacted by the overuse of the microphone.

Prof. Kevin White, in a thoughtful essay in First Things,2 complains about the effect of the microphone upon the liturgy: it irons out differences in style between the parts of the service and between the voices of the participants; it obscures the focus upon the altar and the focus of the address of the priest to God; and it brings to the liturgy a consistently loud sound like that of political rallies, sports events, airports, or other undistinguished hubs of secular activities. All of this is antithetical to the recollection and quiet expectation of the liturgy; the microphone is thus an extraordinary imposition upon it. 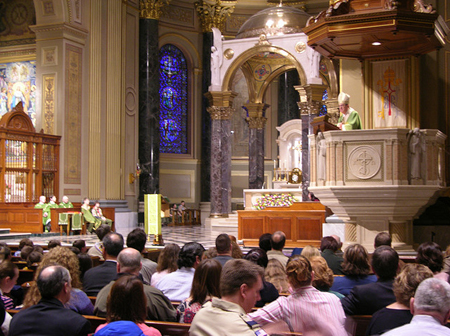 Prof. White is following up on an article by Marshall McLuhan, “Liturgy and the Microphone.”3 McLuhan had famously addressed the revolution created by the invention of printing, particularly in a book entitled The Gutenberg Galaxy.4 By substantially increasing access to the visual medium of printing, not only was the propagation of ideas accelerated but “intense individualism and intense nationalism” were cultivated.5 This had a major impact upon the liturgy: in countries whose language was not Latin-based, the demand for the vernacular replaced the use of Latin, and an emphasis upon preaching increased.

McLuhan also pointed out another similar quite recent revolution: the microphone substantially increased access to the acoustic medium. Large crowds could be addressed without recourse to “vehement exhortation.”6 The impact upon the liturgy was also major: a congregation could be addressed in an intimate and conversational way; the priest turned around to face the people; and Latin was abandoned for the vernacular. That the microphone allowed an intimate and conversational tone, even in large congregations, had an undesired side-effect: the elevated style suitable to a sacred rite was also abandoned, and the tone became chatty. This ambiguity of style, together with the stance facing the people, led to an ambiguity of address: clearly such talk was addressed to the congregation, but the principal object of address in the liturgy is God. Traditionally, this kind of address had been distinguished from other speech by a kind of sacred rhetoric, a liturgical style that made it unmistakable that this was not an everyday conversation.

Few realize the acoustic significance of the innovation. Previously the priest led the liturgy and he was heard to do so from the altar. The microphone, however, propagated his speech from loudspeakers on the periphery of the building, and so it was not acoustically evident where the speech came from. There is now a less clear acoustical distinction between priest and congregation, since his voice comes from the space occupied by the congregation: “Without a microphone, the speaker is at a single center, while with the microphone he is everywhere simultaneously.”7 The center is everywhere, the margins nowhere.

McLuhan’s observations suggest further reflection. The liturgy is hi-erarchical with the priest leading; lectors, acolytes, choir, and congregation in roles; each with its particular place in the hierarchy. This is important because such a hierarchy does not stop with the priest. Rather, since he addresses God, the priest stands at the head of the hierarchy. The hierarchical nature of the liturgy is a path to God, on which, tradition teaches, the Angels are singing along, enhancing the hierarchy as well. The priest’s part is heard from the focal point of the architecture, the altar. This enhances another aspect of the hierarchy: the priest’s role is clarified spatially, but also the several parts of the liturgy which take place at different points in the architecture, including the chair, the ambo (or the ambos on epistle and gospel side), the place of the choir, etc. It is important that these spatial distinctions can be heard. Broadcasting everything through microphone and loudspeakers homogenizes the distinction of roles and obscures the object of the hierarchical focus, which is the address of God. It “obsolesces” the architecture, according to McLuhan.8 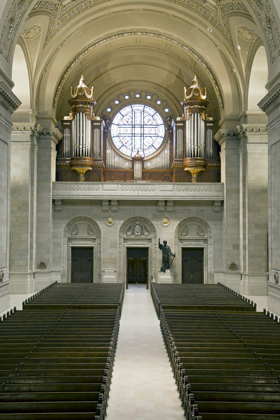 The location of the choir and organ in the loft at the rear of the nave improves the amplification at the cathedral in Saint Paul, Minnesota. Photo: Liam Flahive

There is an alternative to the microphone, and it is a traditional one: when the Mass is sung, there is no need for a microphone. Traditionally, singing was the principal way of projecting a liturgical text, and this was epitomized by the high Mass—the Mass in which all the parts to be pronounced out loud were sung. The singing of the Mass is actually a hedge against the abuses White recounts. It projects a sacred text throughout a large church in an elevated style suitable to the sacred without a microphone. With a microphone, the priest slips into the rhetoric of the talking heads of television; the lector abandons the chanting of the lesson; and the style falls into the chatty, which does not suit the sacred.

White complains that over the microphone the purposeful distinction in style between the various texts of the Mass is homogenized. But in the sung Mass, these distinctions are highlighted by the various melodies to which they are sung. Even the lessons receive a definite differentiation of tone: the Old Testament receiving a slightly harsh declamatory tone, the Epistle a highly rhetorical one, and the Gospel a simple but elevated one. Each of the various parts of the Mass receives a melody which characterizes its unique function within the whole, purposefully distinguishing it from the others in a way which makes the whole liturgy shine forth as beautiful—not art for art’s sake, but art in the service of the liturgy. In this kind of high Mass, congregations can participate in singing, especially the Ordinary of the Mass, but they can also experience the purposeful recollection elicited by parts sung by the choir or cantor. This is a higher kind of active participation, one described by Pope John Paul II:

Active participation certainly means that, in gesture, word, song and service, all the members of the community take part in an act of worship, which is anything but inert or passive. Yet active participation does not preclude the active passivity of silence, stillness and listening: indeed, it demands it. Worshippers are not passive, for instance, when listening to the readings or the homily, or following the prayers of the celebrant, and the chants and music of the liturgy. These are experiences of silence and stillness, but they are in their own way profoundly active. In a culture which neither favors nor fosters meditative quiet, the art of interior listening is learned only with difficulty. Here we see how the liturgy, though it must always be properly inculturated, must also be counter-cultural.9

The singing of the Mass parts by the celebrant sets his role apart from the others, but also integrates the liturgy and draws the other musical elements into the whole. Indeed, the American bishops’ recent document Sing to the Lord makes a strong exhortation for the priest to sing his parts. Moreover, when he does so, it is unambiguous that he is doing something quite distinct from the hubbub of microphone-magnified secular activity. Not only is it distinct but it is elevated, suited to addressing the most high God. It is set apart from the secular—it is sacred. It conveys the sacredness of the liturgy, something we are just now beginning to recover with the new translations, with the movement for the singing of the propers of the Mass, and with the singing of the priest. 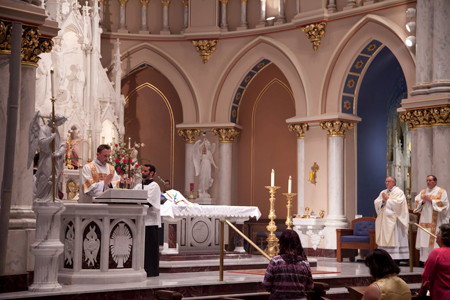 What I have proposed is an ideal, a paradigm. In the real world, compromises are sometimes necessary. Thus, even though the whole Mass be sung, the homily may need the microphone. Even though the lesson be sung, if it is not heard clearly, perhaps a microphone is necessary. This necessity stems mainly from the fact that our churches are consistently the subject of acoustical dampening. This is, however, not always the case, nor need it be. In the building of the new cathedral in Oakland, the acoustical consultant advised that acoustically dampening materials be installed and then microphones be used for practically everything. The response of the cathedral staff was no! We want this to be a place that is ideal for music. It is now a very live building. This history should be repeated again in the future. Several years ago, my choir made a trip to Prague. We sang a Mass in a different church each day for ten days, mostly singing complete polyphonic Masses. We sang in some very large churches, and I was quite apprehensive that the sound of our little choir would be lost in such large rooms. But every last one supported the singing remarkably. They had never been subjected to acoustical treatment and so our sound carried throughout the church.

William Mahrt is Associate Professor of Music at Stanford University, specializing in Medieval and Renaissance music. He is President of the Church Music Association of America and editor of its journal Sacred Music, and he conducts a chant choir which sings Gregorian Mass and Vespers with classical polyphony every Sunday.