A Mandate of Vatican II

Bishops should have a special concern for artists, to imbue them with the spirit of sacred art and of the sacred liturgy. This they may do in person or through suitable priests who are gifted with a knowledge and love of art.

It is also desirable that schools or academies of sacred art be founded in those parts of the world where they would be useful, so that artists may be trained. 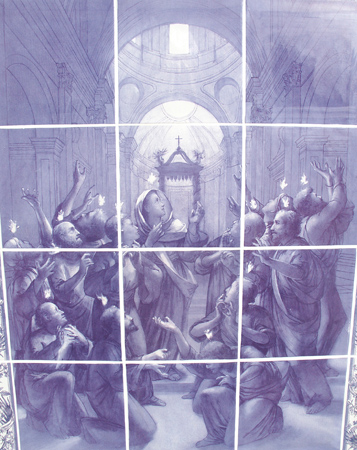 Anthony Visco's Descent of the Holy Spirit at the Rosary Walk at the Shrine of Our Lady of Guadalupe in La Crosse, Wisconsin. Photo: Duncan Stroik

One of the most important teachings of the Fathers of the Second Vatican Council was the provision for the establishment of schools or academies of sacred art in order to train artists. To the best of my knowledge, this responsibility entrusted to local Episcopal conferences has not been implemented. Not only does the council specifically mention artists; it specifically entrusts the responsibility of ensuring the quality of their work to the concern of the Bishop and appropriately trained priests to help in this endeavor. My questions are simply these:

It confounds me that our own Catholic clergy persist in absolute decision-making authority when it comes to the execution and implementation of new liturgical spaces or the commissioning of sacred art. Most clergy with which I am familiar do not know the difference between Baroque and Bauhaus but they insist on making the decisions about church design and architecture.

The Fathers of the Second Vatican Council did not intend for this to happen. When proclaiming an appreciation of art and artists the Council Fathers envisioned a partnership between the communities of Church and artisans. Such a relationship is to incorporate mutual understanding of the Church’s needs for artistic integrity and the implementation by the artisans of qualitative expressions of religious belief. Such an understanding does not imply that the most expensive representations of religious expression constitute the highest quality of the artistic endeavor; rather it suggests that the highest quality compositions by artists should be included in the Church’s expression of her beliefs. 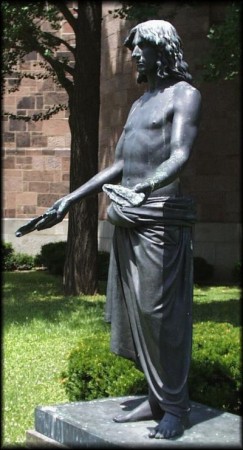 Jesus, the Bread of Life, by Walter Erlebacher, originally commissioned for the 41st International Eucharistic Congress at Philadelphia, 1976. The statue now stands in the gardens of the Cathedral of Ss. Peter and Paul, Philadelphia. Photo: Author

It seems that in neglecting the need to establish an American Academy for Sacred Art the symbiotic relationship between Church and Artisan is unimportant or unnecessary.

As the Catholic Church in the United States develops a richer understanding of its mission and sacramental activities it is time to implement the decrees of the Second Vatican Council and establish an institute for the study and preservation of sacred and liturgical art.

Most often, the major metropolitan areas of the country contain many of the individuals that possess artistic expertise and creativity. It makes logical sense then that most artists that specialize in liturgical and sacred arts would cluster around the larger Catholic populations in our larger dioceses and archdioceses. Sacrosanctum Concilium makes a very specific point that the Bishop should entrust the proper understanding of proper artistic and liturgical integrity to priests especially trained and associated with the visual arts. One step further would also to provide for the establishment of a liturgical arts organization within each bishop’s local jurisdiction. This group would serve as a conduit for local artists and parish communities that are seeking to utilize each artist’s and artisans’ unique skills and talents. At the same time, perhaps this same “liturgical arts” group could provide an educational element for priests and parishioners alike. Lectures, seminars and workshops as well as exhibitions of liturgical and sacred art might take place so all of the faithful would appreciate and understand the true importance and necessity of such contributors.

One of the only examples of such an exhibition of liturgical and sacred arts took place in Philadelphia in 1976 during the 41st International Eucharistic Congress, held in August of that year. The location was the old Philadelphia Civic Center and exhibition space provided to highlight local examples of sacred and liturgical art. It was also an opportunity for me as a high school student to begin to understand the truly symbiotic relationship that exists between the Church and the Artist, Sacred Art and Liturgical Expression, as well as the relationship between architecture and sacred space. During my tour of the exposition, I was introduced to many artists and craftsmen that continue to produce exceptional pieces of art that are most worthy additions to sacred spaces. Some of these artists, such as Robert McGovern, Bill Daley, Wayne Bates and Anthony Visco have been great sources of friendship as well as artistic mentors over the past 35 years or so. During my tenure as a seminary student, I was very fortunate to have experienced both artists and their works. In particular, Saint Charles Borromeo Seminary commissioned and still utilizes original furniture constructed by George Nakashima in the Sacred Liturgy. The liturgical furniture has for over 30 years provided exceptional examples of good design and exceptional execution of natural materials in the liturgical space.

Of course, one of the most enduring mandates of the implementation of Sacrosanctum Concilium was the entrusting of an educational understanding of the sacred and liturgical arts to the Bishop, who in turn delegated this task to Msgr. John Miller in Philadelphia. Throughout the years, Msgr. John Miller has taught many a future priest the qualitative differences between vellum and plain old paper, the nuances of quality between hand woven wool and mass produced polyester as well as the material exquisiteness of handcrafted liturgical vessels when compared to off the shelf items. Quite frequently his voice was similar to St. John the Baptist calling out in an artistic wilderness where the message of liturgical quality of materials was not always understood or appreciated. I am glad to say that after thirty years he is still teaching me and other former students about the necessity of highest quality materials in our oblations to the Almighty.

Clearly, the intentions of the Second Vatican Council regarding art and artistic expression within the Church is intended to launch a Renaissance of artistry in our contemporary Church. Unfortunately, in most cases this rebirth and new appreciation of artisans and their crafts is only realized on a limited basis. That is exactly why the United States Bishops need to establish an institute that promotes and fosters an appreciation of all of these artistic disciplines. Not only would such a school of sacred art provide much needed education for clergy and faithful alike, it would provide an creative incubator for ecclesial art. Artisans, clergy, faithful people would all have vast resources available to further appreciate and explore the relationship between the Church and Artistic expression. Such a relationship would provide opportunity for cooperation with all parties to explore artistic expression and its age-old relationship to the worship of God.

We are 40 plus years since the end of the Council and sacred art still does not have a domestic United States academy for its study and development. Since the close of Vatican II hundreds if not thousands of Catholic churches have been renovated, renewed, restored or even ruined by a disregard for their architectural and artistic integrity.

As a result, we have neglected as a Church to appreciate our own gifted Catholics that worship God through their artistic expressions. At the same time, the responsibility for creation of liturgical and sacred art consigned to companies that mass-produce religious articles for hundreds of Catholic Churches throughout the world. 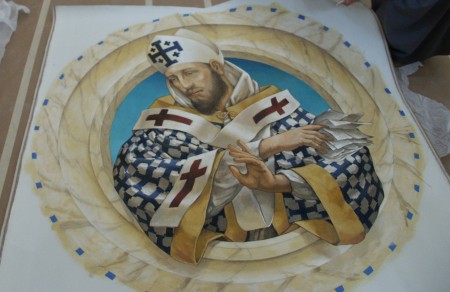 Pendentive canvas by Anthony Visco, depicting St. Cyril of Alexandria, Doctor of the Church, before its installation in the dome of the Shrine of Our Lady of Guadalupe, La Crosse, Wisconsin. Photo: Duncan Stroik

In addition to the initiation of a school for sacred arts, every parish community is best served by trying to incorporate local artists into all of their projects. It seems that the notion of community also involves appreciating the fields in which all of our parishioner’s labor.

Education of priests and faithful would not be a subject that is overlooked. Sacrosanctum Concilium also recommends that clergy and future clergy be educated in an appreciation of all of the arts. This is not something that the Fathers of the Council considered optional, it was part of the declarations of Sacrosanctum Concilium. It would also help a considerable bit if parish communities were involved in a catechesis regarding the importance of quality in our liturgical and sacred arts. Quite frequently, in our post-Industrial society that prides itself on the expediency of just about everything. It would be an enriching insight for parishioners to understand the difference between mass produced religious materials, and the essential quality and dignity of handcrafted articles destined for sacred expression. Rarely in our modern United States do we place a high regard on artistic craftsmanship that included material quality. This disregard for humanly created things quite honestly is reflective of the secular humanism dangers that present themselves to Catholicism. An individual’s essential value and worth at times are neglected for more collective goals and the dignity of a human person’s life and work sometimes disregarded.

In a time when more is best, biggest is better, most expensive is best and mechanical engineering is superlative perhaps we should pause and rethink our Catholic appreciation of human labor. Sacred Art in our liturgical activities is reflective of man’s deepest desire to pursue an understanding of God. Sacrosanctum Concilium implied there is an interconnected relationship between art and religion, the Church and the Artisan, and the Artisan with the Church community. It is an appropriate time in the 21st century to revisit the Church’s appreciation of artistic expression with a manner of material integrity. We have had enough of mass produced religious art, inferior representations of quality materials and the exclusion of Catholic artistic talents. It has been 44 years since the Holy Spirit through the Second Vatican Council inspired Sacrosanctum Concilium. It is time we implemented and paid attention to its significant message.

Hugh J. McNichol is a freelance Catholic author, businessman, and educator. He writes daily for the Catholic News Agency in his column, "Nothing Left Unsaid!" He received his education in philosophy and theology at the Saint Charles Borromeo Seminary in Philadelphia, and is an enthusiast of American Catholic culture and Philadelphia history.