Peter: The Foundation of the Church

by His Holiness Pope Benedict XVI, appearing in Volume 22

His Holiness Pope Benedict XVI gave the following homily at the Ordinary Public Consistory for the Creation of New Cardinals and for the Vote on Several Causes of Canonization, 19 February 2012.

On this solemnity of the Chair of Saint Peter, we have the joy of gathering around the altar of the Lord together with the new Cardinals whom yesterday I incorporated into the College of Cardinals. It is to them, first of all, that I offer my cordial greetings and I thank Cardinal Fernando Filoni for the gracious words he has addressed to me in the name of all. I extend my greetings to the other Cardinals and all the Bishops present, as well as to the distinguished authorities, ambassadors, priests, religious and all the faithful who have come from different parts of the world for this happy occasion, which is marked by a particular character of universality.

In the second reading that we have just heard, Saint Peter exhorts the “elders” of the Church to be zealous pastors, attentive to the flock of Christ (cf. 1 Pet 5:1-2). These words are addressed in the first instance to you, my dear venerable brothers, who have already shown great merit among the people of God through your wise and generous pastoral ministry in demanding dioceses, or through presiding over the Dicasteries of the Roman Curia, or in your service to the Church through study and teaching. The new dignity that has been conferred upon you is intended to show appreciation for the faithful labour you have carried out in the Lord’s vineyard, to honour the communities and nations from which you come and which you represent so worthily in the Church, to invest you with new and more important ecclesial responsibilities and finally to ask of you an additional readiness to be of service to Christ and to the entire Christian community. This readiness to serve the Gospel is firmly founded upon the certitude of faith. We know that God is faithful to his promises and we await in hope the fulfilment of these words of Saint Peter: “And when the chief shepherd is manifested you will obtain the unfading crown of glory” (1 Pet 5:4).

Today’s Gospel passage presents Peter, under divine inspiration, expressing his own firm faith in Jesus as the Son of God and the promised Messiah. In response to this transparent profession of faith, which Peter makes in the name of the other Apostles as well, Christ reveals to him the mission he intends to entrust to him, namely that of being the “rock”, the visible foundation on which the entire spiritual edifice of the Church is built (cf. Mt 16:16-19). This new name of “rock” is not a reference to Peter’s personal character, but can be understood only on the basis of a deeper aspect, a mystery: through the office that Jesus confers upon him, Simon Peter will become something that, in terms of “flesh and blood”, he is not. The exegete Joachim Jeremias has shown that in the background, the symbolic language of “holy rock” is present. In this regard, it is helpful to consider a rabbinic text which states: “The Lord said, ‘How can I create the world, when these godless men will rise up in revolt against me?’ But when God saw that Abraham was to be born, he said, ‘Look, I have found a rock on which I can build and establish the world.’ Therefore he called Abraham a rock.” The prophet Isaiah makes reference to this when he calls upon the people to “look to the rock from which you were hewn ... look to Abraham your father” (51:1-2). On account of his faith, Abraham, the father of believers, is seen as the rock that supports creation. Simon, the first to profess faith in Jesus as the Christ and the first witness of the resurrection, now, on the basis of his renewed faith, becomes the rock that is to prevail against the destructive forces of evil. 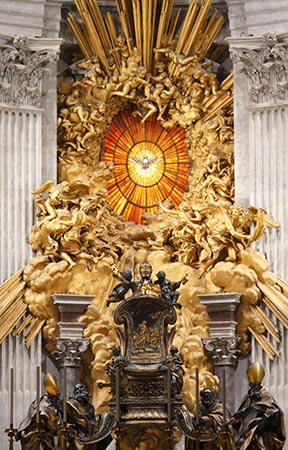 Dear brothers and sisters, this Gospel episode that has been proclaimed to us finds a further and more eloquent explanation in one of the most famous artistic treasures of this Vatican Basilica: the altar of the Chair. After passing through the magnificent central nave, and continuing past the transepts, the pilgrim arrives in the apse and sees before him an enormous bronze throne that seems to hover in mid air, but in reality is supported by the four statues of great Fathers of the Church from East and West. And above the throne, surrounded by triumphant angels suspended in the air, the glory of the Holy Spirit shines through the oval window. What does this sculptural composition say to us, this product of Bernini’s genius? It represents a vision of the essence of the Church and the place within the Church of the Petrine Magisterium.

The window of the apse opens the Church towards the outside, towards the whole of creation, while the image of the Holy Spirit in the form of a dove shows God as the source of light. But there is also another aspect to point out: the Church herself is like a window, the place where God draws near to us, where he comes towards our world. The Church does not exist for her own sake, she is not the point of arrival, but she has to point upwards, beyond herself, to the realms above. The Church is truly herself to the extent that she allows the Other, with a capital “O”, to shine through her – the One from whom she comes and to whom she leads. The Church is the place where God “reaches” us and where we “set off” towards him: she has the task of opening up, beyond itself, a world which tends to become enclosed within itself, the task of bringing to the world the light that comes from above, without which it would be uninhabitable.

The great bronze throne encloses a wooden chair from the ninth century, which was long thought to be Saint Peter’s own chair and was placed above this monumental altar because of its great symbolic value. It expresses the permanent presence of the Apostle in the Magisterium of his successors. Saint Peter’s chair, we could say, is the throne of truth which takes its origin from Christ’s commission after the confession at Caesarea Philippi. The magisterial chair also reminds us of the words spoken to Peter by the Lord during the Last Supper: “I have prayed for you that your faith may not fail; and when you have turned again, strengthen your brethren” (Lk 22:32).

The chair of Peter evokes another memory: the famous expression from Saint Ignatius of Antioch’s letter to the Romans, where he says of the Church of Rome that she “presides in charity” (Salutation, PG 5, 801). In truth, presiding in faith is inseparably linked to presiding in love. Faith without love would no longer be an authentic Christian faith. But the words of Saint Ignatius have another much more concrete implication: the word “charity”, in fact, was also used by the early Church to indicate the Eucharist. The Eucharist is the Sacramentum caritatis Christi, through which Christ continues to draw us all to himself, as he did when raised up on the Cross (cf. Jn 12:32). Therefore, to “preside in charity” is to draw men and women into a eucharistic embrace – the embrace of Christ – which surpasses every barrier and every division, creating communion from all manner of differences. The Petrine ministry is therefore a primacy of love in the eucharistic sense, that is to say solicitude for the universal communion of the Church in Christ. And the Eucharist is the shape and the measure of this communion, a guarantee that it will remain faithful to the criterion of the tradition of the faith.

The great Chair is supported by the Fathers of the Church. The two Eastern masters, Saint John Chrysostom and Saint Athanasius, together with the Latins, Saint Ambrose and Saint Augustine, represent the whole of the tradition, and hence the richness of expression of the true faith of the holy and one Church. This aspect of the altar teaches us that love rests upon faith. Love collapses if man no longer trusts in God and disobeys him. Everything in the Church rests upon faith: the sacraments, the liturgy, evangelization, charity. Likewise the law and the Church’s authority rest upon faith. The Church is not self-regulating, she does not determine her own structure but receives it from the word of God, to which she listens in faith as she seeks to understand it and to live it. Within the ecclesial community, the Fathers of the Church fulfill the function of guaranteeing fidelity to sacred Scripture. They ensure that the Church receives reliable and solid exegesis, capable of forming with the Chair of Peter a stable and consistent whole. The sacred Scriptures, authoritatively interpreted by the Magisterium in the light of the Fathers, shed light upon the Church’s journey through time, providing her with a stable foundation amid the vicissitudes of history.

After considering the various elements of the altar of the Chair, let us take a look at it in its entirety. We see that it is characterized by a twofold movement: ascending and descending. This is the reciprocity between faith and love. The Chair is placed in a prominent position in this place, because this is where Saint Peter’s tomb is located, but this too tends towards the love of God. Indeed, faith is oriented towards love. A selfish faith would be an unreal faith. Whoever believes in Jesus Christ and enters into the dynamic of love that finds its source in the Eucharist, discovers true joy and becomes capable in turn of living according to the logic this gift. True faith is illumined by love and leads towards love, leads on high, just as the altar of the Chair points upwards towards the luminous window, the glory of the Holy Spirit, which constitutes the true focus for the pilgrim’s gaze as he crosses the threshold of the Vatican Basilica. That window is given great prominence by the triumphant angels and the great golden rays, with a sense of overflowing fullness that expresses the richness of communion with God. God is not isolation, but glorious and joyful love, spreading outwards and radiant with light.

Dear brothers and sisters, the gift of this love has been entrusted to us, to every Christian. It is a gift to be passed on to others, through the witness of our lives. This is your task in particular, dear brother Cardinals: to bear witness to the joy of Christ’s love. We now entrust your ecclesial service to the Virgin Mary, who was present among the apostolic community as they gathered in prayer, waiting for the Holy Spirit (cf. Acts 1:14). May she, Mother of the Incarnate Word, protect the Church’s path, support the work of the pastors by her intercession and take under her mantle the entire College of Cardinals. Amen!

By His Holiness Pope Benedict XVI