Not Just Another Concrete Block

Founded in 1870, St. Ignatius College Prep is a coeducational high school southwest of Chicago’s downtown. Until recently it was surrounded by public housing. When I became president of the school in 1981, it was bankrupt: it owed $1,750,000 to the banks, and its net worth was then only $1,100,000. The banks would not pull the loans, however, because the buildings were so old and in such bad shape, and their proximity to the projects meant that their sale was unlikely to be profitable. Moreover, it is likely that closing the oldest Catholic school in the city would have caused more problems for the banks than it was worth.

In 1981 the school was in its original buildings, which dated from 1869 and 1872, and what was called the “New Wing,” which was built in 1895. The school had deferred maintenance because of giving so much of its funds away each year as financial aid. St. Ignatius has always had a mix of students from blue-collar families, youngsters whose parents were on welfare, as well as the children of police, firemen, teachers, white-collar workers, and some executives and professionals. Financial aid was therefore always needed, so that families of various backgrounds would feel welcomed. 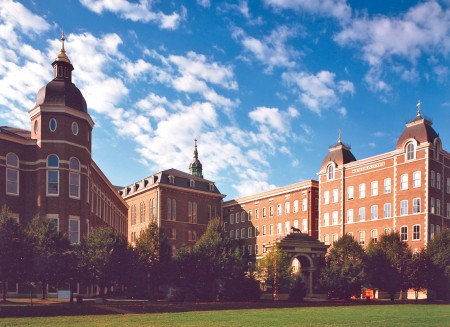 The restored St. Ignatius College Preparatory School has won awards for its restoration and addition executed in a similar style. Photo: Author

The school did not appeal to others to shoulder all that financial aid, and instead it just “went without.” As a result, the buildings had changed little over time, with the exception of makeshift modifications. For instance, the electrical wiring, installed by a Jesuit seminarian in 1902, ran in wooded troughs along the top of the walls, with a hole drilled through the wall to bring it into the classrooms. This setup was clearly far from ideal: wooden conduit with wiring like extension cords wrapped in a threadlike sheathing in wood-structured buildings!

The buildings had survived the Great Chicago Fire of 1871, which had burned to within a block of the school. The infamous Mrs. O’Leary was a member of the parish of the neighboring church, Holy Family, where her children were baptized. But by 1981, in addition to the school’s financial problems, the systems in the building were giving out, kept running thanks only to the skill of a wonder-working maintenance man. If we wanted to keep the school open for its 1,250 students, we had to raise “big money.” At that time, the annual fundraising amounted to about $50,000.

The first issue was to assess the physical stability of the structures. This did not constitute a problem. The foundations were seven feet thick; the walls were thirty-eight inches thick. The school’s French-Canadian architect/ builder had not been too sure how strong a one hundred and twenty-four foot building needed to be. When in doubt, he made it thicker. The floors were supported by four by fourteen inch beams set every twelve inches.

The big decision was whether we should restore the building, that is, ask benefactors to donate money to return it to its original condition (which would take a good bit of figuring out) or whether we should merely repair it in the cheapest possible way. In the winter, snow would come through the original windows, which ranged from twelve to thirty-two feet in height. Some suggested that we buy Sears doubleglazed home windows and fill in around them with bricks. Others thought we could save money by running new electrical conduit on top of the plaster instead of burying it.

St. Ignatius is one of the five public pre–Great Fire buildings extant in Chicago. Its style is a Chicago frontier-town version of Second Empire, which was popular in 1870. Fr. Damen, the Belgian immigrant Jesuit priest who founded the parish and school and had both buildings built, wanted them to look like buildings he knew at home. This historical background influenced our commitment to preserve the integrity of the original buildings. Regardless of albeit firstclass curriculums—the teaching of Shakespeare and the classics or up-to-date science—most schools are today housed in structures that lack outstanding aesthetic appeal. Newer ones tend to be boxes of cement block with vinyl tiling running in a seemingly endless procession through their halls and classrooms. By contrast, we had a distinguished building. I therefore represented to the trustees that we take the time to restore it authentically to its original designs and ask our donors to do something really fine for our students and for the city of Chicago.

We contracted experts to wire brush through layers of paint on the ceilings of the various rooms in which we suspected there had once been old stencils. We copied the designs of the remaining wooden doors in the school; fire doors were clad so that the building would be safe and yet retain its architectural authenticity. Our nearly five hundred original windows were reproduced exactly.

We were able to consult with some enormously knowledgeable people about the detailing. The architectural firm of Solomon Cordwell Buenz had never done a restoration of this kind before. I drew sketches and showed them pictures of what 1870s detailing looked like, and we worked through the building with them step by step. The process was mutually rewarding, and as a result the firm became conversant in a nineteenth-century architectural vocabulary that they had hitherto never had occasion to use.

While there was doubt in the beginning that we could raise the money, perseverance and a good cause helped enormously. People were far more attracted to helping to restore something beautiful than to helping us to build a two-story cementblock replacement, as some had recommended. We found old photos of the gas fixtures and had them remade and electrified. We found old bits of carpet in the attic and had it made as carpet in the main areas. In order to get it “right,” wherever we needed designs, we sought help from restoration experts like Robert Furhoff and Tim Samuelson in Chicago. This rigorous approach to the restoration cost more than the alternatives might have, but it left a legacy for the future and avoided the destruction of a building deemed fine enough to be on the National Register of Historic Places. In 1993 we received the National Achievement Award for our efforts from the National Trust. By 1995, the school’s one hundred and twenty-fifth anniversary and twelve years after we had begun the restoration, no mortar, no window, no bit of slate roofing, no plaster, no plumbing or wiring, no flooring or bit of paint and no furniture remained as it had been ten years before. 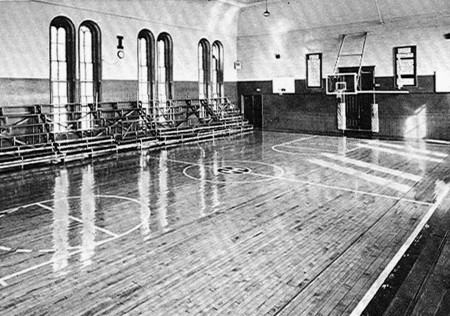 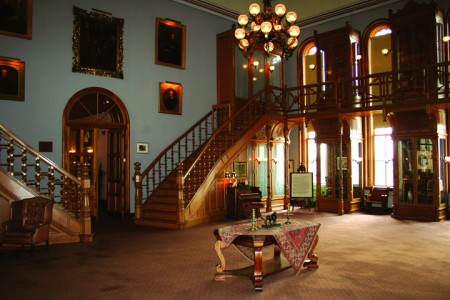 The former gymnasium has been converted into the grand library for the school. Photo: Author

While parents take their seventh and eighth graders to see a variety of high schools, they go home to memories of buildings that all look sort of the same— with the exception of St. Ignatius Prep. “It looks like a palace,” they say. The building has become a sign and symbol of the quality of the education the school offers, as its students are among the topscoring students in Illinois.

St. Ignatius is a welcoming place to various economic groups and racial minorities, and its buildings provide a visible sign that students are really going to a special school that will launch them into life as people of faith and responsible adults. Signs and symbols, crosses and statues, are everywhere in the school, and these, in synthesis with the school’s religious and pastoral programs, offer a counterpoint to the secular world in which these boys and girls are growing up.

The three old buildings, about one hundred and forty thousand square feet of space, cost about twenty million dollars to restore. It took us about ten years to raise that much money. Phasing the construction worked out well because we used the whole building for classes forty-two weeks of the year—and then raced to get work done in the ten weeks of summer. Having completed the restoration, we erected two new buildings, about eighty thousand square feet, costing about another twenty million dollars, adjacent to the historic buildings, so that we could have more room and better facilities.

Some had suggested that our new buildings should reflect a contemporary style. However, given the relatively small scale of the campus (twenty acres, much of it playing fields and parking), it seemed better to be responsive to the context of the older buildings and to have newly designed buildings in similar shapes and textures. The school had been surrounded by parking lots, but we were able to buy three acres a block away, following the closure of a local truck-repair company. That allowed us to move the parking there and to surround the school with a small botanic garden, as well as paths and benches for students, the whole surrounded by handsome wrought-iron fencing for security.

Raising this much money, plus building an endowment from $24,000 to $15,000,000, giving out great amounts of financial aid so that the school could always be welcoming to students of all backgrounds was a lot of work. During my presidency (1981– 1998), we raised $70,000,000. But it proved easier raising money to put up something beautiful with which the donor would be proud to be associated than to try to eke out money for a concrete-block structure. Donor plaques adorn just about everything, including each and every window, visible demonstrations of how the restored St. Ignatius is our ongoing gift to the students of the school and, more broadly, to the city of Chicago.