by Michael Patrick, appearing in Volume 29

At lectures and symposia about Catholic church design in the United States, a noticeable dissonance emerges regarding the elements that today’s architect may use to create sacred space. Some propose to use representational iconography, traditional form, and hierarchy as design elements. Others propose the sculpting of natural light and the abstract, nonrepresentational artistic composition of modern form as the basis of the design. Both enthusiastically embrace the same goal of creating meaningful religious space, but the latter are frustrated by the former’s clinging to outmoded ways of thinking.

There are many forms of beauty in the world, and a person of integrity may remain interested in the beauty and meaning inherent in multiple design sensibilities. The fact that both of these approaches has its own internal coherence does not, however, mean that there are not important differences between them and the supporting philosophies undergirding each. For the design of churches, these differences in approach are particularly poignant, as “religion” and “spirit” are realms in which philosophical ideas about the world and the person are decisive.

The Architect as Composer

Some feel that, in the design of churches, meaning-laden representational imagery and hierarchical space are unnecessary and, moreover, get in the way of more important goals. When presented with the opportunity to include representative imagery in a church, they will tend to work until the representational aspect of the image has been transformed into an abstraction.

The word “abstraction” is important, although it is a word that could fruitfully be discussed further than is possible here. When the word first appeared seven centuries ago, to abstract something was to “draw away” or “drag away, detach, pull away, divert,” and by the fifteenth century it included the meaning “withdrawn or separated from material objects or practical matters.”1 Interestingly, in the sixteenth century there was also introduced a sense of the word meaning “a smaller quantity containing the virtue or power of a greater.”2 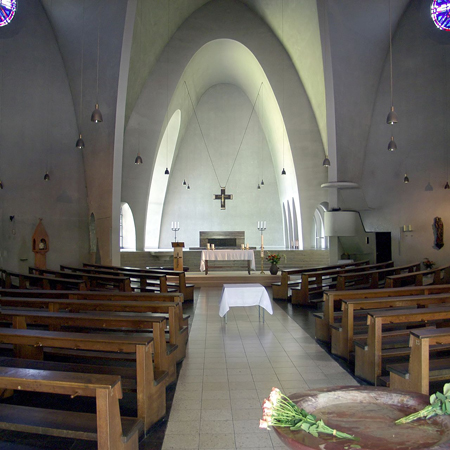 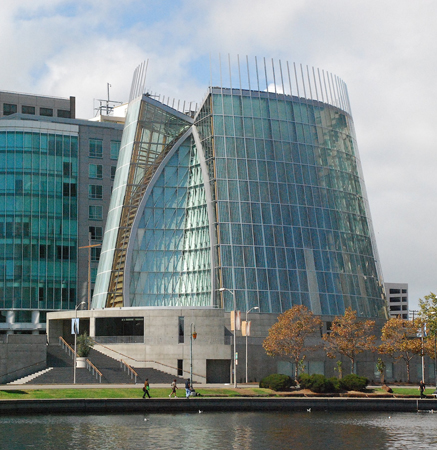 The Cathedral of Christ the Light in Oakland, California. Photo: flickr.com/CTG/SF

Whether it is the “pulling away” of something or the concentration of virtue and power in the most minimal expression possible, abstraction is essentially very different from representation. For this article, the main point is that abstraction in art and architecture tends to mean the absence of particular historical and personal references through representational artistic devices.

While granting the beauty possible in the above approach, representational imagery, hierarchy, and certain aspects of traditional form seem to be uniquely capable of bearing the specificity of historical and personal meaning that is essential to Catholicism and therefore to the design of a Catholic church building.

These elements can only be brought into our experience through the sophisticated use of natural light on many levels. However, light and artistic composition, in the design of a church, are better used to play a supporting and intertwining role with representational images and with forms that appear to have gravity and weight—not the lead role in which light appears as pure essence, in relation to abstract form that attempts to relieve itself of gravity and weight.

There is a parallel discussion, very much at play in the above world of church design, between Catholic theology and a spiritualism that has roots in the spirit/body dualism of Gnosticism. Stated too crudely, Gnosticism is an ancient conviction that there is a good force associated with the spirit or heaven and a bad force associated with the body or earth—and life is a battle for the freeing of the spirit from the bondage of the body. The article “The New Gnosticism” by Dr. Benjamin Wiker3 is an excellent exposition of how this way of thinking has experienced a resurgence in modern times and is essential to many aspects of our modern culture.

Catholicism, however, has always asserted that this is a false understanding of the state of things—that evil is not equal and opposite to good, but rather the absence of goodness. Similarly, Catholicism has always rejected the idea that life is about the victory of the soul over the body in a way that destroys or discards the latter. Victory is sought after and claimed, but it is the victory of education and order, not of destruction and elimination. And it leaves soul and body bound together and stronger for it.

Because body, earth, and groundedness matter so much in this view of the world, representational arts that express particular and personal stories of real lives are essential to the creation of Catholic religious space. 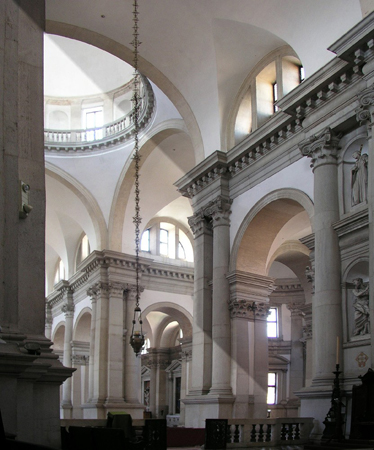 Mystical light is used in support of a vision of religious space that is simultaneously human and divine. It celebrates the embodied nature of ourselves and our God (via Jesus Christ), on the one hand, and the gift of soul and intellect that allows us to grasp the transcendent truths of God and Creation, on the other. These are mysteries of the Catholic faith, and light plays a role in the engagement of this mystical experience in a mutual revealing that educates the complete person. The following observations help to illustrate this:

1. The mind is educated by images, words, hierarchy, order, design, and movement. It is educated by specific, concrete connections to others and to the past. Natural light is here used to bring to life images of historic and personal significance, to dance within the layers of architectural orders that resonate with us in proportion and scale, to pick out the most significant texts in letters larger than life in order to fill the soul with truth and goodness, to orient us to what is most important, and to draw us to it.

2. Natural light reveals shapes and colors, delights the eye in a play of highlight and shadow across articulated surfaces, and marks time as it enters shaped windows and arches with gently changing angles of repose. The body’s engagement with the concreteness of the religious world is made stronger through natural light.

3. Etsuro Sotoo, the Japanese master of the stone works at the Basilica of the Sagrada Família in Barcelona, has said that it is he who is educated by the stone in how to carve it—not the other way around, as if he could somehow tell the stone how to behave. In a Catholic understanding, our minds do not overbear our bodies or lead them with absolute authority. Instead, our bodies themselves teach us a great deal and reveal to us something important about who we are. Similarly, material and form in return reveal the presence of light and give it shape. Without the bodily and the material, light and the spirit are nothing to our senses.

These are natural observations related to religious conceptions that are intrinsic to Catholicism, which is fundamentally about the Incarnation—that is, about embodied spirit in the Person of Christ. They engage the whole person: flesh, intellect, spirit, and emotion. They are historical, of a particular time and relating to specific events of the past.

In the aforementioned ways, composition is used as a means to allow deeper engagement with a specific historical narrative. This narrative is essential to Catholicism, even when it is dense, self-conflicting, and imperfect, like the people who engage in it. Composition here is illustrated and enlivened by natural light introduced with expertise. The architect uses natural light in conjunction with representational art and traditional form in a mutual act of revealing each in the presence of the other. These and their relation become the essential elements in the creation of religious space.

The composition achieved through this approach is open and allows augmentation. The strength of an organizing narrative allows other stories to be added over time, so that the building of the church is truly the work of generations, not the master stroke of a single genius frozen in time.

In this approach, means are directed toward their proper ends. The interplay of natural light, material form, and representational image is the means, which helps to bring about the religious experience as the end. 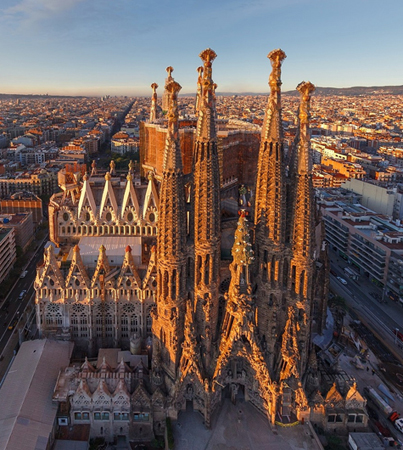 Mythic light is used to create spiritual space, with light composed and sculpted in relation to abstract form and material. It has these characteristics:

1. It is diffuse, preferring disconnection from the specificity of pressing realities and therefore denying intelligibility, as a matter of principal, in favor of ethereal otherworldliness.

2. It is preferential toward feeling and emotion for their own sake, driven by the will, ideally freed from constraint. It therefore tends toward the bodiless, denying the body in favor of an interior state of separation from—or control over—bodily experience.

These are concepts that relate well to certain non-Catholic spiritualities, yet fail to engage significant parts of Catholic religiosity.

Mythic light denies connection to any particular time. The destruction of a sense of one’s place in time and relation to other times allows only the compositional setting of the “now” to have meaning. The meaning of the space is entirely contained in the total artistic composition, with natural light as its summit and crown. Narrative and representational imagery are not allowed. The result is a closed statement allowing no augmentation. Any change to the space destroys the architect’s total artistic composition. Since the composition carries all the meaning, if the unique composition is modified, the meaning is destroyed. The means have been confused with the ends. 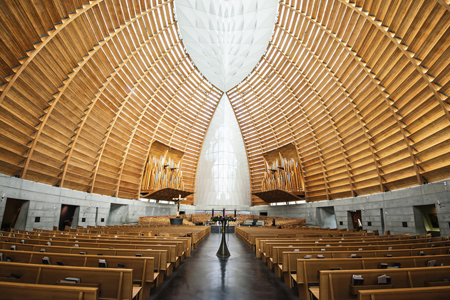 Interior of the Cathedral of Christ the Light, Oakland, California. Photo: flickr.com/Jim Watkins

Representational imagery, hierarchy, order, and form related to the human scale—all illuminated and enlivened by natural light in a mutual act of revelation—are required to tell the Christian narrative. Natural light and artistic composition in themselves, regardless of how masterfully they are composed, are not capable of carrying meaning in this way. The Christian narrative is required to allow the Christian to locate himself or herself in the context of the communion of saints, which is the Body of Christ unfolding in this space and time.

This is written with the hope that this approach may increasingly be employed in the design of new and renovated Catholic churches throughout North America. If these elements can continually find new expression in the extension and transformation of the tradition of sacred architecture, the architecture of the Church will be continually reborn without losing sight of its most important mission.