by Hendrik Dey, appearing in Volume 19 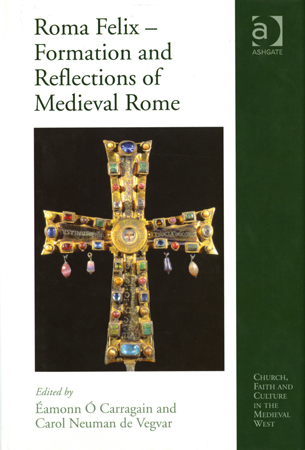 In their introduction, the editors succinctly state the case for the city of Rome’s striking preeminence in the collective cultural consciousness of western Christians during the Middle Ages, a manifestly important premise which has received less attention than might be expected in the over a century since the appearance of Arturo Graf’s monumental Roma nella memoria e nelle immaginazioni del medio evo. In fact, as Alan Thacker notes in his opening chapter on the development of martyr-cult in Rome in late antiquity and the early Middle Ages, the transition from Rome as caput mundi of a secular empire to Rome as caput ecclesiae of Latin Christendom was hardly the inevitable progression it appears to be in hindsight. The contributions to this volume, sprung of papers given at three separate conference-sessions on medieval Rome, might thus be supposed to illustrate diverse facets of the process whereby “Rome” became the archetypal Christian city and the spiritual epicenter of medieval Christendom, between the fourth and twelfth centuries.

The fourteen chapters of Roma Felix are grouped into two sections. The first, “Articulating the City: Communities, Congregations, Cults, and Processions,” encompasses developments within the city of Rome itself, while the second, “Reading the City: Envisioning, Interpreting, and Imitating Medieval Rome,” deals with responses to Rome across its extended spiritual hinterland, with particular emphasis on the British Isles (the subject of the final four chapters). Among the individual chapters, many penned by leading figures in their respective fields and executed to a generally high scholarly standard, several deal with matters architectural.

Caroline Goodson’s “Building for Bodies: The Architecture of Saint Veneration in Early Medieval Rome” (Chapter Two) covers much the same ground traversed by Alan Thacker’s contribution. Apart from an emphasis on features (annular crypts, fenestellae) designed to make the bodies of the martyrs more accessible to the faithful, there is little analysis of the evolution of the architecture of saintly veneration over time, either in terms of technical characteristics or in terms of the social, political, and theological considerations that underlay the choices made by builders and patrons between the fourth century and the ninth.

Such considerations, however, lie at the heart of C. Neuman de Vegvar’s intriguing chapter on “Gendered Spaces: The Placement of Imagery in Santa Maria Maggiore” (Chapter Four), in which the author makes a strong case that the Old-Testament mosaic cycle on the south wall of the nave featured more numerous and prominent depictions of women in part because these images would have been those visible to the female congregants, who stood along the north flank of the nave. Stephen Lucey takes a similar approach to the early-medieval frescoes at Santa Maria Antiqua in the Roman Forum, which he uses as a window onto the cultural and linguistic orientation of its patrons, and the divisions of class and gender that prevailed among the congregants in the church, who again seem to have been confronted by imagery targeted at their assigned stations (female saints along the west aisle, where women stood; portraits of lay patrons where nobles stood near the chancel screen). Like de Blaauw’s Cultus et Decor, such efforts to integrate sacred architecture with its social and liturgical context open up a world of intriguing interpretive avenues, among them the possibility of an “increasing emphasis on spectatorship in the experience of the laity during the early medieval Mass” (de Vegvar, 108).

Following John Osborne’s cautionary tale about the dubious value of “stylistic connoisseurship” as a means of dating medieval frescoes, and Martina Bagnoli’s analysis of the function of decorative motifs in the fresco-cycle in the crypt of the cathedral at Anagni, Dale Kinney provides a timely antidote to recent lit-crit-inspired interpretations of the Mirabilia urbis Romae, which she sees, like Lanciani and Duchesne before her, as firmly rooted in the topographical realia of the twelfth-century city. To my mind, further consideration of the intended audience of the document would have been useful. To what extent was the Mirabilia, and for that matter so many of the other topographical, architectural, iconographic, and liturgical developments at Rome presented in this volume, shaped in response to the expectations of the international public upon whose consent, and active engagement with the legacy of “Rome,” the city’s exalted status as caput ecclesiae so largely depended? The question remains open.

Hendrik Dey is Assistant Professor in the Department of Art at Hunter College, CUNY. He is the author of The Aurelian Wall and the Refashioning of Imperial Rome, A.D. 271-855, with Cambridge University Press.