by Steven Schloeder, appearing in Volume 24

The attempts over the past century to find a contemporary architecture that can bear the weight of the Church’s sacramental vision have largely been unconvincing. Yet we are immediately confronted with both the Church’s own statement that she adopts no particular artistic style as her own (the Church and the Gospel are rightly above any irrevocable association with any secular or culturally contingent forms), as well as the notion that somehow the Holy Spirit will guide the Church and her theologians, architects, and artists to find meaningful expressions of the timeless truths of the Faith in any era or social circumstance. While appreciating that the Church does indeed have a cultural memory, a traditio both in the apostolic sense and in the natural sense, the Church is not hide-bound to the accidents of the artistic traditions.

Given the difficulties in finding an appropriate modern language for church architecture, what can we positively propose as a direction for modern Catholic churches? Let us begin by recalling the guidelines given by the Vatican Fathers for the correct reformation of the liturgy: “In order that sound tradition be retained, and yet the way remain open to legitimate progress, a careful investigation—theological, historical, and pastoral—should always be made . . . and care must be taken that any new forms adopted should in some way grow organically from forms already existing.”1

Applied to ecclesial design, this passage certainly suggests that new churches be rooted to some degree in historical architectural precedent. Given the immense number of Catholic churches built over the centuries, one could hardly argue that this guideline would limit creativity. The Church also requests that “the general plan of the sacred building should be such that it reflects in some way the whole assembly.”2 That is, the spatial arrangements should express that the liturgy is “coherently and hierarchically ordered,” that the arrangement accommodates “the variety of ministries and the variety of actions according to the different parts of the celebration,” and that it both “allows the appropriate ordering of all the participants” and “facilitates each in the proper carrying out of his function.” The principle to be maintained is one of unity, expressive of the unity of the Body of Christ, while respecting that the body is comprised of different parts which have a hierarchical structure with a diversity of functions. The goal therefore is to create a church that expresses and manifests “a close and coherent unity that is clearly expressive of the unity of the entire holy people.”3 Only an arrangement derived from such an understanding can begin to address the iconographic concern of the building representing the Church as the Body of Christ and the People of God. 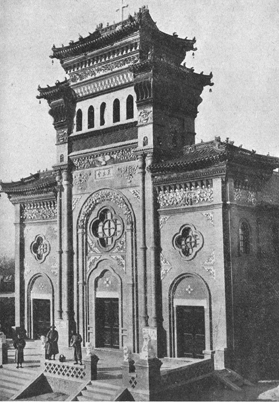 We can also examine afresh the structural metaphors for the Church, both biblical and traditional, to explore new and relevant ways of expressing the ancient images of the Faith. Images such as the Temple, “the holy mountain” of the Psalms, the heavenly Jerusalem of Revelation, the womb of the Virgin, the Upper Room, and the cruciform body of the Lord are but a few of the scriptural metaphors rich with meaning and architectural potential. Other recurring images show the Church as the ark of Noah or as a ship, an ancient image first invoked by Saint Peter (1 Pet 3:20), and thereafter by Justin Martyr, Cyprian, Augustine, Bede, both Hugh and Richard of St.-Victor, Antoninus, and Nicholas V. Only recently have we seen a recovery of these ideas, and notably the return to the basilican arrangement in lieu of the spate of theater-style seating that have been nearly universal since the 1960s. But this is not just a matter of furniture arrangement: the question still is a sacramental one — the church building as a sacred sign of the Ecclesia herself—and of how to approach church design in this sense.

The Church Universal and the Particular Churches

If we accept that the church building should be a sacred sign of the Ecclesia, what does this tell us about how to approach the design of a church? How do we account for a common way of thinking about church projects whether the building is a church or a cathedral or an abbey? Or whether it is for the Roman rite liturgy or the Syro-Malabar rite or the Maronites? Or whether it is being built in an arid country with mud bricks or in a cold and wet northern climate with steel frame construction, an insulated brick veneer, double glazed windows, and forced air ventilation? Can we speak of any commonality in thinking about the various styles and techniques of church buildings over the past two millennia such that we can understand the intrinsic connections between them as legitimate expressions of the Ecclesia and as truly sacramental architecture? Is it sufficient to build in the western European styles of architecture—classical, Romanesque, Gothic—even in missionary territories where these are alien forms? Should these particular styles be elevated to universal forms for Catholic architecture? 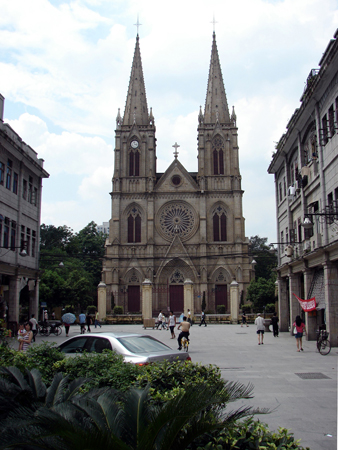 Clearly as we saw in Sacrosanctum concilium, no. 123, the Church is adverse to claiming any mere style of architecture as encompassing of her mission or liturgical vision. Architectural styles, even those that are claimed as perennial such as the Greco-Roman classical tradition that was adopted in the Constantinian era, resurrected in the Renaissance, and recently recovered by the “New Palladians,” are all historically and culturally contingent. Any style is a particular expression of the technology and technical abilities, aesthetic values, cultural norms, cosmological worldview, symbolic understanding, and deeply held values of an age. While it may be inarguable that the historical styles that constitute a significant body of the architectural patrimony and cultural memory of the Church have far more commonality and consonance with the deep traditions of the Catholic faith than architectural modernism does, it would be a mistake to assume that any previous style of architecture can be universalized for the Church’s mission.

The idea that western cultural norms should be the basis for the Church’s missionary activity has been implicitly rejected in the Church’s missiology, as evinced by the various papal documents of the mid-twentieth century. Benedict XV’s Maximum illud called for the missionary to leave behind the cultural norms of his native homeland, and rather to seek only the spiritual good of the people to bring them to “their homeland in heaven.” He noted that “the Catholic Church is not an intruder in any country; nor is she alien to any people.”4 His successor, Pius XI, cautioned against immediately building churches in missionary territory that were “too sumptuous and costly as if you were erecting cathedrals and episcopal palaces for future dioceses.” Rather, the Church should seek to grow organically among the people, and it was deemed vital to cultivate a local clergy to develop an indigenous Church that best could proclaim the gospel to the particularities of the native culture.5

Celso Cardinal Costantini, who was appointed by Benedict XV as Apostolic Delegate to China and later the Secretary for the Sacra Congregatio de Propaganda Fide, decried the imposition of western art forms in foreign lands and worked to promote authentic and distinctive Christian art forms that grew from the sensibilities of the native people who embraced the Faith. His goal was “to Christianize true indigenous art itself, that is, the natural productions of the genius of the various peoples.”6 He saw that “Western art in China is an error in style. It is an error to import European styles, Romanesque and Gothic, in China.” His concern was deeply evangelical; that “Western Christian art used in China gives the impression that Christianity is a western, not universal religion; the Church throughout its history has adopted and adapted to local art forms; Chinese art and culture provide many opportunities for adoption and adaptation.”7 Such adoption and adaptation was not limited to China, but promoted wherever the Church sought to proclaim the universal message of the gospel unfettered by the cultural constraints of the western architectural styles and artistic conventions. The particular Churches in India or Java or Japan could find a happy synthesis between the architectural patterns of their respective ritual and civic buildings (much as the early Church did with the Roman judicial basilica) and the universal elements that properly ought to govern the shape of the church: the liturgical, canonical, and theological principles of church building.8

This approach is instructive for us in considering the question of an appropriate architecture to serve and reflect both the Universal Church and the local particular Church. These terms of Catholic canon law can help us to appreciate the idea that a church building ought to serve iconically both the universal message of the Gospel and local presence of the Church in a particular region. By discriminating between the particular—e.g., the culturally, historically, site and project specific, and technologically contingent aspects of a church—and the universal (the sacramental signifiers, the liturgical arrangement, the canonical requirements, and the theological import) we can reconcile the vast array of Catholic churches built over the past two millennia, irrespective of the vast differences in era, rite, style, climate, technique, materials and methods, budget, local culture, or capabilities of the builders.

With this in mind we can suggest that any successful Catholic church building, as a “sacramental sign,” should simultaneously be an icon of the Universal Church and of the particular Church. It will be reflective of the Universal Church when it is properly informed by the Church’s sacramental tradition of building (the language of the Body, the Temple, the City, etc.), an authentic liturgical sensibility, due consideration of the Church’s canonical requirements for the church and the various parts therein, and respect for the iconographic conventions that inform good sacred art in service of the liturgy and the devotional lives of the faithful. As importantly, it will be reflective of the particular Church, the local Ecclesia and the specific parish community, when the design addresses the local and vernacular concerns of the project.

The myriad of issues such as site considerations, vernacular architecture, budgets, planning and zoning requirements, building code regulations, variable “tastes” of pastors and building committee members, what the parish community will support financially, and the artistic talent of the design team will all shape the final building significantly even if the “universal” aspects are all meticulously attended to. As we have noted previously, the most concise statement of the universal aspect—which informs the liturgical, canonical, and much of the historical architectural patrimony—is that the churches “should be truly worthy and beautiful and be signs and symbols of heavenly realities.”9 If the thoughts and aspiration of the architect and the parish client are such that the whole building, all the component parts that serve the liturgy, and both the ministerial priest and the baptismal priesthood of the lay faithful should be truly turned versus Deum per Jesus Christum, then the building might well hold its place in the continuum of good sacred architecture as an icon of the Universal Church manifested in the local Church. For this is what we are always about in church design: manifesting the Heavenly City, the Church Universal, here in our own home town.

Steven Schloeder, Ph.D., AIA, specializes in Catholic church architecture in projects across the country. He is preparing a revised and expanded edition of his Architecture in Communion (Ignatius Press, 1998). His work and writings can be seen at www.liturgicalenvirons.com.