A Short History of Reservation of the Eucharist

For the purpose of trying to discern major shifts in the theory and practice of the reservation of the Blessed Sacrament, the history of the tabernacle can be divided into four sections: the patristic period until Carolingian times, the Carolingian period until the Council of Trent, the Council of Trent to Vatican II, and Vatican II to the present.

The Patristic Period until Carolingian Times1

From the ninth century onward, the reservation of the Blessed Sacrament in the church becomes the norm, while the practice of keeping the Eucharist in the homes of the faithful disappears. This is a one of those fundamental shifts which merits greater attention. Giambattista Rapisarda offers three reasons for such a significant change in Eucharistic practice: 1) the rise of major Eucharistic controversies about the nature of Christ’s presence, starting with Paschasius Radbertus (+859) and Ratramnus (+868); 2) the spread of a different spirituality reflected in the new genre of apologetic prayers which manifested enormous respect for the Eucharist and a sense of profound unworthiness before so great a mystery; and 3) the conversion of barbarian peoples en masse with the danger of profanation of the Eucharist on the one hand and superstition on the other.6

The Carolingian Period until the Council of Trent

The six or seven centuries we are dealing with in this second period contain notable developments in Eucharistic theology and practice. Mention must be made of Berengarius (+1088) and the Eucharistic controversy that raged around him; the development of a new Eucharistic piety manifested in the desire to see the Host, with the resultant introduction of the elevation first of the Host, then of the Chalice at the Consecration of the Mass; the scholastic precisions about transubstantiation; the diffusion of the feast of Corpus Christi; the decline in the reception of Communion, and so on. Some of these factors contribute to new ways of reserving the Eucharist (the Sacrament-towers, for example). At other times, the force of custom results in the retention of more traditional forms. Righetti distinguishes five basic ways of reserving the Blessed Sacrament during this period:7

1) Propitiatorium: a container or small chest which was placed on the altar; hence a kind of portable tabernacle. The Fourth Lateran Council (1215-1216) prescribed that it should be locked and kept secure. This system was rather widespread in Italy in the thirteenth and fourteenth centuries.

3) Eucharistic dove: around the eleventh century this system was used: a metal dove (symbolizing the Holy Spirit), hollow, of modest proportions, which was suspended over the altar from the ciborium (if there was one), or on a small table next to the altar. This system was frequently used in France and England, but rarely in Italy. 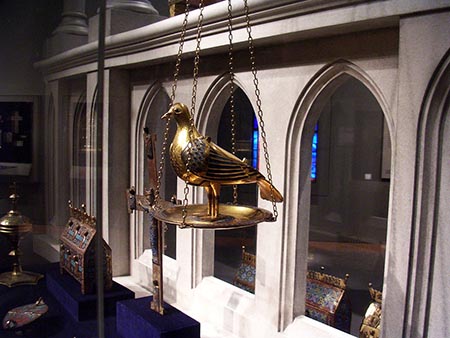 The sanctuary at San Clemente, Rome, with a wall tabernacle located at the right side. Photo: Peter Viktor Jurik

5) Sakramentshäuschen or Sacrament-towers: This was a specialty of northern Europe (Germany, Low Countries, and northern France) from the fourteenth to the seventeenth centuries. It was usually in the shape of a tower, built close to the altar, the consecrated host kept in a glass container protected by a metal grate of some kind. This responded to the popular piety developing at the time: the desire to see the host. These “towers” were actually a kind of monstrance, with a kind of permanent exposition of the Blessed Sacrament. One notes a great deal of variety according to time and place. At this time there is no standard practice for the universal Church. 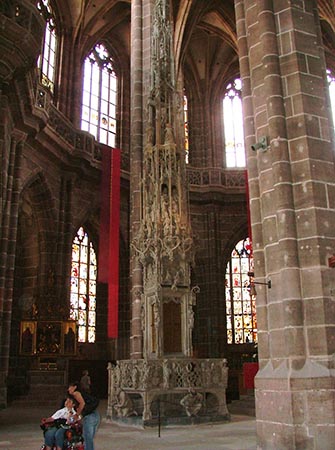 The Council of Trent to Vatican II

What changed Catholic practice radically in this third period was the Protestant denial of the Real Presence of Christ in the Eucharist, and the response of the Counter-Reformation to this challenge. While the Council of Trent affirms against the Reformers that the Blessed Sacrament should be reserved,8 the canon in question is not very specific, mentioning the place of reservation in passing as the sacrarium. Popular piety and two bishops will play an important role in establishing a new form of Eucharistic reservation. In the sixteenth century, even before the Council of Trent, Bishop Gian Matteo Giberti of Verona (+1543) ordered that the Eucharist should be reserved in a tabernacle on the main altar: “The tabernacle should be placed on the main altar, and should be installed permanently (bene et firmiter) in such a way that it can by no means be carried off by sacrilegious hands.”9 This eventually caught on in the neighboring diocese of Milan, such that in 1565, at the First Provincial Synod of Milan, it was decreed that: “The bishop should diligently see to it that in the cathedral, in collegiate churches, in parishes and all other kind of churches, where the most holy Eucharist is usually reserved or where it should be reserved, it be placed on the main altar, unless it seems to him otherwise, on account of some necessary or serious reason.”10 In 1576, another synod of Milan prohibited wall tabernacles, and ordered their destruction. Saint Charles Borromeo lent this new custom the full weight of his moral and spiritual authority. In the duomo of Milan, he transferred the Blessed Sacrament from the sacristy, where it had been kept up until then, to the main altar of the church. In 1577 Cardinal Borromeo’s book Instructionum Fabricae et Supellectilis Ecclesiasticae Libri II was published,11 a work which was to have enormous influence in shaping church architecture and design in the centuries to come. Concerning the tabernacle he simply argues from authority, without providing any other justification. Since the provincial synod of Milan in 1565 decreed that the tabernacle should be on the main altar, if possible, Saint Charles assumes that this practice will be followed, and gives instructions concerning the materials to be used, style, decorative motifs, measurements, etc. Because the Rituale Romanum of 1614 incorporated this practice into its “praenotanda” in the section of the Most Holy Sacrament of the Eucharist (Titulus IV, c.1, par.6),12 the custom of reserving the Blessed Sacrament in a tabernacle on the altar became known as “the Roman custom.” The placement on the main altar was not absolute, however, since it was foreseen that another altar might be more worthy or more suitable. Because the Rituale was not obligatory, the “Roman custom” of placing the tabernacle on the main altar spread only gradually, while other European countries maintained their local customs, sometimes for centuries.13 But the section on the tabernacle of Charles Borromeo’s Instructions had more influence than perhaps any other section of that work, and by the seventeenth to the eighteenth centuries, the altar tabernacle that is found almost everywhere is the tabernacle of Saint Charles Borromeo.14 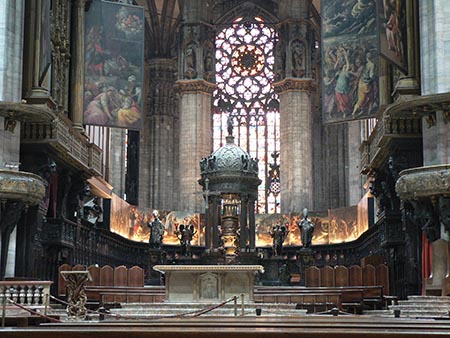 The extremely important shift that took place after the Council of Trent can be explained by a number of factors: 1) the Protestant denial of the reservation of the Blessed Sacrament and the Church’s affirmation of her doctrine in the clearest possible way by placing the tabernacle in the center of the high altar; 2) the resultant increase in Eucharistic devotions such as adoration and Exposition of the Blessed Sacrament; 3) the flourishing of Baroque architecture, especially in Rome, manifesting a larger-than-life enthusiasm and pride in the Catholic faith in the Eucharistic Presence; 4) the standardization of liturgical books (in this case the Roman Ritual) and the gradual standardization of liturgical practice as a result.

Vatican II to the Present

The fifty years that have elapsed since the Second Vatican Council have been characterized by enormous changes in liturgical theology and practice. The placement of the tabernacle in relation to the altar has been a topic of heated debate. What was normative in the post-Tridentine period has been largely rejected in the post-Vatican II period. While there has been general consensus about where the tabernacle should not be (on the main altar), there has been little consensus about where it should be. Theological disagreement about these issues has led to a rather confusing and sometimes contradictory pastoral practice. These changes will be traced in detail in the second section of this paper on Liturgical Norms. (Sacred Architecture Issue 23) 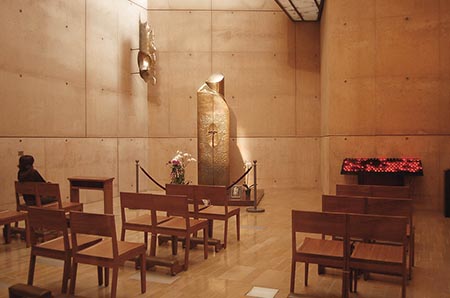 There were two main reasons for the enormous shift that has taken place. The theological motivation was to restore emphasis on the altar and the Eucharistic action of the Mass, as opposed to the adoration and worship of the reserved Sacrament (a kind of dichotomy between the Eucharist seen as sacrifice and the Eucharist seen as sacrament). The result in practice has been a decline in Eucharistic devotion. The pastoral motivation was to promote active participation by placing the altar versus populum. In older churches a common solution has been to place a new altar in front of the old altar, thus creating a certain cognitive dissonance in the worshipper, at least at the subconscious level. The dilemma of where to put the reserved Blessed Sacrament has been frequently resolved by creating a side chapel. While that has been the practice for centuries in great basilicas and cathedrals and is eminently suitable under those conditions, many modern renovations have been less than felicitous, and small and crowded Blessed Sacrament chapels can seem inadequate and even irreverent. The revised General Instructions of the 2002 Roman Missal attempt to resolve some of these dilemmas by proposing a new model.

Born in 1955 in Massachusetts, The Very Rev. Cassian Folsom, O.S.B. has been a monk since 1979 and a priest since 1984. He served as the pro-President of the Pontificio Istituto Liturgico at the Athenaeum of Sant’ Anselmo from 1997 to 2000, and is the founding prior of the Monastery of San Benedetto, located in Norcia, Italy, the birthplace of St. Benedict. Father Cassian is also a member of the Society for Catholic Liturgy, and is the author of numerous studies on Roman Catholic liturgy. In 2010, Pope Benedict XVI named Father Cassian as a consulter to the Congregation on Divine Worship and the Discipline of the Sacraments.