by Evan McWilliams, appearing in Volume 27

George Frederick Bodley (1827–1907) was one of the most influential architects of the later nineteenth century, so it is surprising that no substantial modern publication covering his life and work existed until Michael Hall’s George Frederick Bodley and the Later Gothic Revival in Britain and America became available in late 2014. Hall has published on Bodley before, though never on the scale of the present book, and his years of research into not only the man but the larger social context in which he lived and worked have informed a truly stimulating, scholarly publication. George Frederick Bodley is not a biography, nor is it an analysis of built works; it is both of these, with the addition of the often-missing but truly essential element of context.

What Hall has set out to do is to place Bodley within the larger narrative of nineteenth- and twentieth-century design. The quote chosen to head the preface is clear: George Frederick Bodley was, during his own day, considered by some to be “the most distinguished architect of our time.” That he came to be known only to the “cognoscenti of the Victorian Society,” as noted architectural historian Gavin Stamp put it in his recent review of the book for Country Life, is, for Hall, a sin from which the established canon of nineteenth-century architecture needs redeeming. He has more than succeeded in this aim. 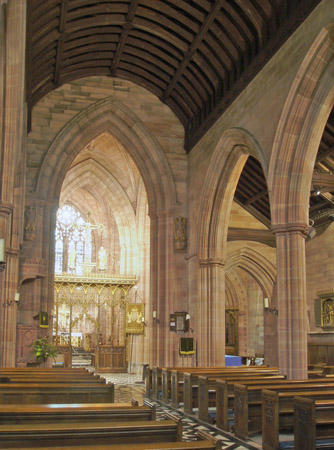 The desired reintegration of Bodley’s work is effectively structured, with the chapters being arranged largely chronologically. However, the approach is not merely to present a simple timeline but to set up the necessary background of Bodley’s personal philosophical and stylistic development, so that the works themselves come to speak a language rich with wider cultural nuance. Thus, chapters on Pre-Raphaelite architecture and Anglo-aestheticism tackle subjects as diverse as sacramentalism, sexual politics, and music. The integration, albeit necessarily brief, of concepts normally beyond the discourse of the average monograph make for a remarkably lucid understanding of Bodley’s buildings as living things rather than heaps of stones set one atop the other.

In addition to cultural analysis, Hall presents the practical side to Bodley’s practice. The discussion of associated craftsmen and building firms who made possible the works of an architect is seldom found, but Hall’s meticulous account of the involvement of others in Bodley’s vision of a refined Gothic style suited to the modern age demonstrates that no man, however creative, is capable of realizing such masterworks alone. The inevitable tensions involved in these partnerships make for thought-provoking reading.

Perhaps even more captivating is the chapter “Principles of Design,” in which the fundamental ideas that informed Bodley’s practice are set out. By asking the larger questions of intent and meaning, Hall provides a structure of ideas into which Bodley’s works individually may be grafted. One is enabled to envisage how an abstract idea such as “breadth,” “variety,” or “refinement” may produce a building as glorious as the memorial Holy Angels, Hoar Cross, or as austere as the monastic church of Saint John the Evangelist, Oxford. In going beyond the tangible to the largely intangible thought-world of Bodley himself, Hall has done a great service to the reader. No building by Bodley will ever look quite the same to one who has taken in such thoughtful discourse. 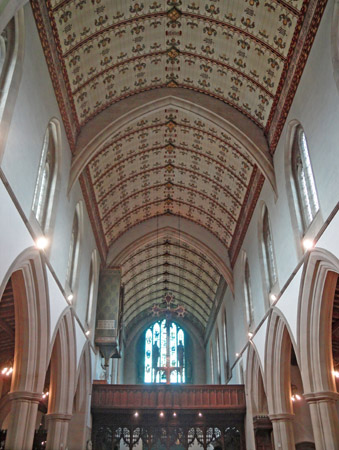 No work of this quality would be complete without copious illustrations, and Hall has indulged the reader’s curiosity by providing both excellent photographs of extant works and fascinating renderings of unbuilt projects. Plan drawings are provided for major works as well, and this exceedingly practical addition goes far toward making the written analysis that much more clear. Occasionally one wishes for more illustrations, but such additions, however interesting, would have made an already-large book (at 508 pages) completely unwieldy.

As it stands, George Frederick Bodley and the Later Gothic Revival in Britain and America may be considered one of the finest monographs on any English architect produced in a very long time. It compares very favourably with Geoffrey Brandwood’s Temple Moore: An Architect of the Late Gothic Revival (Paul Watkins Publishing, 1997) and Anthony Symondson’s Sir Ninian Comper: An Introduction to His Life and Work (Spire Books, 2006). All lovers of the architecture of the late nineteenth and early twentieth centuries would be remiss in not having Mr. Hall’s book on their shelves.

Evan McWilliams (MA, Architectural History, Savannah College of Art and Design) is currently completing his PhD at the University of York on a topic related to the late Gothic Revival.