Fordham’s “Jewel in the Crown”

Beauty and the arts go hand in hand. If beauty is meant to please, then Fordham’s “jewel in the crown,” pleases beyond measure. William Rodrigue designed the Fordham chapel in 1838 as part of St. John’s college seminary founded in 1839 by Bishop John Hughes. The art and architecture of the chapel create a visual atmosphere that engages the human for the sake of divine worship, its details being directed to the life of faith fashioned in the Jesuit spirit. Here the senses are awakened to marvel at its beauty and to feel God’s presence deep within. Here the senses form part of the act of faith, and faith becomes sensory. Bold assertions these, but what is the evidence? 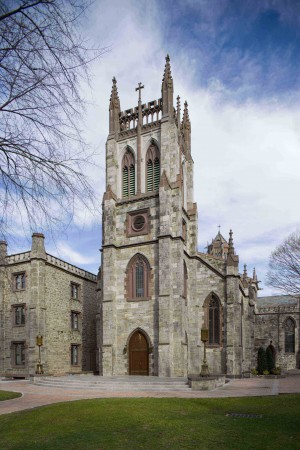 The church’s materials come from near and far, as do its influences. Designed in cruciform, the outer structure is built of local fieldstone and Yonkers granite, in blends of amber and grey. Rising ninety-five feet, the octagonal lantern, with pointed roof, spires, buttresses, and gargoyles, resembles Britain’s Gothic Cathedral at Ely. Its companion piece, a square bell tower of seventy-five feet with its own spires and pointed arches, bears the stamp of English Gothic. Together, their upward thrust of artistic grace unites heaven and earth.

At the main entrance, the plain wooden doors contrast with the imposing stone structure. The tympanum focuses on the figure of the Mother of God. Its Latin inscription, illi autem sunt in pace (“but they are in peace”), recalls those Fordham students who gave their lives in World War II. Carved into the oaken walls of the narthex are the two figures of Saint Ignatius, the soldier-saint and founder of the Society of Jesus, and Saint Michael, defender of those in battle. The walls of the narthex list the names of Fordham’s war heroes.

If the church’s exterior reflects strength and repose, its interior opens up a vista, “charged with the grandeur of God.” The eye, indeed all the senses, are caught up in soaring pointed arches, ribbed vaulting, and stained glass windows, all characteristic of Gothic architecture.

The church’s finest ensemble is revealed in a unique set of stained glass windows lining the walls of the nave. When in 1840, Bishop Hughes traveled to Europe seeking donations for his fledgling diocese, the French King Louis-Phillipe (1830–1848) gave him the six windows for Old Saint Patrick’s Cathedral in lower New York. Apparently, they were the wrong size, and in 1846 they were installed in the Fordham chapel. The Four Evangelists and Saints Peter and Paul, all with their traditional symbols, are depicted in these beautiful windows, styled in French Gothic revival. What symbolism do stained glass windows convey if not God’s light revealed here in red and blue, green, gold, and the royal of purple? Their rays bounce off one another in a play of luminosity, a metaphor for faith-in-action, the Christian’s response to God’s light. The same can be said of the spectacular traceries and borders of abstract design. To walk down the nave is to be bathed in the light of this powerful art form. We see, but only from the inside.

Suspended from the church’s ceiling hang brass lanterns glazed with mica and stained glass of ivory and amber. Here the play of light is created by the placement and intensity of the bulbs inside the fixtures. Again we have a suggestion of living faith. As if to put the finishing touches on these exquisite lanterns, small crosses of red and blue with gold leaf encircle their base. The Church’s ceiling is paneled in beams of polychrome wood, another feature that recalls Ely Cathedral. Here and throughout the church, we are enveloped by the warmth of wood and the mystery of light.

The apse holds two altars, both made of inlay marble originally taken from the altars at the Old Saint Patrick’s. The elaborate pre–Vatican II altar stands against the east wall while the freestanding altar is used for the Eucharistic celebration. In its center, the image of a lamb rests on a scroll with seven seals holding a victorious banner. A delicate motif of florets in rose and deep blue surrounds this symbol of Jesus Christ. Around the sanctuary, symbols of wheat and grapes are carved three-dimensionally into its marble. This familiar motif is also carved into the oaken walls in the apse. High above the altar of the Eucharist, on the inside of the octagonal lantern, cut glass of yellow, gold, and blue, so typical of British churches, shines down to focus on the altar. The Eucharist is reserved in an unadorned tabernacle at the south side, where the oils of anointing are also kept.

There are five locations in the church where the Jesuit spirit is prominently featured. Directly above the high altar, a Gothic figure of Christ the King robed in glory is carved in wood, as are the figures of the Four Evangelists. In the Spiritual Exercises of Saint Ignatius Loyola, meditation on the Kingdom of Christ introduces what is the central question of Ignatian spirituality: “How much more will I do for Christ?”

A huge three-paneled mural is positioned below this figure of Christ. It was painted in the 1920s by Hildreth Meiere, one of the most famous American artist of murals and mosaics. In addition to the Mother of God, Saints Joseph, John the Baptist, Basil, and John Chrysostom, Thomas Aquinas, Thomas More, and others, luminaries of the Society of Jesus are presented as inspirations to Fordham’s students: Ignatius Loyola, Isaac Jogues (saint and martyr of New York State), Robert Bellarmine (Doctor of the Church), Peter Canisius (apostle of German universities), and Edmund Campion (scholar-saint-martyr and the Light of Oxford). The mural reminds students, first, that the Universal Church boasts saints from every walk of life; second, that wisdom and learning (sapientia et doctrina), Fordham’s motto, have characterized the Church in every age, and finally, that the Christian East is revered as a vital part of the Universal Church.

A triptych of oaken wood depicting three Jesuit saints who died in their youth hangs on the north transept wall. Saints Aloysius Gonzaga, John Berchmans, and Stanislaus Kostka are pictured in their garb as college students. Three “Jesuit” windows, made in Munich, are located on the wall of the south transept. In the first window, Saint Ignatius responds to a vision of the Holy Trinity at La Storta, Italy; in the second, Saint Aloysius Gonzaga receives the Eucharist from Saint Charles Borromeo; and finally, in the third, the great missionary Saint Francis Xavier preaches to his flock in the Indies. Here we see the Ignatian ideal of finding God in all things—in prayer, in the Eucharist, and in action.

Finally, at the side altar near these windows stands a reliquary containing first-class relics of Saints Charles Garnier, Gabriel Lalemant, and John de Brébeuf, three of the eight Jesuit North American martyrs who died between 1642 and 1649 at Auriesville, New York, while ministering to the Iroquois and Mohawk Indians. The reliquary of Russian malachite lapis lazuli features a statue of an Indian holding the relics in his hands. The remains of the other five Sts. René Goupil, Isaac Jogues, Jean de Lalande, Antoine Daniel and Noël Chabanel were unfortunately destroyed. The presence of these relics, encased so beautifully, expresses the dual pride that Fordham takes in its Jesuit and New York history.

Other sacred art in the church includes two sets of stained glass windows in the sanctuary, Stations of the Cross carved in wood by Pietro Montana , and a triptych of the Holy Family. 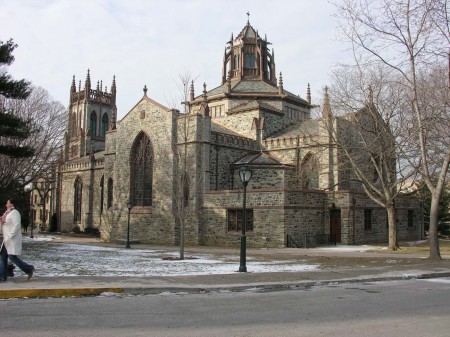 The church’s early builders and conservationists have cared enough to give God their very best. In their hands, the visual arts have become incarnational: the senses participate in and are raised to the spiritual, and the spirit unites itself to the senses. Let us recall what we already know that we live out our Christian vocations in our bodies in this material world. It is here, and nowhere else, that God’s great work of the Incarnation is accomplished. We live as co-creators with the Divine Artist. After all, we are called to become “God’s works of art” (Eph 2:10), to make things beautiful, to make beautiful things, and to help others do so as well. More than a work of art, the church at Fordham is a labor of love, and on entering it, we repeat the words of the apostles on Mount Tabor, “Master, it is wonderful for us to be here” (Mt. 17:4)!

Sister Joan L. Roccasalvo, C.S.J., writes from New York City. Her scholarly research focuses on the relationship between the arts, faith, and culture. She holds PhDs in musicology and in liturgical studies.