Epic Building in an Era of Destruction

The opening lines of Dickens’s A Tale of Two Cities describes well China’s state of sacred building in recent decades: “It was the best of times, it was the worst of times, it was the age of wisdom, it was the age of foolishness…it was the spring of hope, it was the winter of despair, we had everything before us, we had nothing before us.”1 Recent months have seen an unprecedented amount of church destruction as the state seeks to reassert it socialist line. Local officials recently affirmed the party’s dominance over “backwards religion” by removing the steeple cross on a majestic Protestant church near Shanghai, in Wuxi Village. A parishioner welded it on again the next day—he was promptly arrested for operating an “unlicensed welding business.” Authorities have removed or threatened to remove more than 130 crosses on other churches. In Pinging County, party officials reduced a Catholic church to debris. While one Chinese church suffers the whims of party hostility, another is built or restored with extravagant support. 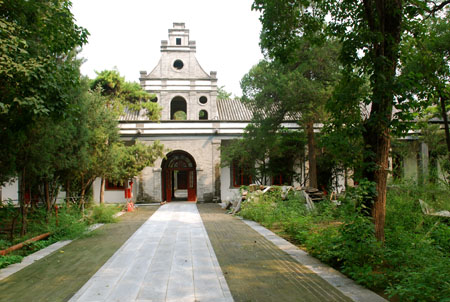 For motivations even unknown to local Christians, a series of new church projects and restorations have been initiated in some of China’s most Christian regions. Among the most high-profile projects today is the restoration of the magnificent former bishop’s residence adjacent to Beijing’s largest Catholic church, the French Gothic former cathedral church dedicated to Christ the Savior. Confiscated during the Maoist era, the handsome buildings and elaborately appointed chapel were simply covered to be reused as a school. Several years ago the state returned the bishop’s residence to the Diocese of Beijing and has begun careful restoration with government funding. Some Catholics suppose that this restoration will function to demonstrate the party’s “good will” toward religious practice, and become a gem in the city’s architectural landscape. 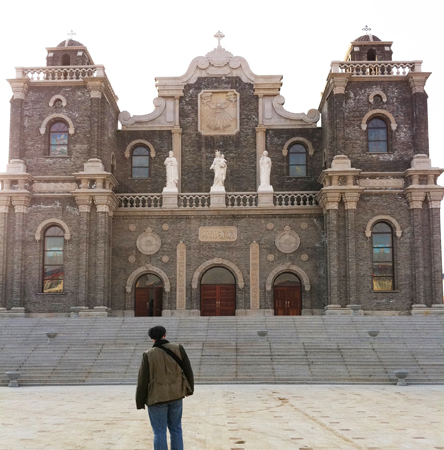 Before his death, Shanghai’s bishop, Aloysius Jin Luxian, tirelessly wrote letters to Catholics around the globe outlining his wish to rebuild his shattered diocese. Bishop Jin’s efforts were more successful than he expected; not only was he able to restore the churches of his diocese that had been seized during the 1960s, but he was also able to commission the construction of new Catholic facilities, mostly built in styles sympathetic to structures erected during the late nineteenth and early twentieth centuries. The Shanghai diocese gained an impressive seminary complex at Sheshan, the Qing Pu Catholic Preparatory School, the Holy Mother Convent for elderly sisters, the Congregation of the Presentation of Mary, the Xu Guangxi Catholic Research Center, a multi-storied chancery that rises above tall spires of Saint Ignatius Cathedral, and several other Catholic structures such as a popular retreat center and publishing house. Other dioceses such as Shanxi, Hebei, and Guizhou are actively building new churches, almost exclusively in classical Western styles, as funding increases from state and private sources. Chinese Christians remain committed to erecting beautiful churches in Romanesque, Baroque, and Gothic styles that elevate the soul to God, embody the Church’s organic architectural heritage, and express the permanence of the Christian faith in a context that is as hostile to the presence of religion as it is committed to demonstrating tolerance for its practice. 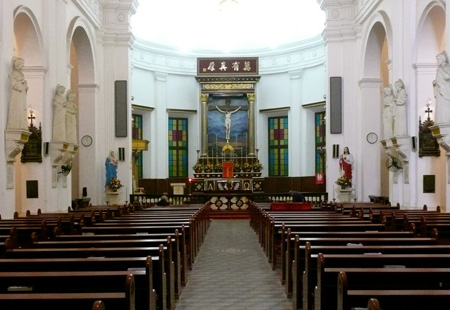 China’s “tale of two churches” is laden with complexities; as this report comes to print, thousands of Chinese Christians lament the recent state demolition of the massive Sanjiang church near Wenzhou, while others celebrate the impressive new Church of the Sacred Heart outside of Taiyuan, in Shanxi. Dickens also wrote: “I see a beautiful city and a brilliant people rising from this abyss.”2 Most often we hear of church destruction in the news, but as many churches are rising from the ground, China’s Christians “make all things new” by perseverance as they seek ways to create sacred spaces where destruction had seemed to prevail.

Dr. Anthony E. Clark is the Edward B. Lindaman Endowed Chair and Professor of Chinese History at Whitworth University. His most recent book is China Gothic: The Bishop of Beijing and His Cathedral.