Catholic Charities and the Redevelopment of Public Housing

by Anthony Goldsby, appearing in Volume 24

The 2010-2011 renovation of Dearborn Homes on Chicago’s South Side is a remarkable reminder how effective legislation, great architecture, and social justice advocating the poor not only have the power to improve a blighted public housing development, but successfully empower the lives of the people who live there.

Dearborn Homes was praised as a new model for urban living after its completion in 1949. Located a few blocks from Mies van der Rohe’s iconic IIT campus, Dearborn Homes came from the New Deal philosophy regarding urban housing for the poor, as well as modern architectural theory. Using the “Tower in the park” philosophy, public housing has been a cheaper version of the efficient space, repetitive building planning, and clean design that modernism promised.

Dearborn Homes, one of the earliest subsidized public housing examples in the United States, tore down existing urban fabric and replaced it with towers surrounded by undefined open space. Access to daylight and air by spreading out towers ranging from nine to sixteen stories was initially seen as an improvement on the cramped slums of the turn of the twentieth century. This slum clearance strategy had benefits, but, in hindsight, was outweighed by the disadvantages.

The cheapness of the building design, displacement of amenities, dismantling of existing social networks, and physical constraints crippled the Dearborn Homes. The traditional neighborhoods were replaced with “superblocks” absorbing the smaller and older blocks, adorned with repetitive, inexpensive cruciform bulky towers. This reduced pedestrian and vehicular traffic in the development. The low cost construction of public housing was due to inadequate federal funding, which added to the lack of architectural character and beauty, disheartening the local residents. With construction of the Dan Ryan Expressway (I-94) in 1962, the neighborhood was cut off from social amenities, which decimated the neighborhood by forcing social isolation. The economic and institutional segregation of African Americans from the 1940s-1970s exacerbated the unlivable conditions of Dearborn Homes and many other public housing developments. This accelerated the area’s decline further in the 1970s and 1980s with crime and violence, with gang activity dominating the area after 1990.

Journalist Jane Jacobs argued in her book, The Death and Life of Great American Cities, that greater resident interaction is a deterrent to crime, and street activity and community prevent crime. As time went on, Dearborn Homes became a prime example of the crime and decay in America’s public housing through its physical design and racial segregation. The physical and psychological damage to the children living there reinforced a lack of hope.

In 2010, the Chicago Housing Authority (CHA) planned renovations to correct the mistakes of the past and address the failed developments by introducing beauty, strong design, and safety into the project. The development has been retrofitted using the neo-Georgian style as a design reference. The small squat windows on the façades with principal rooms behind were replaced with large mullion double-hung windows with elongated proportions, creating a friendlier exterior. The flat roofed square buildings were given stone pediments to soften the cruciform tower blocks and symbolize elegance. A vertical string of windows with proportions like French doors with Juliette balconies were introduced which aligned with the dining areas of the apartments; breaking the scale down the long brick wing walls. Stone quoining was used on the corners of the building to give the impression of durability. The modernist thin concrete entrance canopies were enclosed within traditionally detailed metal porches, which have enhanced shelter from the weather and provide a formal entrance. The limestone adornments only count for 1% of the project cost of $165.6 million dollars, of which $28 million was federally funded from the American Recovery Reinvestment Act. 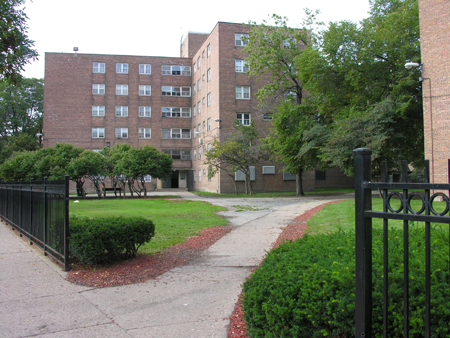 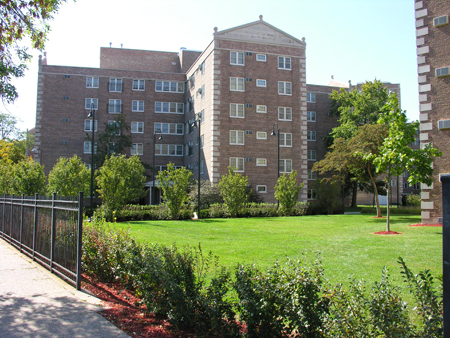 Dearborn Homes before and after the renovation by Henry Zimoch of HPZS, Chicago.

According to the CHA’s website, designer Henry Zimoch (a principal at the Chicago architecture firm HPZS) is the mastermind behind the Dearborn Homes’ internal and external remodeling. A fan of Georgian architecture, Zimoch had the simplest approach to the Dearborn Homes, and one that could have saved many other projects: to “work with the existing cross-shaped buildings and dress them up Georgian style.”
The interiors were the next step of the transformation. The apartment count was reduced from 800 to 660, which allowed the apartments to be increased in size and to right-size the apartment number to the families registered with the CHA at Dearborn Homes. Additional sunlight is captured in the interior from the increased apartment size and improved glazing. This created a more welcoming interior with supplementary sunlight in the apartments and interior corridor spaces. Corridor walls were upgraded from drab cement block by means of bright blue and white glazed tile, capable of greater luminance of the natural light. The spacious units have an open layout for living and dining coupled with an additional bedroom. Gutted down to its concrete frame, new plumbing, heating, and electrical systems were installed. Items such as doorbells, more closet space, closet doors, modern appliances, and air-conditioning have been provided, normally taken for granted in market-rate developments. This gave residents the welcomed perception they live in townhomes rather than subsidized public housing.

The final steps address the site and security. Additional improvements were the landscape upgrades with new trees, plantings, and a playground for children to erase the desolate atmosphere of the development. Remodeled laundry rooms and common areas, which were havens for criminal activities due to a lack of supervision, were upgraded with cameras for more visibility by the management company. Additional security personnel were hired by the management company. Residents began weekly coordination meetings with Chicago police of District 21, which has dropped gang related and violent crime considerably. Moreover, there was a concerted effort by policy makers and management to understand what the residents wanted, something that was missed during the first fifty years of public housing. Finally, through a corporate sponsor, a technology center was established in the housing development to provide residents with general computer literacy, build self-esteem, and positive social interaction in a safe environment.

External factors assisted the neighborhood in reducing its blight, such as the economic expansion from 2000-2010. IIT’s campus has expanded and benefited from the growth of its off-campus student population by adding student housing. Restaurants spinning off of the redevelopment of US Cellular Field have had some impact. All of these improvements, coupled with a safe environment, increase foot traffic and the number of residents with eyes on the street.

Why is this story of public housing and social justice relevant to Catholics?

Dearborn Homes reflects the goals of the legislation championed by Monsignor John O’Grady, the Executive Secretary for National Council of Catholic Charities, now Catholic Charities, from 1920 until 1961. For four decades, O’Grady was instrumental in tirelessly advocating widespread social reform based on Catholic principles, such as: New Deal legislation, the Social Security Act, child welfare, housing legislation, job training, a liberal immigration policy, and work in community housing projects for Catholic immigrants and minorities.

Monsignor O’Grady believed a decent house was so essential to helping people out of poverty that he helped establish the first National Public Housing Conference in 1931, which initiated the National Housing Act of 1934. This act created the Federal Housing Administration and made housing and home mortgages more affordable. For several decades, O’Grady worked determinedly with the federal government to enact legislation for affordable housing, culminating in the Housing Act of 1949. This was a landmark law that provided for massive slum clearance projects and money to construct more than 800,000 public housing units by 1955. This piece of legislation had an enormous impact on the landscape of American urban areas in the second half of the twentieth century.

Affordable housing during its initial fifty years never fully realized the vision of Monsignor O’Grady for improving the lives of the poor, but the infrastructure of affordable housing was incubated by him to create a legacy capable of correcting social ills that plagued many Catholic immigrants. For today’s Catholics, continuing the pursuit of social justice in public housing is a part of the mission Monsignor O’Grady started.

The non-profit community, such as Catholic Charities, the Marillac Center, and St. Vincent de Paul Societies of Chicago, still pursues issues of social justice, affordable housing and education, but they cannot do this work alone. Catholics need to urge other parishioners and government authorities to address issues of affordable housing. The latest recession and federal budget cuts threaten the means of the poor to enhance their standard of living and is in danger of being ignored. Donations, volunteerism, and political support are needed to: prevent homelessness; pass a comprehensive plan that addresses the foreclosure crisis; provide tax incentives to help non-profits develop safe and affordable housing; encourage education programs for the youth; and provide safe, affordable housing for seniors. These are some of the ways Catholics can support the transformation that happened in Dearborn Homes.

Dearborn Homes reflects how advocacy for social justice can empower the lives of the residents in public housing, which was the legacy of social justice advocated by Catholic Charities under Monsignor O’Grady. Dearborn Homes is a great example of keeping the existing development and not displacing the residents, keeping residents’ social networks intact, and allowing the current community to thrive. The transformation shows how public housing can work effectively if good design, strong management, government policies, and responsible funding are implemented. It gives the current residents pride in a safe place they can call home.

Tony Goldsby resides in Winchester, England with his wife. He works as a Planner for Tetlow King Urban Design and Masterplanning. Tony is on the board of Lambda Alpha International-London Chapter, a land economics society.