America’s diverse faith traditions and their teachings are expressed through both soaring and humble architecture, in prayer and liturgy, in song and art, through financial support, and through gifts of time and talent. Given the fundamental role of the physical facility in the life of the congregation, it follows that facility management tasks subsequent to design and construction—which may seem mundane and repetitious—are integral to the success of the church mission. Skilled, professional operation and maintenance (O&M) not only drive and protect the facility, but also help realize and enhance the mission of the sacred space.

While the traditional pulpit and altar are both symbolic and functional, an efficiently operating heating/air-conditioning or lighting system hardly comes to members’ minds as woven into the church mission. However, facility managers understand how dependent we have become on energy-consuming buildings and equipment to achieve much of what we define as the work of the church. It is easy for facility managers to imagine reactions to the soup kitchen without refrigeration or cooking equipment; to church services, counseling, or community meetings without lighting or automation; or to congregating at whatever temperature and humidity the local weather dictated.

But does energy efficiency not require expensive, state-of-the-art, fully automated Energy Management Systems, expensive LED lighting, SEER 16 HVAC, argon gas-filled windows, and solar cells on the rectory? No, not at all. Every site is different, but it all starts with smart O&M and no-cost, low-cost, common-sense efficiency. Then, based on “return-on-investment,” you can leverage savings into costlier capital upgrades with higher savings.

Worship facilities—historic and new, small and large—are using energy efficiency to steward financial and natural resources in service to their faith. Here are a few examples.

Saint Frances Cabrini Catholic Church of West Bend, Wisconsin, is the first Catholic church to achieve national ENERGY STAR® certification, and in November 2013 it was one of forty-two such U.S. worship facilities receiving commendation letters from President Obama. Certification indicates energy efficiency that is in the upper 25 percent for American worship facilities, as verified by a licensed professional architect or engineer. 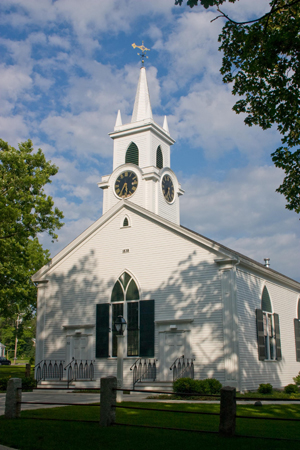 Sisters, Servants of the Immaculate Heart of Mary, Monroe, Michigan

Sisters, Servants of the Immaculate Heart of Mary in Monroe, Michigan, is a past national ENERGY STAR award winner. This religious order was founded in 1885. Their 376,000-square-foot motherhouse was solidly built in 1932, but by the mid-1990s, many of the building’s systems had outlived their usefulness. However, the facility was still home for approximately 240 retired sisters, and was administrative headquarters for the congregation. The sisters considered constructing a new building but concluded it was more environmentally sound and consistent with their values to refurbish and upgrade the existing structure. The sisters reinstalled 800 restored windows, 500 refurbished doors, over 100 historic light fixtures retrofitted for CFLs, and a new geothermal system that provides heating and cooling. The sisters estimate they are saving nearly $180,000 in energy costs and reducing greenhouse gas emissions by over four million pounds annually. 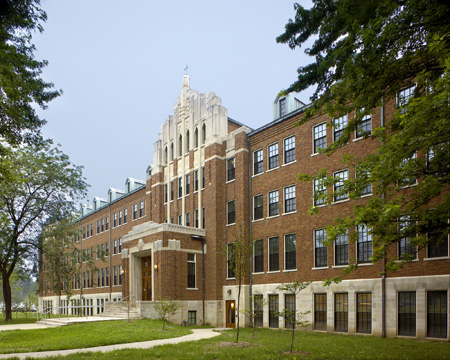 From their first building in 1896, subsequent buildings connect around a central quadrangle, and the facility now totals 28,000 square feet. Nearly 35 percent of the present facility is a full-time nursery day school, and a staff of twelve serves approximately 900 members, with average attendance of 350 at Sunday services. 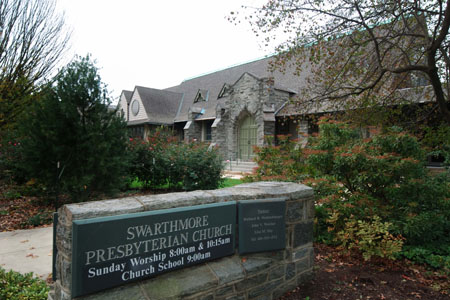 Swarthmore’s first ENERGY STAR award represented a 40 percent savings from baseline, but the church did not stop there. Savings from an initial HVAC upgrade helped replace one of two 440,000 Btu hydronic boilers with one ENERGY STAR-qualified, 195,000 Btu condensing boiler rated 95 percent efficient. The new boiler serves three heating zones controlled with programmable thermostats. An older water heater was replaced with a storage tank supplied by the new boiler. The remaining older boiler heats the least-used area, so was not a cost effective upgrade at the time.

Rezoning the central air conditioning into six zones controlled by dampers and programmable thermostats significantly increased comfort in administrative offices. A new roof over the office area included radiant-barrier rigid foam applied to the roof decking, and a white roof membrane for the flat section of the roof. Swarthmore Presbyterian Church estimates that they are saving more than $8,000 annually in energy costs.

First Baptist Church and Shiloh Christian School of Springdale, Arkansas, is a past national ENERGY STAR award winner that began in 1870 as Landmark Liberty Baptist Church in the home of one of its thirteen members. Fast-forward to a worship center and two educational buildings built in 1979, followed since by regular renovations, repurposing, and new additions (including three different HVAC systems)—with a very large utility bill. By 2010, over a fourteen-month period, the church began saving $250,000 annually with no major overhaul or equipment replacement in its 330,000-square-foot facility. The energy manager credits monitoring energy use and patterns, as well as education and training of staff and members on how to better use energy, based on ENERGY STAR guidelines and working with an ENERGY STAR service and product provider.

ENERGY STAR-certified Green Castle Baptist Church of Louisville, Kentucky, was organized in July 1869 after word of the Emancipation Proclamation spread, and the church began prayer meetings in an old cabin along the banks of the Ohio River. After 127 years, incremental remodeling and expansion resulted in overcrowding that in 1996 led members to begin planning a new church. After a successful capital campaign, in 2005 the church began construction of an efficient new facility northeast of Louisville, Kentucky. In 2007, Green Castle Church held its first worship service in the new facility, which employed CFLs throughout, a tight building envelope with double-wrap ductwork, efficient windows with film to reduce solar heat gain, and computerized controls for zoned HVAC. The air handler unit (AHU) has separate coils for chilled and hot—each side being well insulated. The AHU monitors indoor and outdoor temperatures, pulling in fresh outdoor air as appropriate. Sixteen fan-powered terminal (FPT) units and five variable air volume (VAV) units are networked and computer controlled to optimize temperatures based on occupancy.

These ENERGY STAR congregations believe that good stewardship does not allow for wasting about a third of their congregational energy budget, so they took action. They knew that money wasted on inefficient, unnecessary energy use directly takes away from the needs of the ministry, while also withholding nonrenewable natural resources from our children and their children. They understand that wasted energy unnecessarily generates toxic emissions that threaten human life and health globally as well as locally.

Fortunately, the reverse is also true, and saving money by saving energy reduces pollution that is particularly dangerous to the already ill, the elderly, the vulnerable poor, and those in the womb. Professionals who design, build, and maintain our sacred places have a special opportunity—arguably a responsibility—to achieve a cost-effective level of energy efficiency. In achieving an energy-efficient church, we are also helping care for God’s creation and for future generations.

EPA’s primary mission is the protection of human life and health, as well as the natural resources and ecosystems that sustain us. In asserting with the faith community this common concern for human health, Administrator Gina McCarthy quotes President Obama, who said America must lead the transition toward a sustainable energy future to “preserve our planet, commanded to our care by God.”

EPA initiated ENERGY STAR to help Americans reduce energy waste through cost-effective strategies for more efficient products and buildings where we live, work, learn, shop—and worship. In 2012 alone, Americans—with the help of ENERGY STAR—saved $24 billion on energy costs and prevented 242 million metric tons of greenhouse gas emissions (GHG), providing over $5.8 billion in additional benefits to society by reducing damages from climate change. Over the past twenty years, nearly 20,000 organizations have partnered with ENERGY STAR to cumulatively save over $230 billion on utility bills, while preventing more than 1.8 billion metric tons of GHG emissions.

The Conference for Catholic Facility Management (CCFM) has reinvigorated its Energy and Environment Committee and is working with ENERGY STAR to educate CCFM members. While more than twenty-five Catholic hospitals have achieved ENERGY STAR certification, only one Catholic church has earned the ENERGY STAR. However, discussions with CCFM and the Catholic Coalition on Climate Change indicate that many Catholic churches are striving to cut energy costs.

Jerry W. Lawson is the National Manager for U.S. EPA’s ENERGY STAR congregations program. He previously served as Executive Director for Conservation, Customer Service, Rates and Forecasting at the Lower Colorado River Authority (LCRA), a central Texas regional utility. Prior to LCRA, Lawson headed energy and water management for the City of Austin, Texas as Director for Resource Management. A native Arkansan, Lawson also served as Deputy Director for Conservation and Renewable Resources at the Arkansas state energy department.