by Nathan Cochran, appearing in Volume 25

Archabbot Boniface Wimmer, O.S.B.—the founder of Saint Vincent Archabbey in Latrobe, Pennsylvania, and “Patriarch” of the Benedictine Order in America—believed that it was the duty of monasteries to bring culture to America. In 1849, he wrote to his patron, King Ludwig I of Bavaria: “I have determined that our monasteries should not be simply schools for religion and learning, but should also serve as custodians of the fine arts and thus foster greater appreciation for culture…”

Artists and artisans were needed as part of Wimmer’s plan to spread the Benedictine Order across the continent. One of the most successful of these was Brother Cosmas Wolf, O.S.B. He was born Johann in Bavarian Swabia on June 20, 1821, and was educated to at least the age of fifteen. In addition, he apparently had art training before coming to the United States to become a Benedictine lay-brother at Saint Vincent Archabbey in 1853.

Shortly after receiving his monastic training and making vows, Brother Cosmas went back to Bavaria in 1857 to study sculpture under the church designer Johann N. Petz. He returned to America in 1862, and became the founding director of the Covington Altar Building Stock Company in Kentucky. It was a prolific studio that fulfilled the needs of Catholic German-Americans throughout what is called the “German Triangle,” creating and designing everything from altars, paintings, pulpits, and church windows to altar sets, croziers, and sacred vessels.

Brother Cosmas assembled some of the best church artists of the nineteenth century to assist him, including the painters Johann Schmitt and Wilhelm Lamprecht, and he took on an apprentice by the name of Frank Duveneck, who later became one of the most important artists and teachers in the American Impressionism movement. 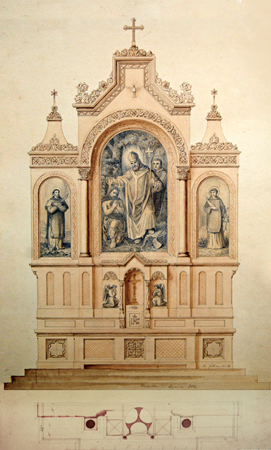 Altar plan for Saint Boniface Church, Quincy, Illinois, 1863-4. This altar plan was built exactly according to the drawing, but it was razed after lightning struck the church in 1959, causing extensive fire damage. Photo: Jordan Hainsey

From 1862 to 1868, the studio worked on projects for as many as nineteen churches in seven different states. Some of the more important projects were altars for Saint Francis Xavier Church and Saint Francis Seraph Church, both in Cincinnati, Ohio; Saint Joseph Church, Covington, Kentucky; Saint Boniface Church in Quincy, Illinois; and Saint Mary’s Abbey Church in Newark, New Jersey. Unfortunately, none of those projects—except most of the sculptures from the altars in Newark—exist today. This is also the case for many of the studio’s other projects. Some have been destroyed by tragic fires, tornadoes, and floods; some have been razed; others were dismantled due to changing liturgical tastes. However, many of these works can still be known by studying Brother Cosmas’s original design drawings, of which there are more than eighty in the Saint Vincent Art Collections. 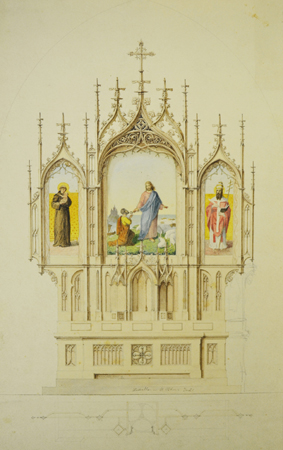 Altar plan for Saint Peter Church, Brookville, Indiana, ca. 1864-5. The altar for this church was built with slight modifications to the altarpiece. It still exists, but much of the tracery and finials were removed during a renovation in the late 1970s or early 1980s. Photo: Jordan Hainsey

By 1868, Brother Cosmas relocated his studio to Saint Vincent Archabbey, where he expanded his talents to include architecture. He designed multiple churches, monasteries, and schools, as well as at least one house. Some of these buildings have been identified as corresponding to ones at Saint Mary’s Abbey in Newark, New Jersey, and Saint Benedict’s Abbey in Atchison, Kansas. Although he has been credited with the planning and execution of many of the buildings at Saint Vincent between 1862 and 1894, no corroborating drawings have yet been found. 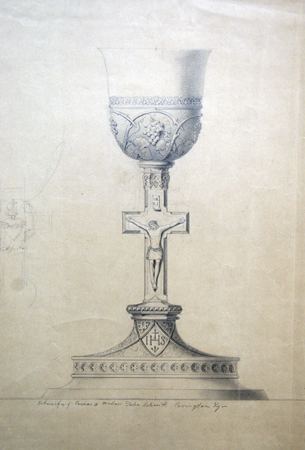 Brother Cosmas remained active, continuing to design buildings, altars, and other church furnishings until his death in 1894. Although his life has been relatively uncelebrated, his art has touched the lives of thousands of people through his altars, designs, and buildings in dozens of churches and religious communities spanning ten different states.

The Saint Vincent Gallery at Saint Vincent College recently had a retrospective exhibition on Brother Cosmas and his work. There is a catalog available. 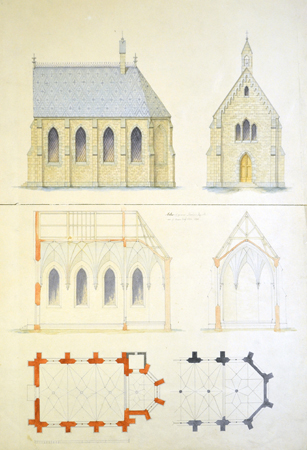 Architectural plan for a chapel, 1875. It is not known if this proposal was for an actual project, and if it was built. Photo: Jordan Hainsey 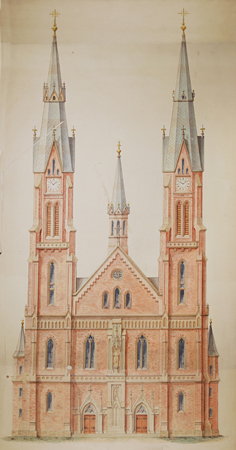 Front elevation for a large Neo-Gothic church, 1889. Although not identified, it is believed that this drawing was a proposal for a new abbey church at Saint Vincent, which was being planned at that time. Photo: Jordan Hainsey