A Case of Mistaken Loves

by Jem Sullivan, appearing in Volume 13

In a recent papal address delivered at the Vatican Museums, Pope Benedict XVI offered these thoughts on Christian art and architecture. “In every age,” the pope noted, “Christians have sought to give expression to faith’s vision of the beauty and order of God’s creation, the nobility of our vocation as men and women made in his image and likeness, and the promise of a cosmos redeemed and transfigured by the grace of Christ.” The pope then spoke of the permanent value of Christian art and architecture when he pointed to the fact that “the artistic treasures which surround us are not simply impressive monuments of a distant past. Rather … they stand as a perennial witness to the Church’s unchanging faith in the Triune God who, in the memorable phrase of Saint Augustine, is Himself ‘Beauty ever ancient, ever new.’” 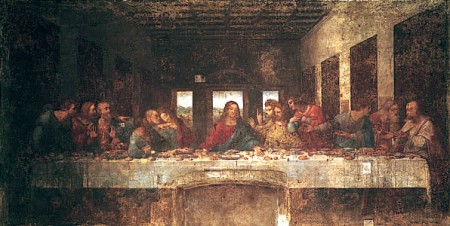 DaVinci’s Last Supper has been misinterpreted and twisted to serve an agenda. Public Domain

If the treasures of Christian art and architecture are, indeed, “perennial witnesses to the Church’s unchanging faith,” then one might ask whether the faithful are equipped to better appreciate the genuine Christian meaning of such artistic witnesses to faith. Or to put it another way, do the faithful receive adequate catechetical preparation to discern interpretations of Christian works of art and architecture that subtly or overtly contradict the Church’s unchanging faith?

A Case in Point
A recent and obvious case in point is the sensational claims made by the novelist Dan Brown in The Da Vinci Code. All Brown’s assertions converge on his interpretation of what is undoubtedly Leonardo da Vinci’s greatest masterpiece, The Last Supper. And it is interesting to note that in order to support his claims, Brown needs an image, not history, not biblical theology or doctrine, and certainly not faith. Only one image that, in the author’s mind, seems to explain it all.

While Christians endlessly debate the fine points of historical and doctrinal errors contained in the novel, there is no getting away from the fact that many of the faithful were catechetically challenged in their efforts to interpret a Christian masterpiece like Leonardo’s Last Supper. Even in casual conversations many faithful found themselves simply unable to interpret a Christian work of art in ways that would deepen, not undermine, their faith. Consequently many were confused by the novel’s claims, based on religious art and architecture, about Christianity, even though those claims clearly challenged basic Christian doctrines. And a fresh pastoral challenge took shape in the process. For it is one thing to have works of Christian art and architecture routinely misinterpreted by novelists. It is quite another when the faithful find themselves unable to discern the genuinely Christian meaning of such treasures of art. With this cultural example and trend in mind, helping the faithful to reclaim a Christian interpretation of art and architecture takes on greater urgency.

One Image, Many Meanings
Painted between 1494 and 1498, Leonardo’s Last Supper has dominated the popular imagination as few masterpieces of Western art and architecture have. At once sublime and tangible, direct and complex, Leonardo’s image of Jesus at table with his disciples on the eve of his death on the Cross, has given way to innumerable speculations down to our own day. But as each new wave of ideological or psychological meaning obscures the painting, one thing becomes increasingly evident. If as Christians we wish to gain a religious understanding of this religious masterpiece, it is the original biblical texts that provide the most reliable source for its interpretation. Another more recent source that also offers compelling insights into the Christian meaning of Leonardo’s Last Supper is Pope Benedict XVI’s first encyclical letter Deus Caritas Est. Placing the rich theological reflections of this latest papal teaching at the service of a genuinely Christian reading of Leonardo’s Last Supper is the focus and aim of this article. It is also offered as one example of how the faithful might interpret great works of art and architecture so that these artistic treasures remain, even in our own day, “perennial witnesses to the Church’s unchanging faith.”

The Christian Meaning of Love
In Deus Caritas Est (henceforth DCE), Pope Benedict XVI speaks of three kinds of love: eros, philia, and agape. Eros, according to the Greeks, is the love of man and woman, while philia refers to the love of friendship. Agape points to the new and distinct Christian view of love grounded in faith; ultimately it is the love of God manifest in the paschal mystery of Jesus’ life, death, and resurrection, and, since the institution of the Eucharist at the Last Supper, made present sacramentally at every Mass.

With “eyes of faith” Caravaggio’s Supper at Emmaus can be understood correctly. Public Domain

A recurring idea in this first papal encyclical is that from a Christian standpoint these three forms of love—eros, philia, and agape—are not to be cut off from each other. If eros, for instance, remains simply an “intoxicated and undisciplined” overpowering of reason it becomes “warped and destructive.” As the pope points out, Christianity offers the distinct view that “eros needs to be disciplined and purified if it is to provide not just fleeting pleasure, but a certain foretaste of the pinnacle of our existence, of that beatitude for which our whole being yearns” (DCE 4).

Agape expresses the biblical notion of a love that is “no longer self-seeking, a sinking into the intoxication of happiness; instead it seeks the good of the beloved; it becomes renunciation and it is ready, and even willing, for sacrifice” (DCE 6). In other words, when it comes to love, biblical faith “does not set up a parallel universe, or one opposed to that primordial human phenomenon which is love … it intervenes in the human search for love in order to purify it and reveal new dimensions of it” (DCE 8).

A Case of Mistaken Loves
Art historians see marked similarities in Leonardo’s depiction of John’s flowing long hair and gentle features with his other paintings of the apostle. Yet there is still another way in which Brown’s claim that Mary Magdalene is the figure next to Jesus in Leonardo’s Last Supper is simply off the mark. In fact, from a Christian standpoint, of all Brown’s claims this is where he could not be more mistaken.

The mistaken identity of Mary Magdalene as the figure seated next to Jesus in Leonardo’s Last Supper can only thrive on a case of mistaken love, a confusing of philia and agape for eros, a substituting of one love for another. For sure Mary Magdalene loved the Lord as a disciple and follower. But her love was not a “warped and destructive form of it, a counterfeit divinization of eros that actually strips it of its dignity and dehumanizes it” (DCE 4). Furthermore, as the encyclical notes, “as for the term philia, the love of friendship, it is used with added depth of meaning in Saint John’s Gospel in order to express the relationship between Jesus and his disciples” (DCE 3). In that regard, the biblical accounts of the Last Supper, that must have guided Leonardo’s artistic inspiration, point to the meal Jesus shares with his disciples as a sublime expression of philia, the love of friendship, not eros. 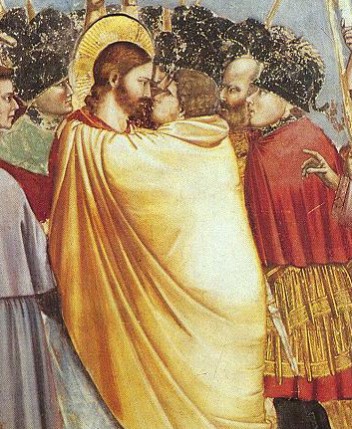 Giotto’s Kiss of Judas might likely be misinterpreted as badly as other works. Public Domain

Finally there is the New Testament notion of agape. Here we come face to face with “love in its most radical form.” Jesus’ death on the Cross is “the culmination of that turning of God against himself in which he gives himself in order to raise man up and save him” (DCE 12).

Leonardo’s painting gives visual expression to the love of agape: as Jesus gives “this act of oblation an enduring presence through his institution of the Eucharist at the Last Supper,” he anticipates his sufferings, death on the Cross and his resurrection by giving his disciples, in bread and wine, his very self, his own Body and Blood. As the pope writes, “the Eucharist draws us into Jesus’ act of self-oblation. More than just statically receiving the incarnate Logos, we enter into the very dynamic of his self-giving” (DCE 13). This is why perhaps even the earliest Christian depictions of the Last Supper in Roman catacombs are often cast as an agape meal.

What we see in Leonardo’s painting then is not the eros of Jesus and Mary Magdalene, but a visual representation of Christian love—of philia and of agape, the Eucharist as the “source and summit of the Christian life.” This is where “our definition of love must begin. In this contemplation the Christian discovers the path along which his life and love must move” (DCE 12).

Christian Art: A “Visual Gospel”
From Leonardo’s Last Supper the novelist Brown is inclined to draw out his “facts”: Christ was married, the Holy Grail is Mary Magdalene who sits beside him at the Last Supper, and the Church over the centuries has through various instruments suppressed the “truth” about a bloodline from Christ that secretly endured through history.

What are Christians to make of this and other mixtures of fact or fiction that dominate the popular imagination through printed and cinematic forms? Are such claims to be simply ignored as ludicrous, or should they be exposed as nothing more than, in the words of one French commentator, “une bonne farce,” a good hoax?

Moreover, how are the faithful to respond when a Christian image, such as Leonardo’s Last Supper, is given interpretations so contrary to Christian belief? What should we expect will follow in the popular imagination? Will Rembrandt’s The Return of the Prodigal Son be used to claim that belief in a God who forgives sin is ludicrous? Will Caravaggio’s Supper at Emmaus be interpreted to uncover hidden references to long censored pagan rituals? Will Michelangelo’s Pietà, for instance, be revealed as another attempt by the Church to suppress women? Or Giotto’s dramatic fresco in the Arena Chapel of Padua entitled the Kiss of Judas be exposed as nothing more than the repressed sexuality of the first Christian disciples?

Seeing with the Eyes of Faith
Christian faith is not something we have on Sundays or do whenever we engage in spiritual activities. Faith is an all-encompassing worldview. Faith colors the way Christians see the world, it inspires them to experience and interpret the world, often in radically countercultural ways.

Dan Brown looks at an artistic masterpiece of da Vinci and sees in it hidden codes, conspiracy, intrigue, subversion of ancient secrets, and the like. Following his example one can only imagine the anti-Christian claims that will emerge from fevered imaginations of future writers and film directors.

A Christian, on the other hand, looks at the artistic genius of Leonardo, and other masterpieces of religious and sacred art and architecture, and sees in them God’s revelation of love translated into paint, fresco, marble, stained glass and sacred music. Seeing with the “eyes of faith” we can discover in Christian art and architecture “witnesses to unchanging faith,” the “invisible made visible,” tangible representations of the core Christian belief that “God is love.”

Dan Brown and likeminded purveyors of pop spirituality may score on bestseller lists and at the box office. But Christians through their participation in and love for the Eucharist score even higher. For in every Eucharist we are transformed to see the world around us with the “eyes of faith.” And in every Eucharist we partake of the poverty of incarnate crucified love, a divine love that can never be mistaken for any other.

Jem Sullivan, Ph.D., Visiting Associate Professor in the School of Theology and Religious Studies at The Catholic University of America, contributes essays on art to Magnificat.