Paolo Veronese in an Age of Religious Reform

Paolo Veronese: Piety and Display in an Age of Religious Reform 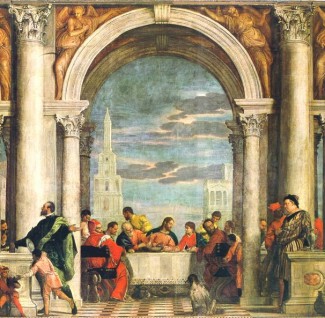 Paolo Veronese's Feast at the House of Levi

Artists, like pedigree dogs, go in and out of fashion. The borzoi hound was popular with the film crowd in the 1920s and the beagle, on account of the comic strip “Peanuts,” became a favorite in the 1960s. The golden retriever was the dog of choice on through the 1980s and 1990s. Likewise, artists themselves are subject to vogue. Erte was popular around the time as the borzoi. Then he had a comeback in the 1970s only to fall out of favor recently. Andy Warhol’s stock dipped in the 1970s but rose to great heights in the new millennium. And in this new millennium, certain artists of the Renaissance are beginning to be re-evaluated. One is Paolo Veronese, the sixteenth-century Venetian painter whose work is meticulously charted in a new and expensive monograph written by a scholar in East Anglia named Richard Cocke.

Billed as “the leading expert on Veronese in the English speaking world,” Professor Cocke’s book provides the reader with a virtual checklist of the artist’s most important paintings in a dazzling career that spanned over forty years. Dozens of illustrations (mostly in black and white) accompany the succinct text, and the author divides the chapters up with subheadings that make the reading easy and pleasurable.

While Titian was Veronese’s master and Tintoretto was his colleague and competitor, the full flower of artistic talent in Venice is presented against a backdrop of religious strife and the threat of foreign invasion. The Protestant Reformation had caused a cataclysm in northern Europe. The Council of Trent attempted to stem the revolt and artists were encouraged to paint pictures that preached a renewed faith. Venice remained firmly in the Roman Catholic camp, but the advancing Muslim navy threatened the eastern regions of the Mediterranean. Cyprus had fallen and the Christian governor there had been flayed alive. A tiny Christian fleet was formed to meet the challenge. A miracle was needed, and in the Battle of Lepanto in 1571 that miracle was granted. The superior Muslim force was routed, and the pope attributed the victory to the intervention of the Blessed Virgin and the Rosary. But the victory was short-lived as Venice turned a deaf ear to the pontiff’s plea for a new crusade and made accommodations with the enemy. Sensitive to claims that it had become an appeaser and a collaborationist, Venice tried to flaunt its orthodoxy in a flood of elegant religious paintings.

In 1573 Veronese was commissioned to paint a scene of the Last Supper for the Dominican refectory at SS Giovanni e Paolo, and the work was to become one of the most controversial in the history of art. Pictured in a grand architectural setting with three great arches, Christ was shown seated in the center with the Apostles broken up into three separate groupings. Forfeiting the usual solemnity of the scene, the painting shows a flurry of activity taking place around them. Veronese had gained a reputation for his depiction of festal gatherings, and it seems that the artist (or his unknown and unorthodox patron, as Professor Cocke suggests) desired to stretch his talent by introducing into the hallowed scene a number of “novelties.” These included the addition of German soldiers, a servant with a bloody nose, an exotic falconer with his hooded lanner falcon, a midget jester, waiters, a dog and cat, and an assortment of odd guests. Needless to say, this came to the attention of certain members of the Inquisition, causing the artist to appear before them on July 18, 1573. The transcripts of that meeting survive. Veronese acknowledged that changes were needed, yet his defense seemed to rest on a lack of communication between the artist and his clients. Veronese claimed that he did not even know the name of the Dominican prior in whose refectory the painting was to hang. He argued that he had been attempting to incorporate features found in other renditions of Christ feasting and that since the architectural setting was so large he was compelled to fill it with interesting figures based on his own judgment. Regarding that judgment, Veronese declared: “ we painters use the license employed by poets and madmen.” In short, freedom of expression was being used as an excuse for tampering with the sensitivities connected to the depiction of things dogmatic.

Was the shock of the new a good thing? Seemingly not, according to the Inquisition. Why? Because the added elements denigrated the reverence and soberness that ought to have accompanied this particular scriptural event. The Dominican theologians who would have to eat under it every day could very well have deemed the artist’s whimsical treatment inappropriate. Yet Veronese was supposedly painting not to please them, but to please instead his secular patron. Besides, if inventiveness is a hallmark of Western art, doesn’t the artist’s concept bear equal weight with the opinion of viewers? These and so many other modern questions of a philosophical and theological nature intersect with this event. Thus it is surprising, and a little disappointing, that Professor Cocke devotes only two pages to it. In other accounts the Inquisition is usually pictured as the big bad bogeyman trying to squelch an artist’s creative freedom. Yet how far had Western artists by this time in history strayed from the conforming regulations that still guided sacred art in the Eastern churches?

A compromise was reached by renaming the completed painting. The new title was The Feast in the House of Levi, thus removing any irreverence that could possibly be associated with a depiction of the event that led to the institution of the Holy Eucharist. After all, titles are always important. Andres Serrano would prove that point many centuries later when he created a photograph of a crucifix floating in a wondrous ethereal yellow liquid and titled it “Piss Christ.”

Despite his lack of digression on the religious and aesthetic ramifications of Veronese’s ill-fated Last Supper, Professor Cocke’s attention to the overall work of the artist provides the reader with a well-organized and useful volume. Replete with illustrations, the slim volume is indeed worth its weight in gold!

Rev. Michael Morris, O.P., is professor of Art History at Berkeley and author of a monthly column on sacred art in Magnificat.