The Netherlandish Image after Iconoclasm 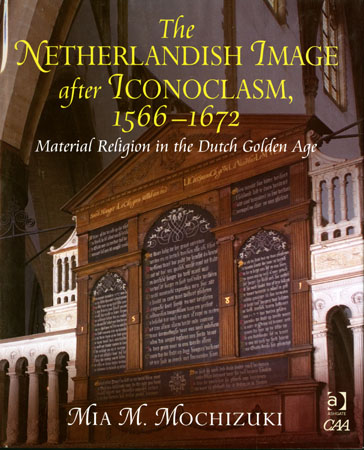 Reformation iconoclasm “stripped the altars” of northern Europe, the story goes, leaving bare and colorless churches in its wake. Contemporary Dutch paintings of newly Protestant interiors of the late sixteenth and seventeenth centuries seem to present Gothic spaces reduced to their whitewashed bones. But “we see what we expect to see,” Mia Mochizuki tells us, and it is worth taking another look at those supposedly empty churches. Her study centers on one church, Saint Bavo (or the “Great Church”) in Haarlem, an important artistic center and the second largest traditionally Catholic city in the Netherlands (after Utrecht). Both the theological and sociopolitical changes brought by the Reformation called for a far-reaching transformation of this space. The initial chapter of the book delineates Saint Bavo’s pre-Reformation material and social character, providing an excellent description of an important, late medieval Dutch Catholic church. The chapters that follow search for meaning in what was preserved and what was produced just after iconoclasm. In these objects the author discovers the systematic material expression of a new religious culture.

Mochizuki’s primary material sources are seven tekstborden, or text panels, installed in the church between 1580 and 1585: the Last Supper, which took the place of the former high altarpiece, with the Siege of Haarlem on the reverse; a now-missing Ten Commandments panel; Matthew and John panels; and the Linen Weavers’ and Greengrocers’ paintings (gifts of the guilds). The Last Supper, the centerpiece of the author’s argument, is a monumental “picture filled with large, glowing Dutch script emanating from a black ground, a floating panel of text grounded by a classicizing frame and draped with carved festoons of garlands” (127). Its text is a compendium of scriptural accounts of the Last Supper, while the Siege of Haarlem on the reverse tells the story of eight grueling months in 1572 when the city was locked in a struggle against the Spanish forces. Mochizuki deliberately calls these text panels “pictures” to emphasize that they employ the same techniques of figure painting and are similarly framed and displayed even though they contain no figural representation.

In these text paintings the author locates “the beginning of a lost alternate paradigm for picture making that began in Netherlandish churches after iconoclasm as a way to redeem and purify the fallen image” (127). In Haarlem, she argues, these paintings expressed the primacy of the Word (in the vernacular) and were a means of uniting a diverse community of believers into a new kind of Christian community centered on scriptural revelation and common history and experience. Her argument about the redemption of the image is similar to one made by Joseph Koerner in his study of the art of the German Reformation, particularly his explanation of the Lucas Cranach altarpiece painted for Martin Luther’s church in Wittenberg.1 These Reformation images, Koerner demonstrates, reveal the “iconoclash” that results when the iconic and iconoclastic impulses of a religious culture have to make peace with each other. In the case of the Wittenberg altarpiece, the figural image was rehabilitated as confessional text. The Haarlem example provides a rich Calvinist contrast: images made of words, housed in a magnificent architectural frame that suggested institutional authority.

Although the argument of this book centers on these text paintings, there is also much here for those interested in architecture. More difficult than changing pictures, the author acknowledges, was the problem of how to rehabilitate a whole building. She argues that the imprint of the divine body on the cruciform plan of the church was gradually camouflaged by the addition of new portals, a consistory complex, and many small shops around the perimeter of the building. A reinstituted classical temple vocabulary, believed to harken back to the early church, overlaid the Gothic. This “symbolic imprint on the face of the church” appeared in the form of small temples and obelisks, such as two classical temple capitals on the main pilasters of the former Baptismal Chapel (163). Biblical or early church precedent, as it was understood at the time, became especially important as the new national church used architecture to formulate its identity and reinforce its authority. Ultimately the Dutch forged their own architectural style that combined biblical foundations and mathematical regularity purged of both Catholic and pagan associations. This is best seen in the newly added consistories (the first a 1644 renovation of the former sacristy; the second a Salomon de Bray addition of 1658-59), structures that supported the activities that tied the Dutch Reformed Church to the civic life of the town. Similar consistories were incorporated into nearly all appropriated churches in the Netherlands. Mochizuki argues that the de Bray addition, which harmonized with the old building by reworking Gothic motifs into a regular façade with round gable windows, “drew together a society riven from its immediate past and filled with a fractious populace” (225).

This is an important book for anyone interested in the art and architecture of the Reformation, with an argument that goes far beyond what a narrowly defined case study might suggest. Mochizuki subjects nearly all of the material aspects of the building and its interior to critical interpretation. It is well worth plowing through the occasionally dense academic prose to discover fresh interpretation, attention to fascinating objects (or, as the author calls them, “the underdogs of art history”), and tremendous insight into the transformed religious culture of the Netherlands after iconoclasm.

Gretchen T. Buggeln holds the Phyllis and Richard Duesenberg Chair in Christianity and the Arts at Valparaiso University. She is writing a book titled Faith in Place, defining a vernacular approach to the study of religious architecture.