Building the City of God

The Space Between and Making Neighborhoods Whole 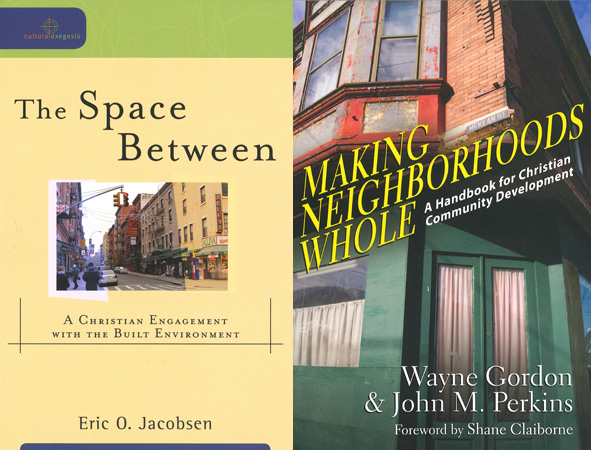 Few authors have considered the built environment in terms of Christianity. In his book The Space Between: A Christian Engagement with the Built Environment, Eric Jacobsen does just that. His discussion of an ambitious list of urban issues ranges from more utilitarian issues, such as the relationship of houses to streets and sustainability, to the more spiritual issues of the role of the Church in the built environment and its acknowledgement of the dignity of the poor. Using biblical references, the insight of major urban movements, and his own experiences, Jacobsen inspires readers to reconsider how the built form of their surroundings may inhibit their ability to lead a full Christian life.

Jacobsen artfully weaves together the linear progression of the story of redemption, which starts in the Garden and ends in the Heavenly City, with our understanding of the urban environment. He states that in our place and time we are not yet in the Heavenly City; however, we can and should work toward it.

As Jacobsen argues, our nature is flawed and our built environments are also, but to believe that either is intrinsically bad because of these flaws is to reject the truth, beauty, and goodness of being in the image and likeness of God. These flaws are a result of sin; thus, we are called to live out and work toward our collective redemption. As we encounter sin along the path of redemption, Jacobsen writes that there are three responses: nostalgia, revolution, and redemption.

Nostalgia, or the turning back to the way things were, is a reverting back to the Garden and is epitomized by aspects of the historical preservation movement as well as the romanticizing of rural life that pervades American sensibilities. Nostalgia ignores the fact that creation is not only meant to be preserved, but also cultivated and built upon for the ultimate good.

Revolution erases the memory of all prior knowledge and starts over. For example, the Urban Renewal movement revolted against the complexity of a traditional city, replacing it with repetitive groups of large buildings that denied the dignity of individuals living within the buildings. Revolution ignores the wisdom of the past and places all hope in itself.

On the contrary, redemption uses memory as a starting point and places its hope in God as it strives for higher levels of goodness in a community and culture. Jacobsen states, “To reject our placement within the flow of salvation history by nostalgically longing for an earlier time or trying to erase the past increases our sense of control or reduces our anxiety in exchange for a replacement…marked by banality and ugliness.”

Jacobsen goes on to discuss redemption and the role of the Church in the city by contrasting the embedded church (churches built directly adjacent to other buildings with their main façade and entrance on the street) with the insular church (churches built set back from the roads and largely surrounded by parking lots). He argues that the embedded church bears direct witness of faith to the surrounding community in simple but profound ways, such as the flow of the faithful walking by as they gather for worship. In this way, the embedded church communicates with, attracts, and welcomes pedestrians into the church from the street.

Meanwhile, the insular church is entirely isolated, and the only outward sign of the faithful gathering for worship is the full parking lot. At best there may be a large sign placed out on the road in lieu of the traditional open doors with a threshold that artfully communicates the crossing over to the sacred.

Jacobsen goes on to contrast the experiences of the faithful as they are dismissed. In the case of the embedded church, the faithful would exit through the sacred threshold, spilling out down the stairs and dispersing gradually into the surrounding community, with ample opportunity to love and serve the Lord along the way. Conversely, in the insular church, the faithful abruptly leave the “sacred space” to enter their private vehicles, drive for a distance, pull into their garage, and enter their house with virtually no interaction with the outside world.

Readers of all backgrounds have much to glean from Eric Jacobsen’s thought-provoking commentary regarding the built environment and its interplay with the Christian life.

Through a series of topical chapters supported by personal stories of their fellow members in the Christian Community Development Association, they argue that communities are developed largely on a personal level. The authors advocate their “three Rs” of community development: relocation, reconciliation, and redistribution. Since the cultural and political associations with these terms can be problematic, the authors work to redefine these terms.

Gordon and Perkins write that relocation is for the purpose of being physically present within the community that you are trying to help, rather than working from the outside to impose solutions. Reconciliation involves working to achieve understanding rather than to eliminate conflicts, and it requires the intervention of God. Redistribution is more about providing equal opportunity and less about taking from the wealthy to give to the poor, although the authors agree that we are to be stewards of the portion given to us and understand it in terms of the Bible verse: “All the believers were one in heart and mind. No one claimed that any of their possessions was their own, but they shared all they had” (Acts 4:32).

Both books provide clear examples of how we as Christians can work toward building the City of God in our interaction with those around us, and in shaping our built environment.

Kalinda Gathinji, RA, AIA, is a project architect currently working on mixed-use multifamily residential buildings in Bethesda, Maryland. She graduated from Notre Dame with a degree in architecture and a Masters of Architectural Design and Urbanism.