The Throne of Wisdom

The Virgin of Chartres: Making History through Liturgy and the Arts 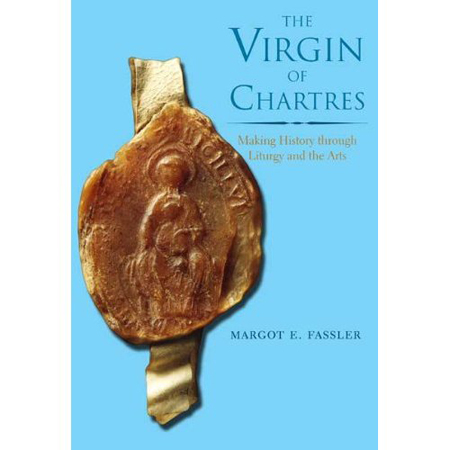 Each great cathedral gathers around itself a group of amateurs—lovers, really—who take upon themselves the task of interpreting and creating the meanings of the great multi-media work: an architectural envelope that leads us to the sublime; luminous multi-colored images that hang, suspended in the darkness; three-dimensional life-like sculptured figures—originally brightly painted—that provided the “virtual reality” of the twelfth and thirteenth centuries, and, most important, the living, human, performative dimensions: song, procession, pilgrimage, liturgical performance. In the Middle Ages such liturgical performances provided the interface between the resident body of clergy (bishop and seventy-two canons, plus ancillary personnel at Chartres) and different kinds of lay participant: patron; pilgrim; bourgeois; rustics. Margot Fassler opens her magnificent new book, The Virgin of Chartres, by locating herself and her work within the context of such Chartrephiles (if I may coin the term), past and present; in the pages that follow, she allows us to excavate layer upon layer of stories that have been told about this, the most-beloved cathedral of all. This is the construction of history.

Ecclesiastical institutions in the Middle Ages competed with each other to establish apostolic roots: the cult of saints and the liturgical arts, as well as the writing of chronicles provided the means by which such “histories” might be constructed. The story-tellers of Chartres took the narrative even further back in time with the myth of a pre-Christian female deity served by a community of priests, a Virgin about to bear (paritura). The cult with its pilgrimage was served by a sacred site: a miracle-working well, identified by eighteenth-century antiquarians as the well in the crypt of Chartres Cathedral. Margot Fassler strips away this layer of story-telling, documenting the relatively late origins of the myth in the fourteenth-century Vieille chronique, and its dramatic post-medieval embellishment.

The Marian dedication of Chartres Cathedral can be documented as early as the eighth century. During the episcopacy of Bishop Giselbert (858-879/85) the cathedral received from Emperor Charles the Bald (reg. 840-877) the gift of the great relic—the Virgin’s tunic—that would provide the essential mechanism for so much subsequent history-making. The author passes over this momentous acquisition with very few words: it is certainly true that the full implication of the event was only realized later through subsequent stories about miracles. The most famous early miracle came in 911 when a Viking band, led by Rollo, attempted to capture Chartres: “When suddenly Bishop Walter charged out of the city, robed as if to celebrate Mass, and bearing the cross and the tunic of the Holy Virgin Mary in his hands…” (17). Rollo, discomforted, withdrew and soon afterwards was baptized—Mary of Chartres had engineered his transformation. Fassler provides the reader with a fascinating account of the way this story was told and retold in subsequent writings; similarly, how the myth of the miracle-working well was fabricated and the story of the ignominious death of Bishop Frotbald during a Viking attack was turned into a glorious victory. Such stories were created and recreated in the tenth and eleventh centuries largely through the liturgy: they certainly helped establish the reputation of this city and bolster the status of counts and bishops at a time (the tenth century) of great instability and struggles between the family of the counts of Champagne/Blois (who controlled Chartres) and the Angevins, Capetians, and Anglo-Normans.

Bishop Odo (967-1003) appears to have been the first to systematically promote the Marian cult with the sancta camisa as its focal point—a major incentive was the need to raise money for the reconstruction of the cathedral, which had burned in 962. And it is from the tenth century that we first begin to hear of the sumptuous châsse that contained the chemise and of custom-designed chants like the Hac clara die sequence added to solemnize the cult of the Virgin.

The principal liturgical development of the tenth-to-eleventh centuries was the assembly of a coherent liturgical book on Advent. Advent is about arrival: advents. Originating in the ceremony for the reception of a ruler into his kingdom, a key text was found in Psalm 23: “Lift up your gates, O ye princes and be ye lifted up, O eternal gates: and the King of Glory shall enter in. Who is this King of Glory? The Lord who is strong and mighty: the Lord, mighty in battle.” The Church transformed the idea and the ceremony to mark the period of the year (four weeks) when the darkest days turned to light announcing the arrival of the Messiah. Margot Fassler repeatedly finds the sources of inspiration for the extraordinary sculptural program of the western portals in the same modes of thought and in ceremonial practices that lay behind the advents ritual as the column figures that populate the portals line up in a ceremony of greeting.

A devastating fire destroyed most of the cathedral on September 7, 1020, the vigil of Mary’s Nativity. The massive work of reconstruction and the continuing development and propagation of the cult of the Virgin went hand in hand during the episcopacy of Bishop Fulbert (1006-1028). New tropes and sequences were added and sermons preached to develop the theme of Mary’s lineage (prophetic and royal) and the story of her life. Bishop Fulbert’s preaching did much to propagate the metaphor of the strips Jesse—the Tree of Jesse—an image that was to enjoy a fabulous later life in Gothic art, while the “Book of the Cult,” attributed to Fulbert, provided a narrative for the life of the Virgin—and inspiration for the famous “capital frieze” that is such an important feature of the portal program of the western frontispiece.

The vibrancy of Fulbert’s episcopacy was later matched by Bishop Ivo (1090-1115). Ivo was a reforming bishop, whose sermons were intended to propagate Christian mysteries to a wide audience: he focused particularly on the story of Mary, seeing the Virgin’s tunic as a metaphor for the entire Church. Like Bernard of Clairvaux, he found inspiration in the Song of Songs.

In 1134 just before the feast of the Nativity of the Virgin Mary when the town blazed with the light of candles, another fire damaged the cathedral. Margot Fassler links the work of reconstructing the western frontispiece with its three portals squeezed tightly together between two towers, with the endowment of choral offices and the production of stained glass windows: critical to her thesis is the notion that portals and glass need to be understood as part of the same program as singing and processions. Particularly important is the way that the ideas developed in liturgy and preaching from Bishops Odo to Ivo found expression in the portal program, which is a vast speculation upon time, especially focussing upon Advent. The passage from Old to New is marked by the emphatic horizontal line of capitals that bring the story of the Virgin and the Nativity and Passion of Christ into present time. The figures lining the portals: kings, queens, prophets, and priests form part of the Old and belong to the lineage of Mary. The three tympana provide glimpses of the New and the yet-to-be. Particularly important is the presence of the Virgin Mary on the right (southern) tympanum as the Throne of Wisdom: the Wisdom of Solomon has been transformed into a new Logos with the incarnation of Christ. The Virgin’s body is the new Temple that is the Church, to be reunited with Christ at the end of time.

There is little not to like about this book. It tends at times to be repetitive and could have been a little shorter. This reviewer, an art historian, would have liked a more systematic description and visual documentation of the portals and windows. We may retain some skepticism about the extent that the non-clerical user of the building would actually be able to “see and understand” all, as the author suggests.

But, finally, The Virgin of Chartres is, I believe, destined to find its place amongst the classic works on the great cathedrals of the Middle Ages. It appears at a time when much of the work of many of the scholars of a previous generation who attempted to unscramble the meanings of the great church has been questioned: I think of the writings of Otto von Simson, Erwin Panofsky, and Emile Mâle. Scholarship of the past three decades has sought to establish new ways to unlock the meaning of the cathedral. This book, with its sweeping historical overview coupled with detailed analysis and transcriptions of the liturgical sources and investigation of the images, sets a new standard of excellence.

Stephen Murray, PhD, was educated at Oxford and the Courtauld Institute of Art, University of London. He has been teaching Art History at Columbia University since 1986. His publications include books on the cathedrals at Amiens, Beauvais, and Troyes; his current work is on medieval sermons, story-telling in Gothic, and the Romanesque architecture of the Bourbonnais.