Temples ... worthy of His presence 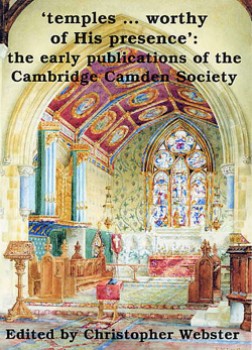 It seems only too seldom that people of high ideals make much of an impact on the general populace, let alone realize those ideals. This was not the case with regard to Augustus Welby Northmore Pugin and the Cambridge Camden Society. These names are of course synonymous with the nineteenth-century Gothic Revival Movement. Of that movement, Pugin and the Camdenians are amongst the most significant and arguably affected the Gothic Revival and the English Christian landscape more than any other of their colleagues. In the case of both Pugin and the Camdenians, they had a keen awareness of the iconographic importance of architecture and ornament, and they presented this vision passionately to their contemporaries.

It might be said that Pugin’s rather intemperate style was met by a more guarded style on the part of the Cambridge Camden Society, a group originally formed by Anglican undergraduate students. The Camden Society nevertheless got across the pro-Gothic gospel and did not fear to criticize the order and modifications of many Anglican churches of their day. So successful were they in spreading their message that, as J. M. Crook said in The Dilemma of Style, they “had succeeded in transforming the appearance of every Anglican church in the world.” They did so by producing inexpensive pamphlets that were strategically targeted to particular audiences in subject and in style. Eight of the first of these pamphlets have been republished for the first time by Spire Books and the Ecclesiological Society (the modern successors of the Camden Society) in “Temples ... worthy of his Presence.” Christopher Webster, the book’s editor, has done an excellent job in giving a critical analysis at the beginning of each pamphlet. Particularly edifying and informative is his general introduction in which he gives a good synopsis of the climate of the Church of England during the time in which the Camdenians operated; a climate characterized by tensions between Protestant “low church” theology and worship and the more Catholic liturgical praxis and theology being advanced by the “high church” Tractarians of the Oxford Movement. Webster neatly summarizes the basic beliefs and aims of the Cambridge Camden Society, which ultimately (if indirectly) found itself working in sync with the principles of the Catholicizing movement within the Anglican church. Supplementing the original pamphlets, Webster includes many drawings, photographs, and even editorial cartoons from Victorian times that bring to life precisely the state of affairs in English churches and worship in the period against which the Camdenians were fighting.

The pamphlets themselves give many details that highlight precisely the poor state to which English church buildings had fallen into by the time of the nineteenth century, often being treated in a desacralizing manner and with little regard for their ancient historical elements. Modern ears will hear an only too familiar problem when the Camdenians criticize the churches of their day. The society’s aim was to bring people, both educated and uneducated, back to the Gothic style, which they understood to be part of the inheritance of Anglicanism. They sought to do this both by restoring those Gothic edifices that had been altered by later generations and by laying down principles for the arrangement and design of new church buildings according to the Gothic style.

The Camden Society pamphlets are primarily oriented toward more purely architectural considerations, whether it be in the care and restoration, or in the building and study, of churches, though it does not take much to see the implicit message and motivation that lay behind their ideas. Some of the pamphlets are heavily laden with architectural terminology, making it slightly more difficult for the layman to read. Despite this, the flowery presentation of the details and historical development of medieval Gothic churches makes for edifying reading. Moreover, in the description of how to study ancient churches, many interesting details come up that paint a picture of the way in which the Reformation, and particularly the Puritan movement, modified the Catholic arrangement of English churches, giving us a sense of how theology serves to influence and shape sacred architecture. While all of these works are now more than one hundred and fifty years old, what is encouraging is that the debates we see raging today in Christian circles about appropriate Christian architecture were present then as well. This is encouraging in the sense that, like many problems that have faced the Church, this is nothing new under the sun; and if it is not new, perhaps we can trust that the phoenix will rise yet again from the ashes of architectural indiscretions. To that end, these works provide not only a basis for the first principles of Christian architecture—particularly if we dismiss Pugin’s absolutism of that which is not absolute—but should also provide an antidote to a time suffocated by iconoclasm, disregard for the past, and sterile modernism.

Shawn Tribe writes from London, Canada, has a degree specialized in classical and mediaeval philosophy and is founder and editor of the liturgical weblog, The New Liturgical Movement.