The Golden Road Out of the Desert

The Challenge of Emulation in Art and Architecture: Between Innovation and Invention

To even the casual observer, clearly the Himalayan heights of quantity and quality that Western art attained from the fifteenth century until the end of the eighteenth century have never been attained before or since. And indeed, one might even say that it is the casual observer who has most noticed this, since the more “educated” have usually been miseducated so as not to see it. But the more serious student (and one not miseducated) has no doubt pondered: “Why?” And “why then, and not now?” 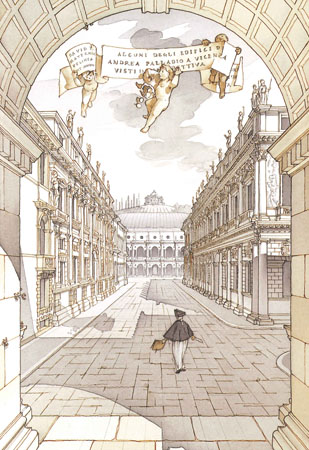 David Mayernik is such a serious student, who has spent most of his long career seeking the answer to these questions; and in this magnificent book, he offers to us the answers he has found. Although art amateurs will profit from this book, it is the art connoisseur and practicing artist whom it will most enrich. For frankly, a thorough understanding of the book requires a high level of art knowledge that few possess. Mr. Mayernik, artist-architect, makes the case that a fundamental change in the approach taken by artists was initiated in the early eighteenth century, and by the end of that century had poisoned the very wellsprings of Western art. From then until now, we in the West have wandered in a trackless aesthetic desert, relatively speaking; and Mayernik in this book gives us a map showing the way out of the desert. The way is to reject the capricious invention of the past two centuries, which is best known as modernism. But we must also reject the sterile imitation of the various “traditional” revivals of these years and instead embrace emulation, the “Golden Road” out of the desert, which leads to the artistic richness and fecundity experienced in the three centuries that began with the Renaissance.

And Mayernik makes his argument for emulation in the most persuasive and instructive way possible—that is, by doing it. This luxuriously illustrated book, predominantly—and uniquely—featuring the author’s own pencil sketches, oil paintings, frescoes, photographs, designs, and even his built buildings, is an astonishing tour de force. The book itself vividly manifests the author’s ideal of the architect as a broadly and deeply educated humanist, and a multi-skilled artist. Not surprisingly, this ideal, as portrayed by this new book on architecture, closely mirrors the portrait of the ideal architect delineated by the first-century BC Roman architect-author Vitruvius in the oldest extant book on architecture. This continuum across two millennia implicitly advances the proposition that the principles underlying the practice of a full and true architecture are immutable and eternal.

The book proceeds as a series of case studies of particular works of art. Each study illuminates further the nature of emulation versus imitation or invention. There are so many facets to emulation as an artistic approach—one so long abandoned since the advent of modernist art in the early nineteenth century, that like a just-discovered precious gem, it must be held up to the light at a number of angles if one is to comprehend it and see its brilliance. In illustrating each case, Mayernik draws heavily on his considerable acquaintance with a large body of academic art history. This is in itself novel, for practicing architects and architectural historians are seldom even on speaking terms. Despite the arcane hermeneutics of so much of this literature, the professor puts it to good use in helping himself more deeply understand what the creative process was like prior to the late eighteenth century. As he acknowledges: “I could not have made coherent choices [of study] without the mediation of historians. History at best tells us about principles as much as events, and lets us understand not just what happened, but how and why. With that information a modern architect or artist can engage with models from the past with coherence and creativity.” Arguably, it is this creative engagement with the past that is the book’s most urgent lesson for today’s practicing artist.

The Challenge of Emulation in Art and Architecture, as a kind of gesamtkunstwerk is in itself a compelling, persuasive argument in favor of his case for an emulative and syncretic approach to architecture. The book as a whole makes a much stronger argument than the book makes textually. The text is labyrinthine, detailed references are made to works of art that are not illustrated, metaphors are mixed, important terms left undefined, and concepts introduced but left undeveloped or unexplained.

But let me hasten to say that the book’s flaws do not make it a bad book—just a more difficult book. Yet despite its difficulties, it is a book any serious student of the arts would be well advised to read, and all who practice art or architecture should be obliged to read. To cite one reason why it should be read, in an art world afflicted by the prevailing ethos of “nonjudgmentalism,” it is a salutary tonic of great value to read Professor Mayernik’s confident assertion: “Contrary to the expected neutrality of most art-historical writing, I will be operating from the position that there was in fact a cumulative improvement in skill from the fifteenth through the middle of the eighteenth centuries.” In today’s parlance—no, it’s not all good.

The road map towards the recovery of architecture, after decades of decay, is presented in this ambitious book. The road may be at times meandering and hard to discern, but the book maps it out with unassailable erudition and convincing conviction.

Milton Wilfred Grenfell , NCARB, CNU, is principal of Grenfell Architecture, in Washington, DC, whose firm applies classical design principles to projects ranging from mantle pieces to town squares, from houses for people to houses of God.