Bramante’s Tempietto, the Roman Renaissance, and the Spanish Crown

The flood of new scholarship on Spanish Rome in the early modern world is certainly impressive if not somewhat bewildering, particularly since Elías Tormo’s two-volume Monumentos de españoles en Roma (1940) generated very little interest on the topic. Yet within the last fifteen years, many scholars have brought to light the rich contribution that the Spanish nation and community in Rome have brought to the Eternal City, making the subject ripe for further examination. Jack Freiberg’s wonderful new book, Bramante’s Tempietto, the Roman Renaissance, and the Spanish Crown, makes the compelling case that Spanish patronage in papal Rome in the late fifteenth and early sixteenth centuries resulted in some of the city’s most important architectural commissions, culminating in Bramante’s extraordinary Tempietto. Described by Fra Mariano da Firenze in his Rome guide of 1517 as a “large marble ciborium embellished with columns,” Bramante’s diminutive temple marked what was believed at the time to have been the site of Peter’s crucifixion. Situated in the first cloister of the Franciscan monastery of San Pietro in Montorio on the Janiculum Hill, the Tempietto is an exemplary monument that has received widespread admiration throughout history, even though—as Freiberg argues—its association with the Spanish nation has largely been overlooked. Built under the Borgia papacy of Alexander VI (a Spaniard from Játiva near Valencia) and commissioned by the Catholic monarchs Ferdinand and Isabel in 1502 on the tenth anniversary of the conquest of the kingdom of Granada and inaugural explorations of the New World, Bramante’s Tempietto is a powerful symbol of Spanish political and spiritual ambition. Freiberg’s excellent book, then, reframes the Tempietto from the perspective of cultural politics, situating it within a vast web of Spanish associations that extends far beyond the structure’s seductive architectural form. 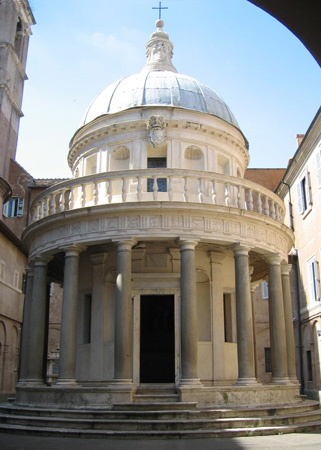 Tempietto at San Pietro in Montorio, by Donato Bramante, 1500. Photo by Steen Fastholm.

This book appears at the quincentennial of the death of Donato Bramante (1444–1514), and though centered on the Tempietto, it also considers the Roman churches of Santa Croce in Gerusalemme and San Pietro in Montorio, where Spanish interests were highly concentrated. Yet Spanish associations in the late fifteenth and early sixteenth centuries extended far beyond the immediate reigns of Ferdinand and Isabel, or the Borgia papacies of Callixtus III and Alexander VI. They embraced ancient rulers like Hadrian, whose family came from southern Spain. His villa just outside of Tivoli was the site of several excavations during the papacy of Alexander VI, and as Freiberg notes, “The Hadrianic architectural model provided the opportunity to draw a connection between the Tempietto and Spain’s imperial heritage traced to the reign of a Spanish emperor who had advanced the authority of Rome and was believed to have assisted the spiritual progress of the Empire toward Christianity.” Several ancient Roman monuments that would have inspired the Tempietto in form and iconography are also examined, including the Temple of Vesta in Tivoli, whose dedicated Sibyl (Albunea) was linked to Christian prophecy. According to legend, she had envisioned the coming of Christ during the reign of the “pacific bull” (Augustus, who established the Pax Romana). Pope Alexander VI changed his family escutcheon when assuming the chair of Peter, replacing an agrarian ox with a peaceful bull. In this sense the Catholic monarch Ferdinand could be seen as a Renaissance Augustus charged with instituting the pax Christiana.

Christian sources for the Tempietto are discussed as well, including the Roman examples of Santa Costanza, Santo Stefano Rotondo, the mausoleum of Theodoric the Great in Ravenna (who ruled in Spain as regent for his grandson, the Visigoth prince Amalaric), the Holy Sepulchre complex and Dome of the Rock in Jerusalem, and even Brunelleschi’s dome for the cathedral in Florence. All of these support the claim that the Tempietto—in its centralized plan, peripteral colonnade, and dome raised upon a drum—was fundamentally a Christian martyrium, a synthetic structure that fused elements of classical and Christian architecture to honor the site of Peter’s martyrdom and proclaim the political and spiritual aspirations of Spain’s Catholic monarchs. It follows, then, that nearly every aspect of the Tempietto’s architecture and decoration assumes new significance in Christian reinvention. The Doric columns, decorated metopes, shell niches, balusters, and geometric pavement on the chapel’s interior all contribute to reinforce the perception of the structure as a symbol of triumph. In legacy too, the Tempietto leaves a lasting mark on Western culture that far exceeds its conventional stereotype as the jewel of Renaissance Rome, as it became the source of much imitation, not just in Italy but in Counter-Reformation Europe as well. In paintings, engravings, portrait medals, ephemeral displays, and tabernacles, the image of the Tempietto was regularly enlisted to represent the Church and Catholic victory.

More than anything, Freiberg’s book reveals how Bramante’s celebrated monument to the Petrine origins of the Roman Church is situated at the center of a coordinated program of arts that exalted Spain’s role in the quest for Christian hegemony. Bramante’s Tempietto, the Roman Renaissance, and the Spanish Crown is a work so rich in scholarship that it leaves the reader begging for more—more text, more images, more color, and certainly more on Spanish Rome.

Victor Deupi is a Lecturer at the University of Miami School of Architecture in Coral Gables, Florida. His book, Architectural Temperance: Spain and Rome 1700-1759, was published by Routledge in 2015.