Out of the Mouths of Monkeys and Dragons

Palace of the Mind: The Cloister Silos and Spanish Sculpture of the Twelfth Century

It is cold. The first gloom of dawn reveals the forms of a wretched octet of shaggy apes, carved into the structural support of an abbey cloister in the hills south of the Pyrenees. Bound hand and foot, these degenerate descendants of Atlas bear the weight of a whole monastery on their shoulders. A young novice strides along the cobbled arcade en-route to his choir stall for Lauds. He catches sight of the tethered devils only for a moment, but in that time his thoughts are flooded with a torrent of associations. Monkeys, he recalls from his studies, are like men in appearance but unlike men in their capacity for reason—and are analogous to monks who don the habit of their order, but keep not the rule. He is also reminded that if one is to grow in grace and wisdom, one must bind the more bestial aspects of one’s own fallen nature. Despite these sober reflections, the boy cannot quite hold back the smirk of amusement that the ungainly and lascivious simians cause to dart across his face. 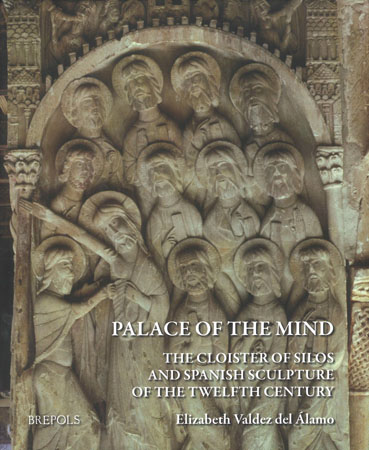 Palace of the Mind is an apt title for a book that so thoughtfully examines the admixture of corporeal and spiritual realities that lie ingrained in the masonry blocks at the Monastery of Santo Domingo de Silos.

In the eleventh century, a long-established religious community on the Silos site underwent a period of reorganization and liturgical reform under the leadership of Abbot Domingo, who was responsible for building a large church and initiating a series of building campaigns that would continue intermittently for generations. After his death in 1073, a cult devoted to the memory of Santo Domingo grew along with the monastic compound. The cloister where his relics were preserved is the most majestic result of this period of expansion.

Most contemporary scholars, including Valdez del Alamo, now agree with the views held by Meyer Shapiro: that the main portion of the cloister was executed between 1085 and 1100 AD. These dates are important because they imply that the Spanish sculptors who carved the capitals and pier reliefs at Silos must be recognized as co-originators of the monumental Romanesque style, rather than mere emulators of the French masons who worked at Moissac and elsewhere.

In the third chapter of the book, which focuses on the most important set of sculptures, the author takes her readers on a detailed tour of the cloister. The overall design is typical of Benedictine abbeys: four covered arcades enclose a square courtyard, and large masonry piers serve to buttress the tectonic thrusts set in motion by long arcuated colonnades making up the exterior sides of the covered walkway. Starting with The Descent from the Cross and concluding with a carving celebrating Pentecost, these images chronicle biblical events as they unfolded after the death of Christ and provide a convenient means for contemplating these mysteries.

The column capitals provide a contrast to the pier reliefs in subject matter, but, as the author makes clear, the overarching themes of death and resurrection are maintained. The subjects of these capitals are the “filthy monkeys, fierce lions, fearful centaurs…extraordinary things, at once beautiful and ugly” that Saint Bernard of Clairvaux so vehemently loved to loath. Bernard, in his riveting satirical epistle Apologia, asks: “What excuse can there be for these ridiculous monstrosities in the cloisters where the monks do their reading?” In more recent centuries many prominent scholars have submissively answered, “None.”

Contradicting the notion that dragons, lions, warriors, and monkeys have no proper place in the thoughts of holy monks, Valdez del Alamo elucidates the nuanced allegorical significance of the “Ridiculous Monstrosities.” For example, dragons possess all of the negative associations with Satan and his legions that one might expect, but, though terrifying, they can also be benevolent guardians of monastic property. To show another connection, the author quotes Augustine of Hippo: “When you consider the dragon, regard the dragon’s Maker, then admire the dragon, and say: Great is the Lord who made this thing! Then the dragon praises God by your voice.” By looking at the Silos carvings holistically, Valdez del Alamo helps us to understand the complex network of cultural associations that intertwine death, resurrection, and grotesque animal imagery into an elaborate and entertaining symphony of associations. The erudite monk who preferred to “take his reading from the walls rather than from a book,” scoffed at by Bernard, would have been treated to an intense literary experience at Silos, unparalleled perhaps even by that silver-tongued Cistercian’s own skillful oratory.

It is the reviewer’s opinion that the retrieval of twelfth-century imaginative methods among artists and patrons has the potential to revitalize a tradition of sacred art that has become stagnant over the last two centuries. In contradicting much of the received wisdom handed down through generations of art historians, Valdez del Alamo helps to better our understanding of the inner workings of the medieval imagination: a world vision in which the name of the Lord is so admirable that, out of the mouths of monkeys and dragons, praise can be fashioned.

Andrew Wilson Smith is an itinerant sculptor, stone carver, and teacher. His recently completed project, The Twelve Apostles, was carved into the grand portal at Our Lady of the Annunciation Abbey Church, Clear Creek, Oklahoma. Images may be found at www.AndrewWilsonSmith.com.