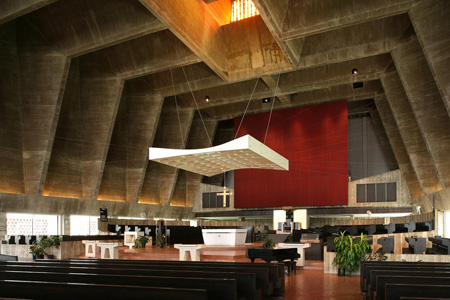 A building passes a certain threshold when entering its fifties. Whether or not it has aged gracefully after half a century, its presence has been so long as to have gathered both admirers and detractors. And it should hope for a significantly large number of the former, because it is also at this age that a building begins to exhibit needs for repair and upkeep, and if it is fortunate enough to have such a tribe, it will be loved.

Such is the case with Saint John’s Abbey Church in Collegeville, Minnesota, by Marcel Breuer, which is now fifty-six years old. In what can best be described as a biography of this mid-century modern icon, Professor Victoria Young tells the story of the conception, birth, and childhood of the Abbey Church and proceeds to establish for the building a place of prominence not only in the Modern Movement (which it deserves) but in the history and development of Catholic sacred architecture. Her book Saint John’s Abbey Church, Marcel Breuer and the Creation of a Modern Sacred Space, published in 2014, came a year in advance of a 2015 Getty Foundation grant in the amount of $150,000 as part of the foundation’s Keeping it Modern initiative, given to “assist the abbey in drawing a comprehensive plan for the restoration, preservation and maintenance/upkeep” of the church. It should also be noted that Saint John’s Abbey and Saint John’s University, among others, were financial sponsors of Professor Young’s work.

The book, both well written and researched, is most intriguing in the telling of the building’s conception through the marriage (one might also say, “co-branding”) of the Modern Movement (via the Bauhaus in Weimar) and the Liturgical Movement (via Maria Laach in the Rhineland). This conception, occurring during the post-war and pre-conciliar moment, saw both at the apices of their idealism and enthusiasm, and reflects Peter Blake’s sentiment of the midcentury zeitgeist that it must have felt “marvelous to be alive when utopia was young.”

While Professor Young makes a convincing argument for the importance of the Abbey Church in the history of the Modern Movement, and certainly as one of Breuer’s master works, she is less convincing and less thorough in her argument for the church’s importance in the broader expanse of Catholic sacred architecture. Young uses the term “spiritual axis” to describe a “processional way based on monasticism, liturgical reform, and modern design” (p. 67), and yet there is little indication of this application in the building other than the linear arrangement of entry, baptismal font, and altar: an arrangement not at all novel to the modern period. Most conspicuously absent in Young’s telling of the story of the Abbey Church is the context of church building in the United States at the time, and in particular of that going on in nearby Minneapolis and Saint Paul—most notably the work of E.L. Masqueray. Built in the first decade of the twentieth century, the Co-Cathedrals of Saint Paul and Saint Mary (the latter the first basilica in the United States) by Masqueray were significant works not only for the Upper Midwest, but for the United States as a whole. An article in the Fall 1910 edition of American Architect magazine, which included drawings of both cathedrals, noted that “the two Catholic Cathedrals will be . . . when completed, noteworthy achievements in church building for any period; in extent and splendor they promise to surpass anything yet attempted in ecclesiastic work in the United States.” This accolade is very much at odds with what the Abbey would contend in the last paragraph of the invitation letter to architects for the Abbey Church: “Our age and our country have thus far produced so little truly significant religious architecture” (p. 32).

Perhaps the most illustrative aspect of the book, however, is its subtitle. “Marcel Breuer and the Creation of a Modern Sacred Space” informs the reader at the outset that the story is one of a building and its architect. It is also about “modern sacred space,” a term of art which should not be confused with religious architecture, as it refers generally to space which is often only self-referentially “sacred.”

The monks of Saint John’s saw in modern architecture a vehicle for change (a Bauhaus credo is “start from zero”) and an opportunity to communicate the immanence of God at the expense of transcendence. Unfortunately they carried along also the baggage of the modern enterprise as a whole—a project that had no room for God. Sadly, neither does the building.

George Joseph Martin is a Visiting Associate Professor of Architecture at Mississippi State University and former Director of the Graduate Concentration in Cultural and Sacred Studies in The School of Architecture & Planning at The Catholic University of America in Washington, D.C.