Staging the Liturgy: The Medieval Altarpiece in the Iberian Peninsula 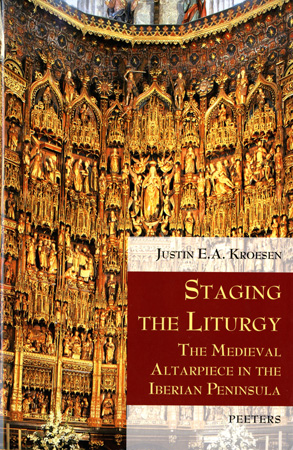 A brilliant study suffused with vivid historical commentary, this book elucidates the morphological, spatial, and communicative causes of the retable altarpiece in the late medieval and early Renaissance kingdoms of the Iberian Peninsula. The region is rich with in situ works and the home to an indigenous paradigm distinguished by extraordinary scale, structure, and content. Forming a compartmentalized backdrop of sacred imagery behind the high altar, the quintessential Iberian wall retable emerged from earlier traditions during the second half of the fourteenth century in the Catalan region of the Kingdom of Aragon and, with further innovations in Castile, reached its staggering apex in the unified Spanish realm during the Golden-Age reign of los Reyes Catolicos, Ferdinand and Isabella. The sanctuary vaults of cathedrals, collegiate and monastic churches, and even village parish churches came to be graced—quite literally—by immense, glittering screens of sacred figures and salvation narratives hierarchically disposed. Nevertheless, Dr. Justin Kroesen demonstrates that the principal hallmark of the Spanish altarpiece was not its exceptional size, but the wedding of a native structural composition with foreign artistic styles imported initially from France, then Italy, and finally Flanders. Through its use of symbolic and illustrative imagery that frequently spanned the width of the sanctuary, the Spanish wall retable served to reinforce the liturgy and direct private devotion in ways that were particular to deeply-rooted cultural and ritual customs of the Iberian Peninsula, while altarpieces in neighboring Portugal tended to be formal resonations of Spanish ones, albeit on a more modest scale.

The highly methodical and meticulous examination presented in this survey stands apart from preceding research in its treatment of the Iberian retable as a fundamentally liturgical category encompassing nationalistic traditions as well as localized practices; its reference to contemporaneous developments in other parts of Europe; and a catalogue of works that includes both painted and sculpted versions. The book is divided into three sections that deal with different aspects of the Iberian retable: its origin and morphological development is analyzed in Part I; its liturgical environment is discussed in Part II; finally, its iconographical content is expounded in Part III. Each topic is provided with a wealth of background information that brings to the fore the subject and its context according to type, time, and place. An appendix of high-quality black-and-white photographical images, drawn reconstructions, and architectural plans allows for easy comparison of similar situations, as well as linear and lateral transitions.

A strong understanding of and respectful attitude towards the Catholic liturgy underpin the historical sketches and insights provided by this self-identified Dutch Protestant author. He highlights, for instance, the precocious emergence of the Eucharistic tabernacle in the retables of the fourteenth-century Kingdom of Aragon, as well as the expositor windows that followed, which permitted visual access to the Sacrament for the purpose of adoration. One of the most fascinating discussions is offered in Part II where Dr. Kroesen investigates the peculiarly Spanish custom of locating the choir in the nave and the impact this arrangement had on the spatial and sensory experience of the retable by the clergy and laity. Excerpts taken from cathedral chapter records, directives of individual bishops and canons, and observations of contemporaneous foreign visitors animate the various conditions and circumstances in which the retable served to punctuate the liturgical functions of the sanctuary and stimulate private devotion. Other furnishings typical to Iberian churches, such as their richly decorated choir screens, are explored for their postural and iconographical relationship to the retable. The various situations for cathedral, collegiate, monastic, mendicant, and secular parish churches are systematically addressed. Quoting art scholar C. Belda Navarro, Dr. Kroesen refers to the retable as a religious projection screen, and in Part III begins a process of tying a trinitarian knot between the form, location, and function of the Iberian retable. The study presents the quintessential Spanish model retable as a backcloth to the Mass and homily, and focuses on its iconographical content. Correlations with other forms of sacred imagery are explored, including illustrated prayer books and devotionals. Finally, an account of the religious and social climates of late medieval Spain vividly underscores the role of the retable in its multicultural context.

Undoubtedly, with Staging the Liturgy, Dr. Kroesen accomplishes a Herculean feat in panning the height and width of a monumentally sumptuous subject and synthesizing it into a cogent thesis that is as encyclopedic as the Iberian wall retable itself.