Contemporary Problems of Being 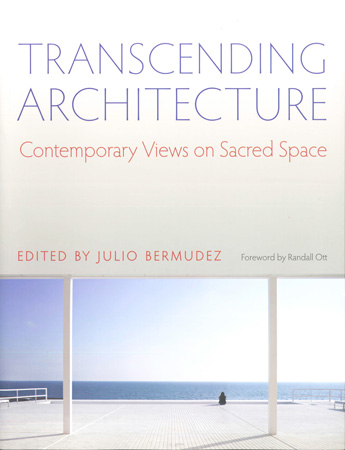 This declaration can be found in Fritz Neumeyer’s introduction to the collected writings of Mies van der Rohe. It is repeated in Karla Cavarra Britton’s contribution to Transcending Architecture, and it is abundantly supported by the essays collected in this more recent volume. Here too, problems of architecture are tied to problems of being, laid out in all their interdisciplinary complexity—provoking the dilemma expressed in the book’s opening pages by its editor, Julio Bermudez: “Are architects also called to be theologians, anthropologists, social workers, philosophers, and politicians?”

In an oblique response to this open question, the book brings together contributors from across these categories, their disciplinary breadth matched by their diversity of perspective. But among the common traits that hold the essays together is an underlying anxiety about contemporary problems of being. That anxiety is already legible in the intentional ambiguity built into the book’s title: as Karsten Harries asks in his contribution, “Who or what here is doing the transcending?”

Such ambiguity is a direct response to one of the more palpable “problems of being” facing the contemporary student of sacred space: that there exists no underlying consensus as to what constitutes the sacred. In the absence of such consensus, ambiguity is surely expedient. Although the publication proceeds from a symposium held in 2011 at the Catholic University of America, its eighteen authors do not share any singular confessional background. In this regard they are representative of contemporary culture on both sides of the North Atlantic—a pluralist culture marked, as Britton’s essay suggests, by an underlying ambivalence toward the sacred.

What particular insight does this ambivalence of views permit? Bermudez argues that the “semantic vagueness” of the book’s title “forbids closure, secures humility, and encourages new interpretations.” This equation of humility with a lack of closure is a relatively new calculation, one which prior generations might have questioned—perhaps appealing to the authority of the Epistle to the Hebrews, whose approach to the sacred is presented in terms of an architecture that answers with almost uncanny precision to the concept of transcendence, while equating faith with full assurance (10:19–22). It is doubtless worth recalling that—in theology no less than in architecture—the invention of new interpretations has not always been universally welcomed.

The photograph reproduced on the book’s cover is in fact peculiarly appropriate. It presents a project in Cádiz by Alberto Campo Baeza—a geometrically precise structure built to cover the remains of an archaeological excavation on a site described by the architect as occupying “the empty space facing the sea located between the Old and New Cathedrals.” If this can be associated with the sacred space of the book’s subtitle, the view is perhaps unintentionally analogous to the conclusions drawn by subsequent contributors. In its engagement with the sacred, an unambiguously contemporary architecture struggles to build with conviction a new cathedral of its own, not least because, as Harries puts it in a discussion of Heidegger, “the modern world picture has no room for either gods or the holy.” Its architecture instead finds itself occupying the empty space between older structures, forming a shell over what is ultimately an exercise in archaeology, and housing the relics of what was once, perhaps, a vital space.

Such is the challenge facing this book. Indeed, its subtitle reminds the reader that its collected contents are offered as “contemporary views on sacred space.” This choice of terms too is surely apposite, for unlike orthographic projections, views are fully dependent on the viewer, amenable to endless adjustment, and shifting in response to the slightest change in the viewer’s location. Contemporary cultural space is itself defined by such views, ostensibly privileging the experience of the individual over the assertion of universality.

Just so, the architecture of the book’s cover accommodates a solitary human subject, who sits near the edge of the architect’s empty, gridded terrace and gazes not toward the archaeologists’ excavation but rather out toward the emptiness of the flat horizon, where the North Atlantic meets an endless expanse of sky. Architecture here frames the individual subject, whose experience of nature seems to substitute for a robust belief in nature’s God. In fact Harries goes on to argue that the experience of nature is ultimately a cipher for the experience of the self. And similar shifts of attention are rehearsed in different ways by other essays in the collection. The view of the sacred shifts again and again, not toward that to which the architecture signifies, but toward contemplation of the self.

For this too prior generations might have found a description. But it would likely have been an unflattering one, for modernity’s architectural introspection is inclined toward substitution of the creature for the creator in an attitude reminiscent of what was once named idolatry. If that interpretation is not altogether new, it is certainly one of contemporary culture’s fundamental problems of being—one that searches with growing despair for what Harries describes as “a reality that transcends whatever human artifice can form and create.”