The Altars and Altarpieces of New St. Peter’s, Outfitting the Basilica, 1621-1666

Since its founding by Constantine, the fabric of St. Peter’s underwent a series of strange metamorphoses through the early seventeenth century. While the designs of Renaissance architects were never fully realized as the Early Christian structure was gradually dwarfed by a capacious, modified central plan, those initiated under the Baroque popes met with more success, particularly those of Paul V (1605-1621) who demolished the ancient vessel, and Urban VIII (1623-1644), who largely transformed the interior. Following completion of construction in the 1620s, and reaching a peak in the first half of the 1630s, a dazzling array of artists worked side by side creating a series of some twenty-four works of art, primarily altarpieces, which, in their programmatic relationship to one another and to the hagiographic traditions of the Church, proclaimed the complex identity of the Papacy and the liturgical mission of “the cathedral of the world.” 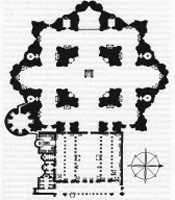 Louise Rice considers this altarpiece program as a collective whole, “reconstructing the historical, physical, liturgical, and devotional contexts for which they were created” such that “the multiplicity of factors involved in realizing a project of such magnitude” (2) can be appreciated. And a multiplicity there is. Omitting Bernini’s baldacchino, which serves as a finale to the campaign, as well as the related altars under the crossing in the sacre grotte, she focuses on the altar program proper, including the important sopraporti, the six imposing paintings over the doors of the navi piccole which were planned and created simultaneously with the altarpieces and as their ideological extension. She divides her narrative into three parts: “The Early History of the Altars in St. Peter’s,” “The Altars Under Urban VIII,” and “The Commissions,” this last a fascinating account of the mechanisms of patronage under Urban VIII and of the working conditions of the artists. She concludes with an extensive catalogue, listing the altars individually, organized chronologically under the popes from Gregory XV (1621-1623) to Urban.

In Part One, Rice shows how, in a foundation for which private patronage was now tacitly barred, two committees could effect the commissions with remarkable, even improbable, collaborative success. Acting on behalf of the pope, there was, first, the Fabbrica of St. Peter’s, constituted under Julius II and to whom the architect was directly responsible. Eventually, in 1605, the successor to this entity evolved into the Congregation of the Fabbrica which by 1623 numbered ten cardinals led by one, the Prefect. This group assumed increasing control of the decoration of St. Peter’s as the building neared conclusion in the 1620s. The wealthy Chapter of St.Peter’s, the second group, had little to do with the Fabbrica. This committee comprised beneficed clergy who supervised all liturgical affairs, with the exception of the pontifical domains. It was they who had had to accommodate, in practical, conservative ways, the inconvenient conjunction of Old and New St. Peter’s.

The first permanent altars of St. Peter’s were those commissioned by Gregory XIII (1572-1585), located in the north-east corner of Michelangelo’s new, centralized east end and its navi piccole. Rice usefully explicates the dedication and function of these, as well as the activities of Clement VIII (1592-1605) in this ambient where episodes relating to the life of Peter were begun. She also delineates Clement’s neglected and incomplete projects for the tribune and transept altars of Michelangelo’s building, using the surviving evidence of the stuccos. While Clement’s ideals were programmatic ones, the Constantinian nave posed an awkward obstacle to their full expression, and it took Paul V’s dismantling of the venerable relic to free his successors of its shadow. Gregory, as his aged successor, managed to commission only one work, Guercino’s St. Petronilla altarpiece, but with it begins the new cycle.

Urban VIII is the dynamic author of the Baroque altar series. As a former member of the Congregation, he was in a good position to oversee and understand the results of fact-finding Apostolic Visitations. In his pontificate, as the smaller details of dedication and iconography asserted themselves, the Congregation and the Chapter began to disagree. Nevertheless, with the official completion of construction in 1626 and the consecration of St. Peter’s, the Congregation and Chapter settled on the dedications of all the altars in St. Peter’s in less than six months. How they came to do this makes for intriguing reading. Rice provides a richly-documented outline of the backand- forth between the Congregation and the canons: the first prizing time and money, as well as programmatic (especially Petrine) coherence, while desiring to flatter the pope’s personal predilection for St. Michael. The canons, on the other hand, favored architectural unity, the retention of as many older titles as possible, and the equitable distribution of relics in all chapels.

A compromise was even reached over these issues. The dedications of the altars clearly dictated the subject in some instances (as with the Baptist in the baptismal chapel). Elsewhere, the idea of program, that is, of an iconographic dialogue between altars, emerged. The north and south transepts, for example, were reserved for martyr saints (lower ranking, on the Epistle side) and apostle saints (on the Gospel side) respectively. The Chapter had a crucial role in defining the subject, iconography and even the composition of several altarpieces, while the Congregation, to whom the artist was directly answerable, inspected and approved the cartoons.

Only three of the original paintings remain in situ today, while there are mosaic reproductions of approximately six others. Yet the family of works that resulted from this grand initiative were paradigms for future artists—works such as Guercino’s St. Petronilla, Andrea Sacchi’s Miraculous Mass of St. Gregory, Poussin’s St. Erasmus, Valentin’s Martyrdom of Sts. Processus and Martinian, and Alessandro Algardi’s relief of St. Leo and Attila. The altarpieces made concrete not only the accretion of hagiographic and liturgical lore attending the sacred property of St. Peter’s but, equally, and as a now lost academy in its own right, the profoundly competitive and rhetorical bravura of seventeenth-century painting.

Meredith J. Gill is Visiting Assistant Professor of Art History at the University of Notre Dame.