Books on ancient architecture are typically focused on a specific region or culture, whether it is Mesopotamian, Egyptian, Greek, Roman or pre-Columbian. They are written by specialists in a particular field and published for specific audiences. G. J. Wightman’s Sacred Spaces, in contrast, covers virtually every geographic region, time period and culture from the ancient world. In each case, Wightman effectively identifies the qualities that made religious buildings sacred to their respective cultures and communities while outlining the particular societal and religious qualities that made them possible. To do so he takes 1155 pages, with 318 figures and 184 plates; the total weighing an impressive eight pounds. 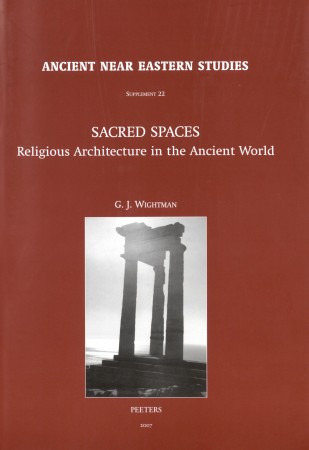 The book is divided into five parts: 1. the early civilizations of Europe and western Asia; 2. the Greco-Roman world; 3. central and east Asia; 4. the Americas; 5. a concluding section on themes and issues. It is perhaps best to begin with this final section, as it is here that he describes the types of societies that built the temple structures that remain as archaeological records for us today. Specifically, he identifies societies that were ruled by a small, centralized elite in which religion was hierarchical, with numerous deities, demons and spirits with specialized functions, who were envisioned in more or less anthropomorphic terms. Most were ruled over by a supreme deity with whom the worldly ruler often had a special relationship.

As Wightman states, temples were the primary loci of interaction between humankind and the gods, and many of these served as a place involving sacrificial ceremonies, processions and celebratory banquets. Most ancient temple structures had elements or objects related to rituals: benches, altars, basins and wells, eating and drinking vessels, and stands for light and incense.

The principal interior spaces were often the private domain of priests and rulers, although it was common to think of a temple as a house owned and occupied by a deity. The earliest temples had a close resemblance to houses; however, as time went on, they came to be more and more set apart from the rest of the city. They were not necessarily a god’s permanent home, rather, they were a space dedicated to a divine power who resided elsewhere. They were managed by humans but the deity visited on prescribed occasions.

There were other functions too. Temples could be a place where the living could honor natural phenomena and forces that affected their daily lives. They could be a place for asylum or a place where the living could commune with their ancestors to honor and reaffirm lineage. They could be a sacred mountain, symbolizing strength, permanence, and protection, a place that formed a bond between heaven and earth. In some cases the temple was related to a primeval earth mound or disk which emerged from the waters at creation and provided the foundation for earthly civilization.

In many cultures, religious practice invested temples and sanctuaries with a sense of spatial and temporal unity that was fundamental to the maintenance of social and cosmic order. The temples of numerous cultures were oriented on an east-west axis to reflect the solar path, especially those of the Egyptians and the Greeks. Curiously, those of the Mesopotamians and the Romans did not. In many Sumerian temple complexes, the principal organizing axis was oriented at about 45 degrees to the cardinal points; whereas later temples, such as those at Babylon or Nimrud, were oriented to the cardinal axes, which also corresponded to their surrounding urban fabrics. In Rome, the orientation of temples varied according to topography or location of principle streets and fora. Wightman analyzes in detail whether visual or metaphysical relationships extended outwards from the temples or were focused towards them, that is, whether the divine power looked out along the axis to experience a direct visual relation with a distant focal object, or whether there was some type of natural force flowing towards the temple and the divine being inside.

In most chapters, Wightman discusses buildings in the conventional way of describing their plan, exterior appearance, and function. In some chapters, however, especially on those ancient Roman temples, he analyzes them first in plan—what he calls the horizontal dimension—then he discusses them in elevation, which includes podia, stairs, columns, walls, entablatures, roofing and iconography. Wightman addresses each of these topics while citing numerous examples from Rome’s many temple structures and drawing comparisons.

In general, Sacred Spaces is an extremely informative, well-written and well-illustrated book. Most remarkable is the evident depth of Wightman’s expertise about every culture and every-out-of-the-way site, whether it is western European, Buddhist, Hindhu or pre-Columbian. The book has a seemingly endless supply of information, as each temple complex is described in great detail, always revealing some new and interesting insight into ancient building methods or concepts of sacred space.

John Stamper Ph.D is an architect and architectural historian in the University of Notre Dame School of Architecture and the author of several books including The Architecture of Roman Temples: The Republic to the Middle Empire and Chicago's North Michigan Avenue: Planning and Development 1900-1930.