A Glimpse of Heaven:  Catholic Churches of England and Wales 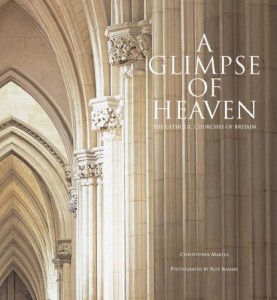 Christopher Martin’s A Glimpse of Heaven is a spectacularly illustrated gazetteer of over one hundred Catholic churches in England and Wales, photographed in color by Alex Ramsey. Described as for the “non specialist,” it is published by English Heritage in collaboration with the Patrimony Committee of the Roman Catholic Bishops’ Conference. Ramsey has found striking new photographic angles, often from galleries or high vantage points, which with control of exposure and of natural lighting make Dorset look like Tuscany and Hull like Palermo, achieving a heightened even surreal mood. Certain Modern Movement churches (Leyland, Liverpool, and Clifton cathedrals) photograph superbly too. This book follows on the English Heritage four-volume work on Nonconformist Chapels and Meeting-Houses (1986-2002) by Christopher Steel and Sharman Kadish’s Jewish Heritage in England (2006). (English Heritage is the government's statutory advisor on all aspects of the historic environment: it has been able to grant aid to historic churches since 1977.)

Martin (an Anglican) has not made this his life’s work (unlike Steel or Kadish). His difficult task, then, is to be a John Betjeman for the Catholics. Here his career in TV arts production helps, as in his sharply focused résumés. Has he succeeded? The answer is yes for the non-specialist, less so for the expert. Here the publisher may be at fault. The proofreading is appalling, with mistakes of names and dates; misquotations abound; there are no plans. There is an evident lack of connoisseurship. For example, the Cambridge window (11) does not date from the nineteenth century and does not show St John Fisher (but is post-1945 and is perhaps meant to be St. Thomas More.)

The canvas is very broad, from the Middle Ages to the 1990s (the chairman of English Heritage states that “the ancient churches” (7) were all once Catholic), with a preference for the broadly classical and for the hegemony of the twentieth-century Modern Movement. There is welcome emphasis on the Second Catholic Relief Act (1791), which legalised church-building and thus many pre-Pugin churches are described.

The balance is less sure for the twentieth century with no less than five Giles Scott commissions, but nothing by, for example, H.Goodhart-Rendel. This is a somewhat mid-twentieth-century mindset, the view of Sir Niklaus Pevsner, which canonizes Liverpool Metropolitan Cathedral. But this approach comes rather unstuck with the rebuilding (1989-1991) in the classical style by Quinlan Terry of Brentwood Cathedral, which “paradoxically ... looking determinedly backward … conforms to the liturgical expectations of the Vatican II” (216).

Liverpool Cathedral was the result of a competition, and its architect comes from a Nonconformist background; Terry is an Evangelical Anglican, and he was chosen directly by the bishop. However, the more normative architects of this culture were Catholics. A. W. N. Pugin, a fervent Catholic convert of 1835, was the founder of a dynasty of architects. Pugin’s conversion was to be followed by many other architects mentioned—all of whom took an integral approach to their religion and their art, which was a crucial aspect of the design and furnishings of their churches. The best example of this gesamtkunstwerk is Pugin‘s St Giles, Cheadle, (1840-6) a jewel box of color, detail, and liturgical and ritual elaboration. This artistic lavishness was often in tension with the tastes of the clergy and of church repository art. It was the aim of all-reforming movements—the Gothic Revival, the Arts and Crafts, the twentieth-century Liturgical Movement—to educate the former and eradicate the latter. The best examples achieved both: Pugin, J.F. Bentley; Giles Scott and Weightman and Bullen.

Much of the text is therefore about furnishings and atmosphere, most engagingly at Chideock, Dorset, an existing vernacular building adapted by the patron and decorated by his family, and with most romanità at Brompton Oratory, although the re-ordered St Joseph chapel (2005 by architect Russell Taylor) is missed.

The splendor of such new classicism at the Brompton Oratory stands in contrast with the doleful list of episcopally sanctioned vandalism (“re-ordering’) that followed the Vatican Council. But since 1994 works to listed churches and cathedrals must obtain agreement from the diocesan Historic Churches Committees, which have gained wide respect. The excellent reintegration of the interior of the Greek Revival style St Francis Xavier, Hereford, (1838) is a hopeful indicator of the future, at a church that the bishop wanted to close and sell. The Jesuit churches in Liverpool and Manchester, which came within an ace of closure in the early 1980s and 1990s, have been restored with English Heritage and Heritage Lottery Fund money, and now fulfil a very wide apostolate to the universities. This partnership between clergy, the people of God, and the “patrimony” authorities–the Historic Churches Committees, English Heritage, the Lottery, and the local planning authorities—must be the way forward. This lavish picture book will be a fillip to those who both use and study this Catholic patrimony.